Texas Tales, Cont’d. – A Tale from The Sixth Floor Museum at Dealey Plaza

Texas Tales, Cont’d. – A Tale from The Sixth Floor Museum at Dealey Plaza 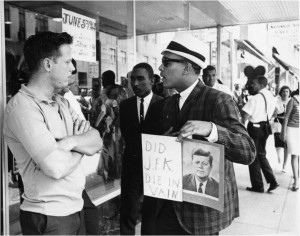 Tell me: what is going on in this picture?

This is the way I start a group talking about this photo, which is one of my favorite teaching tools.  This questioning approach, called Visual Thinking Strategies, is often used in art museums, but it works very well for historic photographs.  Adults and students alike have lots of thoughts about what is going on in this image, such as:

The answers range from the very literal to the very analytical. This process is good for building critical thinking skills and creativity in students.  The VTS strategy forces the viewer to ask questions and make statements without an immediate answer or feedback.  It forces them to look at details they might not have considered if someone had told them what the picture was about at the beginning.  The comment about the “Mickey Mouse ears” happens just about every time this picture is shown, until someone looks at that section of the picture more closely and realizes that it’s a man – in their words – “with an old-timey camera”.  (I can only imagine that the student thinks it’s “old-timey” because it isn’t digital nor is it the size of your hand.)  This inevitably leads to the next line of questioning: why are the people being filmed and/or photographed at all?  That is when I get really excited, as I know they are getting close to the story being told by the photograph.

Before I answer that question, I’ll address something that I know some of you have already asked: why is this one of my favorite collections items, as it’s a photograph taken months after the assassination of President Kennedy?  Part of the mission of The Sixth Floor Museum is to “chronicle the assassination and legacy of President John F. Kennedy”.  This picture tells the story of President Kennedy’s legacy, written just months after the president’s death by people like the man in this photograph.

The picture is of Clarence Broadnax (who made and is holding the sign) and the Rev. Earl Allen (to his right) protesting the segregation of the Piccadilly Cafeteria on Commerce Street in Dallas, TX  in June of 1964.  Mr. Broadnax, the first African-American hairdresser at the Neiman Marcus department store, had just gone to the draft office to register.  He was on his way back to work and went to the Piccadilly to eat lunch.  He was refused service and that began what was a 28 day peaceful demonstration, one of the few in Dallas.  The demonstration’s end was brokered by an engineer at Lockheed Martin whose son had been arrested during the demonstration.  The Piccadilly Cafeteria’s owner agreed to desegregate it only when the Civil Rights Act of 1964 passed on July 2, 1964.  (Check out a video of Mr. Broadnax and Rev. Allen retelling the story of this fascinating protest—“28 Days at the Piccadilly”—on our YouTube page.) 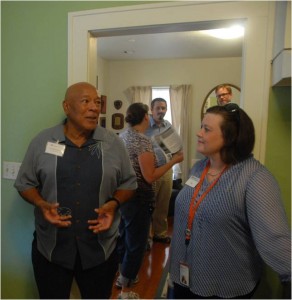 The above photo of me with Clarence Broadnax was taken on July 31, 2013 in the Juanita Craft Civil Rights House in Dallas, TX.  Juanita Craft (1902-1985) became a member of the NAACP in 1935 and was a real force for equality and change in Dallas and in the country.  You can read more about her here.

What’s touches me most about this photograph is that Clarence Broadnax and I are standing in Mrs. Craft’s kitchen talking about the Piccadilly Cafeteria demonstration that Mrs. Craft, Clarence and others had discussed in that very room so many years ago.  Mr. Broadnax emotionally recalled “the plotting and planning that went on at that table, at those chairs, in this place.  Plotting and planning for change and for peace in Dallas.”  It was, for me, as close to time travel as I’ve ever come.  I can now add my story to the one that I tell about this photograph.

The day after visiting the house, Mr. Broadnax shared his memories with a group of teachers here for  a week-long civil rights teacher training workshop.  He was asked about the sign he made during a live oral history interview.  Why did he connect President Kennedy with the Civil Rights Movement?  His answer was simple: “Kennedy was the first president to publicly stand up for people of color.”  He went on to reference this section of President Kennedy’s June 11, 1963 televised civil rights address:

“If an American, because his skin is dark, cannot eat lunch in a restaurant open to the public, if he cannot send his children to the best public school available, if he cannot vote for the public officials who will represent him, if, in short, he cannot enjoy the full and free life which all of us want, then who among us would be content to have the color of his skin changed and stand in his place?  Who among us would then be content with the counsels of patience and delay?”

The sign was a way for him to pay tribute to the slain president and make his point hit home in Dallas.

The story of the object is equally interesting.  The Dallas Sheriff’s Department found a box labeled “Jack Ruby” and decided to turn its contents over to The Sixth Floor Museum.  When the Collections department opened the box, at the back they found a stack of pictures with a rubber band around them and names written in pencil on the back of some of them.  The staff later discovered that these were surveillance photos that the Dallas Sheriff’s Department took during the demonstration at the Piccadilly Cafeteria.  People love this story almost as much as the photograph itself!  When you are able to see the actual photograph in storage, you notice that it is still curled on the edges from its many years spent rubber banded in that box.  Most often, though, the picture is viewed digitally on the Museum’s Online Collections Database.

This photograph and the sign Clarence Broadnax made is a powerful reminder of the power of words, spoken and written, and the way that our interpretation can change over time.

Have any of you had similar opportunities to get up close with history?  If so, please share them.

Ani Simmons is the Education Programs Coordinator at The Sixth Floor Museum at Dealey Plaza.