I moved to Texas from Connecticut six years ago. Moving from one of the smallest states in the country to one of the largest was a big change. I am constantly amazed by the size and scope of my new home state, and by the range of histories that can be discovered here. The “Six Flags of Texas”—a proud reference to the six nations that have ruled over the state…including the Republic of Texas!—meant nothing to me until I moved to Dallas in 2007 and started to learn about the many faces of Texas. There’s much to learn from what’s happening in the Lone Star State, so I recruited history educators from Austin to the Panhandle to share distinctly Texas tales about interpreting the history of this unique place. So, if you can’t make it south of the Red River, read on…Texas is coming to you!

Sharron Wilkins Conrad is Director of Education and Public Programs at The Sixth Floor Museum at Dealey Plaza in Dallas, Texas.

When Dallas Heritage Village began the process of converting our static, “do not touch” General Store into a hands-on, participatory space, the list of objects needed was overwhelming. 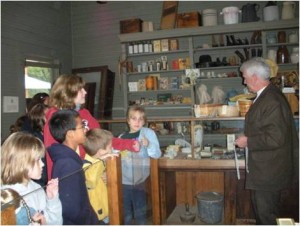 Our intrepid curator, Evelyn Montgomery, spent a lot of time searching for reproductions, appropriate historic labels, and artifacts that would be designated for educational purposes. We had many, many conversations about what items were “must have” to meet our educational goals. 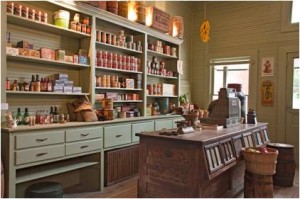 As the Director of Education, I also insisted on two objects that at first perplexed Evelyn: aprons and shopping baskets.

As we designed the General Store, we wanted visitors to think about shopping in 1905, but also about what it would be like to work there. But how to easily reveal those two paths without intrusive signage? Aprons and shopping baskets were simple tools for visitors to use to begin to imagine themselves in the past. However, we didn’t want to limit these tools to just children. Thus, we ordered aprons in two sizes, inviting adults to actively participate in the space as well. These aprons identify the wearer as a worker in the store, and after visitors put one on, they often pick up a broom or feather duster and get to work. 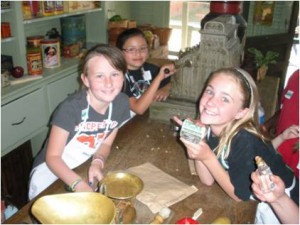 For the shopping baskets, we attached very basic shopping lists, complete with a budget. 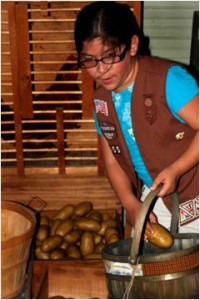 This particular activity led to one of our concessions to education over history. Historically, prices weren’t posted in general stores, and sometimes those prices changed depending on who you were. However, for this activity to work, we had to post prices somehow. We decided on small tags nailed to the shelves that also serve as a way to mark where different objects belong.

This exhibit has been open for two years now. It is truly amazing to see the difference these two objects make in visitors’ interactions with the space. (For more, check out this write up on the DHV Blog.)

As I suspected, adults are putting on the aprons—sometimes with the children in their party, and sometimes on their own. Families work together to find the items on the shopping list. Visitors of all ages love learning how to work the cash register. These objects, which help give some focus to their exploration of the General Store, lengthen the time visitors spend in this exhibit. We’ve had families with small children spend between 30 and 45 minutes just in this building. 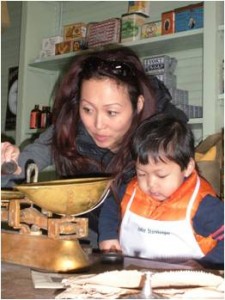 As a more traditional living history museum (few interior labels, some spaces with interpreters but most without), these kinds of visitor interactions with our spaces are new to us. Visitors aren’t just seeing history, they’re participating in it. The results of the General Store exhibit are changing the way we think about all of our buildings.

Today, we’re in the process of fundraising for the next building to be converted to this model of engagement, the Bank. A graduate student is currently working on a visitor evaluation project on the General Store, so soon we’ll have stronger data than just anecdotes and informal observations.

What simple items could be added to your exhibits that invite visitors to truly think historically?

Melissa Prycer is Interim Executive Director at Dallas Heritage Village at Old City Park. Prior to this appointment, Melissa spent many years as Director of Education at DHV.