The Bells of the 16th Street Baptist Church

The Bells of the 16th Street Baptist Church

Last month, I attended the AASLH annual meeting in Birmingham.  I had the opportunity to enjoy Southern hospitality at its finest, as well as meet other professionals that work in historic houses, museums, libraries, etc. from around the world. (I met professionals from South Africa too at the conference!)  I attended thought provoking sessions with noted scholars, educators and historians and took back ideas to implement in our education programs at the Jewish Museum of Maryland.  I also had the opportunity to meet the other members of Religious History Affinity Group at the conference and I look forward to working with them in moving the group’s mission of providing a forum in which history of all faiths may be shared, understood and appreciated.

I learned so much at the conference, mostly I learned about Civil Rights history in the city of Birmingham.  One of the most powerful memories that I have of the conference is sitting inside the sanctuary of the historic 16th Street Baptist Church. The impressive Byzantine-style structure, with two domed towers served as the hub for the mass meetings during the civil rights movement, drawing leaders like Martin Luther King Jr., Rev. Fred Shuttlesworth, Jesse Jackson, James Bevel and others. Marchers would assemble at the church and then cross the street to demonstrate at Kelly Ingram Park, the site of violent clashes between Birmingham police and civil rights activists. 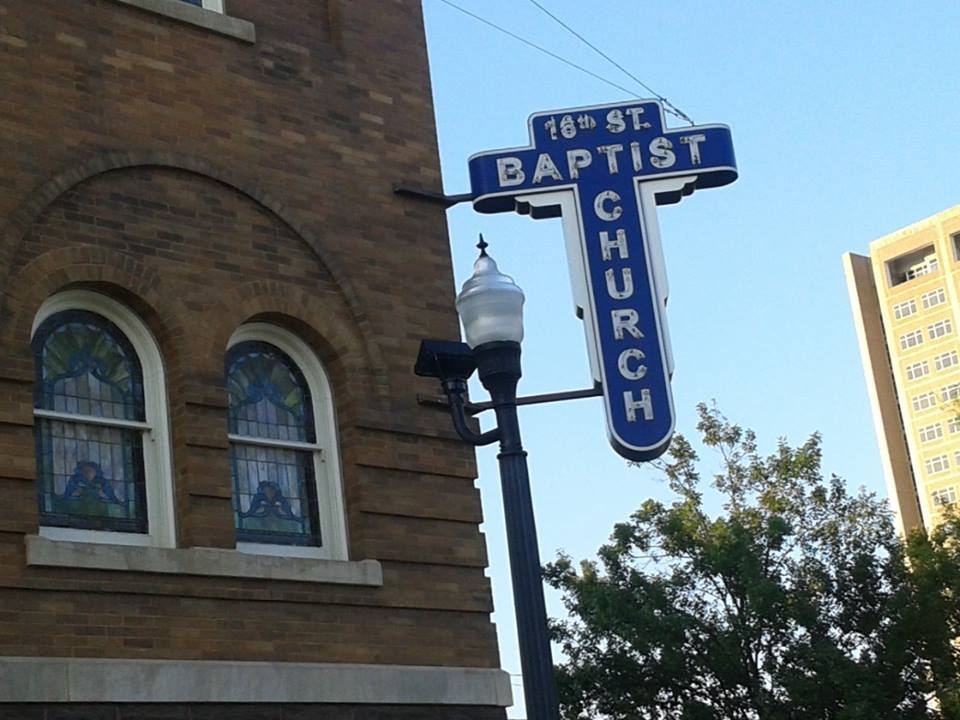 The sanctuary was packed- standing room only.  We were all gathered to listen to Carolyn McGinstry, a Civil Rights activist, who shared her account of September 15, 1963, when the 16th Street Baptist Church was bombed by white supremacists. The brutal attack and the death of four girls rocked the nation and drew international attention to the violent struggle for civil rights in Birmingham.

Carolyn shared her eye-witness account of what happened that day inside the church that killed her four friends.  The bomb exploded mid-morning, during Sunday services. Carolyn was 14 years old at the time, secretary of her Sunday school class. She was taking attendance records into the sanctuary when the bomb went off.

Carolyn spoke about her involvement in the civil rights movement as a teenager.  She was among the thousands of students hosed by firemen during the 1963 marches. She survived a second bomb explosion that destroyed a large portion of her home in 1964. During these trying times, Carolyn remained true to her faith and years later would speak to thousands of people all around the world about how her experience has shaped her life and has inspired her work in the Ministry of Reconciliation and Forgiveness.

In the Jewish tradition, there is an obligation to remember – Zachor.   This obligation does not end with the cognitive act of memory; it must be connected to meaning and action. The act of learning is the act of acquiring knowledge and from that knowledge we can learn lessons, take action and strive to improve ourselves.

Carolyn’s important work through the Ministry enables her to pass on the torch of memory to the next generation.  Carolyn’s message is important in that her story allows us to learn about an important time in our nation’s history; an event of extreme human and ethical significance.  Through her story, Carolyn has provided us with education and knowledge; in the hope that we will remember, take action and promote change.   It was a privilege for me to listen to her “story. ” – ZACHOR

Ilene Dackman-Alon is the Director of Education for the Jewish Museum of Maryland and is a member of the AASLH Religious History Affinity Group Committee. She can be reached at [email protected].