The Birth of an Exhibit

The Birth of an Exhibit

People just keep asking about Elmer, Elmer being Elmer McCurdy, an outlaw turned sideshow mummy. In March, producers from the T.V. show Mysteries at the Museum contacted the Oklahoma Territorial Museum about doing an episode on McCurdy. In the course of the week, two other people approached me about the story. I knew the basics: inept outlaw killed in a shootout with law enforcement, mummified with too much arsenic, sideshow attraction for 66 years, and buried in Guthrie after being found in a California funhouse. I needed to learn more.

I pulled the vertical file on McCurdy, took down the two books in our research library on the story, and started reading. One book mentioned that McCurdy had been shot with an automatic revolver. The L.A. county autopsy report noted that it was approximately .32 caliber. The director of the museum told me that we had a collection of artifacts from the family of Stringer Fenton, a member of the posse. I immediately pulled the accession file and poured over the list; pictures, documents, and guns. One gun grabbed my attention, a 7.65, 1900 “Commercial” Luger. 7.65mm is approximately .32 caliber. Did we have the gun that killed Elmer McCurdy? 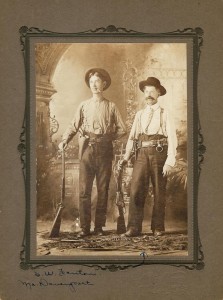 The Gateway to Oklahoma History is an incredible resource, The Oklahoma Historical Society has been digitizing newspapers since 2009, and it was instrumental in researching McCurdy and Stringer Fenton. In an October 15, 1911 issue of the Tulsa World, I found an interview with Fenton at the Tulsa train depot, where he stated “a bullet from my Luger automatic had also went through the center of one of his suspenders and nearly through the right side of his body.” I now knew that Stringer Fenton used the Luger in the gunfight with McCurdy and had probably killed him with it.

McCurdy has been portrayed as an inept outlaw, but research shows otherwise. At the turn of the twentieth century the middle of America was plagued by “Yeggs” or “Yeggmen,” (safecrackers). These Yeggs traveled from place to place, used numerous aliases, and robbed rural banks, post offices, and stores. They didn’t practice finesse. Brute force, in the form of nitroglycerin, unhinged safe doors, destroyed bank interiors, and melted silver coins inside the safe. Losing some of the silver was a cost of doing business. The Yegg description fits what we know of McCurdy.

Listening to our audience led us to do research, and the new information led to an exhibit that questioned long-held beliefs regarding the story of Elmer McCurdy. Our exhibit addresses these misconceptions and portrays McCurdy as a career criminal rather than as a bumbling fool. It also shines a light on the hero of the story in 1911, Stringer Fenton.

The exhibit won two awards from the Oklahoma Museums Association in 2014 and is available as a traveling exhibit.