The History of the AASLH Religious History Community

The History of the AASLH Religious History Community

In 2007 I attended my first AASLH annual meeting in Atlanta, Georgia. Being new to the AASLH scene I primarily kept to myself as I attended sessions and walked the exhibitor’s hall. While in Atlanta, I took the opportunity to visit many of the local historic sites, including the Martin Luther King Jr. National Historic Site. This site encompasses much of the neighborhood surrounding the birthplace home, including the Ebenezer Baptist Church. During my visit I saw how religion played a key role in Dr. King’s life and subsequently the influence in had in his role as a civil rights leaders. 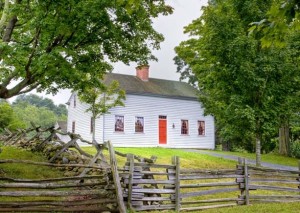 AASLH met in Rochester, New York in 2008. Just a short distance away from Rochester are three historic sites related to the beginnings of Mormonism. Because of this and my positions as a historic sites curator with the LDS Church, I quickly became involved as a long-distance member of the host committee and organized one of the conference tours. During the drive to the sites, Deborah Hughes provided an overview of the Burned Over District which set the context for Joseph Smith and the sites we planned to see. I lead the group through the Joseph Smith Farm, to the top of the Hill Cumorah, and to the Grandin Building, the publication site of the Book of Mormon. I was very surprised at the geographic and religious diversity of those who signed up for the tour and caught off guard by their interest in the historic sites related to the founding of Mormonism, a faith different from their own. Their interest intrigued me and I began to pay attention to where attendees were from and what organizations they represented. I soon learned there were a number of AASLH members who represented religious organizations or other whose organization has a strong religious story that is part of the history they share.

During the next two meeting I attended (Oklahoma City in 2010, Richmond, Virginia in 2011), I again sought out those who had a focus or an interest in religious history. As I did I continued to be surprised by the number involved with religious history and I suggested the creation of a new affinity group with AASLH staff. After consideration, I received word that AASLH would sponsor the Religious History Affinity group and I was asked to serve as its first committee chair. Quickly an amazing group of talented and well respected individuals accepted the invitation to serve on the committee and we made plans to officially kick-off the new affinity group at the annual meeting in Salt Lake City which was held last year.

This past year has been spent in reaching out to those who have an interest in sharing and preserving the religious history of their communities and organizations. As stated in our purpose statement we strive to provide “a forum in which the history of all faith communities may be shared, understood, and appreciated” and to serve “as a resource for sharing best practices in research, interpretation, and exhibition of religious history, particularly for those organizations with minimal experience in these areas.”

Religion has played a significant role in crafting the character of both people and places across the United States. It is the goal of the Religious History Affinity group to assist in raising the visibility of the role religion and faith have played in state and local history and to support those institutions in interpreting and sharing this sacred, complex, and often volatile aspect of their past. As we establish networks, collaborate with other institutions, and learn best practices this often forgotten and sometimes purposefully ignored aspect of state and local history can be interpreted and shared by organizations in respectful and appropriate ways.

If you are part of an institution fully devoted to the preservation and sharing of a religious heritage, have questions on how to interpret the religious history of your community, or simply have a personal interested in religious history, I invite you to join the AASLH Religious History Affinity Group.  Our membership is open to all and we are desire to have our membership reflect a broad range of faith communities, institutions, and geographic locals in order to enhance and bring diversity to the group.