It may surprise the thousands of visitors who have vacationed on the island of Santa Catalina, but the Catalina Island Museum (AASLH Members since 2001) has never had a permanent home. The museum opened in 1953, leasing a small space on the ground floor of the island’s most famous landmark–the monumental 12-story architectural extravaganza called “the Casino.” The museum has thrived during its over sixty years here, and that’s not surprising.

Nearly a million visitors a year come to this small island just 26 miles off the coast of Los Angeles.  They find sun, beaches and the small town of Avalon, a place that time seems to have forgotten.  No tattoo parlors or fast food joints here; they’re strictly taboo.

In their place are intimate restaurants, quaint shops and quiet palm-lined paths, evoking the island’s heyday: the 1930s and 40s. This was an era when Hollywood heavyweights like John Wayne, Errol Flynn, Clark Gable and Humphrey Bogart discovered the perfect tonic to the pressures of movie stardom. Visitors to the museum find evidence in its scores of photographs and artifacts that what they’re texting suspicious friends back home is true: this little island has changed imperceptibly since its Hollywood heyday. Before she transformed herself into Marilyn Monroe, Norma Jeanne Dougherty was a young bride living in Avalon, and in a museum photograph she poses proudly on one of the town’s beaches, the Casino in the background. Charlie Chaplin wrote Modern Times on his boat anchored just off the harbor, and he’s photographed on a bicycle-built-for-two with his wife, the vivacious Paulette Goddard.  Winston Churchill fished the waters off Avalon’s beautiful harbor and with his inimitable luck hooked a marlin in record time. The Chicago Cubs and a bevy of Hall-of-Famers conducted spring training here for thirty years. And get this: Ronald Reagan broadcasted their games live on the radio, before leaving one afternoon for a screen test that eventually landed him a job in the White House. 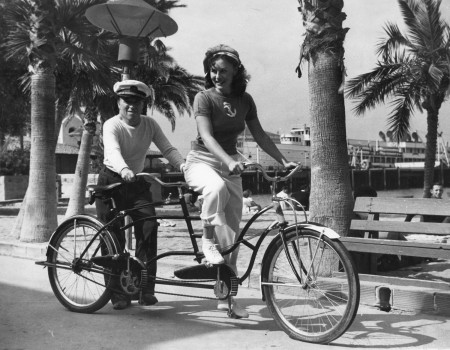 The museum claims nearly 2,000 members; and that’s not bad in a town that is only twice that size. More than ten years ago, the museum began to plan for a new building, and in 2009 it bought a plot of land in the heart of the town, where its old City Hall once stood. Three years ago, construction began in earnest.  A $10 million capital campaign was initiated, and a steel and concrete structure of some 18,000 square feet began to rise—the most ambitious project on the island since the construction of the Casino. To honor William Wrigley Jr.’s granddaughter–a well-respected and recently deceased member of the museum’s Board of Trustees–it was named the Ada Blanche Wrigley Schreiner Building.

With the opening of the museum in June, the small town of Avalon will have two magnificent works of architecture: one devoted to culture and, the other, to entertainment. Not surprisingly, the two buildings bear more than a passing resemblance. Elements stemming from the Spanish Colonial are unmistakable in each building. In the 1930s, P. K. Wrigley, who had inherited the island enterprise upon his father’s death in 1932, initiated a campaign to coalesce the construction in the town around the central theme of “Old California.” It wasn’t long before the red tile roofs, porticoes and colonnades of traditional Spanish architecture began to spring up around town. They’re present in the museum building too. But the museum pays homage to the style that directed much of the Casino’s making: the Art Deco of the 1920s. This is most apparent in the building’s central façade, which soars to over thirty feet in the air. It looms large and stately over the entrance to the museum. Its highlight is near its top, where scroll-like Art Deco ornaments flank an area forming the building’s “crown.” Immediately recognizable to any baseball fan, the area imitates the famous marquee that still stands at Chicago’s Wrigley Field It’s a respectful tip-of-the-hat to an important piece of island history, recalling the Wrigley family’s long relationship with the “Windy City,” and their past ownership of America’s most loveable baseball team, the Chicago Cubs.  The façade, like much of the building, balances nobility with whimsy, and this is perhaps a perfect note—a playful note–to strike for a building whose main purpose is to exhibit the history of a “vacation paradise,” where fun is the order of the day. 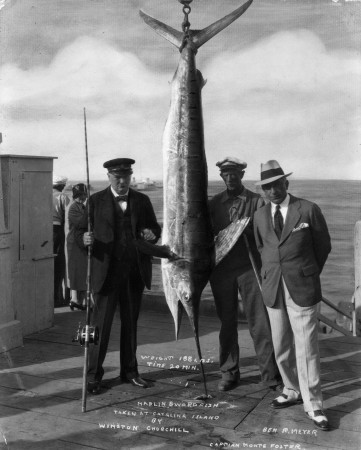 Winston Churchill fishing during a visit to Santa Catalina Island

But the real fun of this museum begins in its new galleries. The museum has built a reputation for the innovative design of its exhibitions, and the only complaint most visitors have with the present museum is its small size. After all, the museum is responsible for exhibiting more than 8,000 years of history and a story that is rich in events and personalities. In the new building, a large, expansive gallery is dedicated to telling the tale. Finally, there’s enough space to exhibit the hundreds of photos and artifacts that have been tucked away in the museum’s vault for years.

In an adjacent gallery, the plan is for the museum to bring to the island “special exhibitions” that are not necessarily related to Santa Catalina’s history. The first of these exhibitions is dedicated to Bettie Page, the “Queen of Pinups,” whom many have called a “Pulp Goddess.” Before her disappearance from the pinup scene, she was one of the most photographed models of the 1950s. In Bettie Page Uncovered: The Unknown Photographs of Bunny Yeager the museum has organized a show of photographs that represents the first exhibition dedicated to Bettie Page in a California museum. The entire exhibition is composed of photographs taken by Bunny Yeager, Page’s most celebrated photographer. Before her death in 2014, Yeager was living in Miami and supplementing her retirement by selling on the Internet the photographs she had taken of Page during a 9-month period in 1954. A Berlin gallery owner, Helmut Schuster, admired her work, knocked on her door and was stunned to find not only Yeager but an archive of nearly 1,000 photographs of Page, many of which had never been exhibited or published. In 2011, Schuster worked with Yeager to mount a major retrospective of her work.  The exhibition received rave reviews, and it catapulted Yeager’s photography to the forefront of the art world. Since that show, a number of books, movies and exhibitions have continued to explore the unusual relationship of these two women, who collaborated in the male-dominated world of pinup photography to produce what American Photo calls a  “body of imagery that remains some of the most memorable…and endearing” ever produced of Page. Known for the sensitivity with which she approached women models, these extraordinary photographs reveal why, upon Yeager’s death, the New York Times wrote: “She is widely credited with helping turn the erotic pinup—long a murky enterprise in every sense of the word—into high photographic art.”

For its grand opening celebration, the museum is planning a slate of events, films, opening receptions and musical performances that cover the two-week period from June 18th to July 4th. The museum is honored to welcome The Mystical Arts of Tibet. The monks of the Dreprung Loseling Monastery, who will painstakingly create a mandala sand painting in the museum’s lobby from June 26th to July 4th. On July 3rd, the famed multiphonic singers from the monastery will perform traditional temple music and mystical masked dances entitled: Sacred Music Sacred Dance for World Healing. 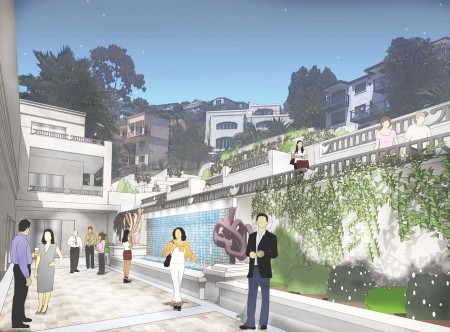 Additional details about the Ada Blanche Wrigley Schreiner Building, including the full schedule of Grand Opening events, can be found on the museum’s website: www.CatalinaMuseum.org.

The Catalina Island Museum is Avalon’s sole institution devoted to art, culture and history.  The museum, its digital theater and store are currently located on the ground floor of Avalon’s historic Casino and are open 7 days a week, from 10:00 a.m. to 5:00 p.m. For more information, the museum may be reached by phone at 310-510-2414 or at its website: CatalinaMuseum.org.