The T-Rex of Awesomeness

The T-Rex of Awesomeness

When two museum friends gather, you often end up going to a museum. Such was the case last fall, when I headed to Chicago for my friend Natalie’s wedding. Since Natalie was my roommate at SHA, it should be no surprise that we had a museum day in Chicago just two days before her wedding. And like any good museum visitor, I made purchases in museum stores: a necklace at the Frank Lloyd Wright House and an ornament at the Field Museum. But neither of these two lovely souvenirs compared to the sheer bliss of the Mold-A-Rama T-Rex I made at the Field.

For $2, you can watch as liquid plastic is injected into a mold and out pops your souvenir, still warm.  Here I am, grinning like a little kid in front of Sue in front of a T-Rex mural. Yes, that means three dinosaurs in one photo! 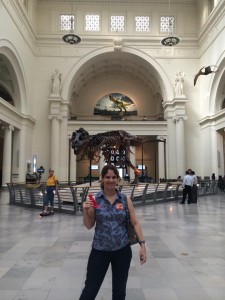 At any rate, once I got home, I thought that perhaps the T-Rex belonged in my office. And then I had another thought: what if I shared him with my staff? I sent the following email:

He brings me great joy, but I feel that I should share that joy.  So, I’m instituting a The T-Rex of Awesomeness Award, for those times when we as staff members have to fight very frustrating battles or overcome strange obstacles placed in the path of our work.  After all, the T-Rex has very powerful jaws and a loud roar, but I can’t help but think that his tiny arms sometimes limits his power.  None of you have tiny arms, but there are a million and one tiny things that limit our power to get things done.

When I sent this note out, I did worry—would my staff think that I had finally gone over the edge of sanity? There was some precedent in the office of passing odd things around—for years, we’ve been hiding this lovely wolf statue in people’s offices. But that’s more a prank than a “hey, you’re doing a good job” kind of thing. 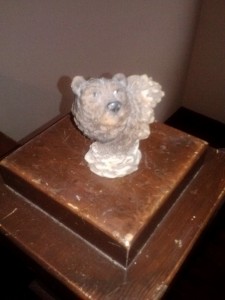 But here’s the thing—that little T-Rex is totally doing what I hoped it would do. Staff members do want it on their desk as a reward for a job well done. It does provide encouragement when it feels like the world is against us. And when it gets handed to another staff member, people are sad to see it go.  There may even be whining.

There are perhaps two lessons to learn from the little guy. First, never underestimate the power of a simple token to thank staff. I’d love to give my staff raises or bonuses or a fancy holiday party, but that’s not in the budget cards right now. And while having a red plastic T-Rex doesn’t take the place of those kinds of things, it does say a lot about my appreciation for all the work they do. 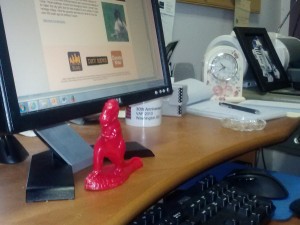 The T-Rex in his current natural habitat, Evelyn’s office

Secondly, never underestimate the power of a goofy, but still totally mission appropriate , souvenir. I will continue to buy tasteful souvenirs such as necklaces and ornaments at museum stores, but nothing gets me as excited as something that’s funny and nerdy.

The next time I go to Chicago, I’ll probably visit some more museums. And I will definitely find another Mold-A-Rama machine and make something else. But I’m not sharing the next one!