One of the many duties and pleasures of a historian is to create timelines of things.  At Intel Corporation, a maker of microprocessors, or chips in Silicon Valley, we have produced timelines for computers, integrated circuits, key corporate innovations, personalities, products and sayings. 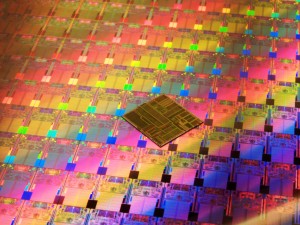 The most beautiful timeline the Intel Museum has published, in my opinion, is the timeline of Intel chips, microprocessors from 1971 to today.  Starting in 1971, the earliest microprocessor is an actual photo wherein the lines and functional areas resemble a city – the photomicrograph definitely looks like something from under a microscope – the real thing.  As time goes on, the functional areas become more and more delineated as the number of transistors grow with each generation.  The memory areas resemble irrigated fields and the functional areas resemble city blocks and parks.  As line widths (the electrical circuitry of a chip) shrink and keep shrinking, the microprocessors are photographed with colored lighting to pick up the patterns, and finally are colorized to capture the circuitry.

By 2006 the lines etched into the silicon chip are impossible to see with the naked eye at 65 nanometers.  By 2010, as interest in what chips “look like” becomes a feature in Intel advertising while lines on the chips themselves are only 32 nanometers wide.   Microprocessor images are now full color graphics, still accurately showing the chip layout of functional and storage areas and mapping out what they would look like under super magnification.

Lessons learned:  Visitors to the museum repeatedly pointed out to staff how fascinating the chip images are, and we realized we could combine museum visitors’ two favorite things in this timeline: beautiful and unusual visuals, and “did you know” information about each chip.

In addition, we sized it to be  folded and included as a freebie in the back of another brochure on how chips are made, and the folded size  (8.5 x 11”) makes it much more convenient for visitors to take individual posters with them. This poster remains the most popular souvenir of our company museum.

Jodelle French is the Corporate Historian for the Intel Corporation.