The Wright Lesson: How a Small Historical Society Took a Risk and Generated Local Recognition, Community, and Finan­cial Support

The Wright Lesson: How a Small Historical Society Took a Risk and Generated Local Recognition, Community, and Finan­cial Support 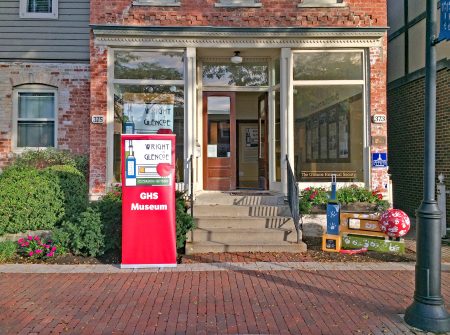 This article was orginally published in the Autumn 2016 issue of History News, the official magazine of AASLH. If you would like to get the magazine delivered quarterly, become a member of AASLH. Members can read the 12 most recent issues of History News on our Members Only page and see older issues on JSTOR.

What happens when you add “Existing Community History” to “New/Deeper Research” and a dose of “Calculated Risk?” You get something truly note­worthy. And that’s just what Glencoe Historical Society (GHS) has done.

As we all know, the new norm for most organizations in the history field are static or decreasing budgets with staff issues to match. Often the only increase has been in the challenges organizations face as they try to do more with less. The lack of funds is often a major barrier for smaller organizations that recognize the imperative to engage broader audiences, increase financial support, compete with flashier entertainment venues, and win the attention of city councils and boards. Yet, the empty (or nearly so) coffers don’t have to be the deciding factor for achiev­ing any or all of these objectives. Glencoe Historical Society’s scalable project is a great example of how this winning equa­tion can truly help organizations revital­ize, reengage, and even potentially return to the black financially.

The village of Glencoe, Illinois, is located about forty minutes north of Chicago. Nearly at the heart of this picturesque area along the north shore of Lake Michigan sits the all-volunteer organization that applied this formula in Wright in Glencoe. It was the 2016 winner of AASLH’s Leadership in History Albert B. Corey Award, which AASLH gives to volunteer-operated historical organi­zations that best display the qualities of vigor, scholarship, and imagination in their work. [1] 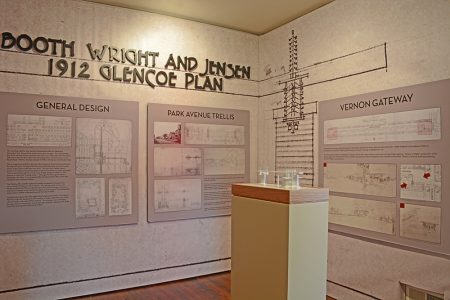 This ambitious venture—known as a “Special Project” in AASLH’s award parlance—combines multiple elements into one major project. It ultimately encompassed a groundbreaking exhibit, a major art project, special programming for adults and families, and a community celebration. Grand and unattainable as this project may seem on the surface, its success came to fruition using that same basic formula.

The historical society and its commu­nity has long had a superficial knowl­edge of its connection to Frank Lloyd Wright, specifically in the Ravine Bluffs Development, a fifteen-acre subdivision. What was known was found in the form of seven unique homes, some concrete sculptures, and a bridge. Over the years, Wright scholars made slight mention about this Glencoe gem, but did little to uncover more. Many felt all that could be said had been said. However, the impend­ing centennial of the subdivision brought about the idea to actively learn more of this notable connection and perhaps dis­cover a tidbit or two to add to what had already been compiled. This became the “Existing Community History” part of the equation, and the impetus for change. Their next challenge was exactly how to maximize the opportunity.

When organizations have missions to preserve and protect history as a focus, it can often become the sole effort when resources are at a minimum. In essence, goals can become hijacked by purpose. As the organization explained in its award nomination narrative, “[S]ince its found­ing in 1937, GHS focused largely on ‘identifying and preserving’ materials that came through our doors. Our volunteers had little time for original research.” [2] 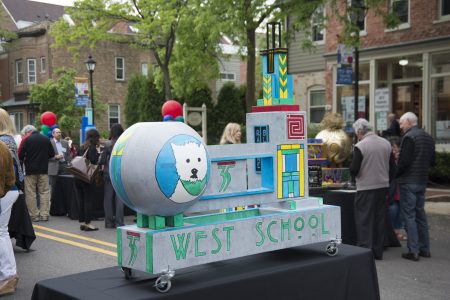 With the opportunity of the upcom­ing centennial, the society decided to go beyond dusting off its last festival’s program and to reallocate some scarce, valuable time toward researching the materials so carefully preserved in its collection. The institution also decided to commit time to reaching out to organi­zations that might have kindred research materials or items for loan. This effort led to the discovery of rare documentation of not only the homes, but also about the theretofore forgotten collaboration between Wright and noted landscape architect Jens Jensen, creator of the Prairie Style of landscape architecture, which was to be featured in the Ravine Bluffs Development. Researchers also uncovered more about the man responsi­ble for commissioning the development, Wright friend and attorney Sherman Booth Jr. This “New/Deeper Research” served as the catalyst for reengagement.

The project needed one more element to fully execute the equation. It was time to be bold in putting to productive use this newfound merging of “New/Deeper Research” with “Existing Community History.” Karen Ettelson, historical soci­ety vice president, explained, “GHS vol­unteers created a project budget (which doubled the annual GHS operating budget) [bold indeed!] and then stretched the talent of its membership even further by performing all fundraising, graphic design, web design, exhibition installation and [in-house] programming.”

The key to the “Calculated Risk” aspect of the equation was to set high goals and then actively mine the resources through both membership and the community. Glencoe just so happened to have both artists and Wright architecture enthusiasts well-connected to their community. The organization took stock of these talents, and put them to use. This level of effort was certainly not easy. It required every­one to stretch his or her abilities to their fullest to cover the resources that may not be already available: marketing expertise, website or flyer design, and program development and implementation. 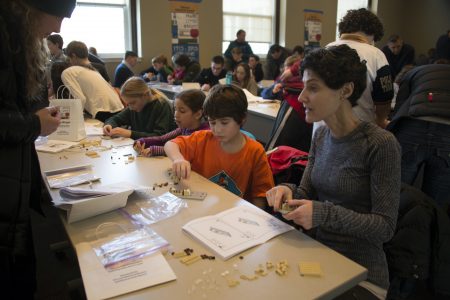 An exciting thing then happened. While in the process of filling needs in a crowdsourced manner, the histor­ical society exchanged their mantle of “expert” for that of “partner.” All too often, history organizations feel the need to be the sole contributor or expert in creating something history-like to push out to the public. However, it’s been proven time and again that engaging the talents of the individuals that make up your community is key in getting their eager and continuous support. As part of the project, these risk takers, a GHS committee comprising eleven of nineteen board members, raised enough money to not only cover the costs for the exhibition but also provided funds for all aspects of the programming and projects they developed—with a little to spare. Looking back, Ettelson admits that they are astounded at their accomplishment!

The result was an engaging 650-square-foot exhibition. It featured ele­ments of Wright, Jensen, and Booth’s original vision for a business district and a park named Glencoe Park; informa­tion on the Ravine Bluffs Development; and the history of each of the five main Wright-designed homes. (Booth’s tem­porary home called “The Cottage” and his final home make up the seven homes total.) The exhibit included blueprints, photographs, and a model of a trellis that was to serve as one of the community’s focal points but was never built.

Accompanying the exhibition was an impressive array of programs. At the top of the list was an exceptional, ambitious art-project-turned-fundraiser. Local artists and non-artists decorated sponsor-pur­chased, half-size fiberglass duplicates of the original fifteen Ravine Bluff commu­nity markers. Glencoe Historical Society featured these in a community-wide con­test and later auctioned them off. Some now sit at community sites while others are history-based keepsakes in private col­lections. A commissioned custom LEGO® kit of a Wright-designed private train station for the community (since demol­ished) was the focal point of a popular family educational event. The first guided housewalk in Glencoe in more than two decades, and an eclectic series of talks by architects, historians, and homeowners rounded out the programmatic offerings. The culmination of the project included a special centennial gala celebration featur­ing a performance by the jazz quartet of Wright enthusiast and Rock & Roll Hall of Famer Max Weinberg, drummer of Bruce Springsteen’s E Street Band.

To say this project was an amazing achievement is an understatement. But the best part is that this accomplishment serves as a model that any organization can follow in their own efforts to achieve local recognition, community and finan­cial support. 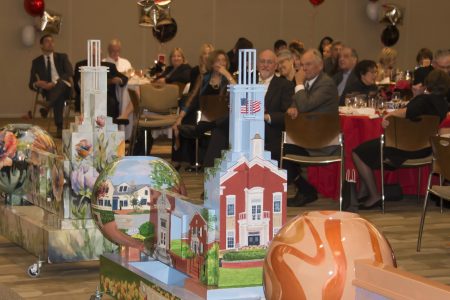 Not every historical society, archives, or museum will stumble across an undiscovered or rare item related to the likes of Frank Lloyd Wright, George Washington, or even Mickey Mouse. Not every community is equally endowed when it comes to resources. However, who’s to say that, digging a little deeper, you won’t uncover a fascinating missing piece of history quietly waiting in your collection, archives, or community? What might become the story that reinvigorates your organization to reaching its full potential and then some? Put this modest formula—Existing Community History + New/Deeper Research + Calculated Risk—to work in your own organization and see what happens. As the Leadership in History Awards nomination so aptly put it, “[We] learned from Wright in Glencoe that in order to find your history, you have to go look for it, and when you do, amazing things can happen.”

Want to learn more about the AASLH Awards and whether your organization has an award-worth project or exhibit? Click here.