To Do Rightly: Congregations as Incubators of American Activism

To Do Rightly: Congregations as Incubators of American Activism 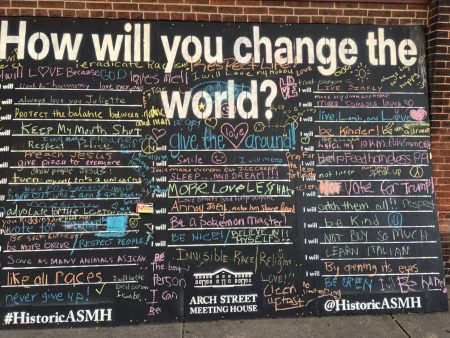 Last year, the Arch Street Friends Meeting House in Philadelphia erected a large chalkboard adjacent to its main entrance. Emblazoned on it was a headline: How will you change the world? Over a period of weeks, hundreds of passers-by offered their ideas on how to make the world better for themselves and their communities.

As those familiar with Quaker history will already know, Quaker beliefs, known as “testimonies,” and social activism are closely related—and have been since the seventeenth century. George Fox, the founder of the Society of Friends, declared in 1650 that Quakers should “Do rightly, justly, truly, holy, equally to all people in all things.” This powerful conviction has led Quakers to engage in a variety of social, economic, and political causes that far transcend the immediate needs of their co-religionists and extend deep into the community at large.

Quakers, for example, were leaders in what has been termed “the First Abolition,” the manumission of slaves starting in Delaware and Pennsylvania and spreading throughout the North prior to the Civil War. Quakers founded schools for African Americans, agitated for prison reform and women’s rights, resisted America’s entry into war, and provided international relief to refugees and victims of catastrophe. Today, the American Friends Service Committee (AFSC), founded in 1914 by members of Philadelphia’s Yearly Meeting, advocates for world peace, economic justice, and environmental protection, among other causes.

American congregations and religious organizations have long been part and parcel of what de Toqueville identified as a distinctly American urge to associational life. Integral to that urge have been a plethora of activist initiatives. Jewish congregations and religious groups, for example, in response to the tradition that Jews are “responsible one for the other,” have organized burial societies, relief for the poor, visitations to the sick and infirm, and assistance to widows and orphans, as documented in my recent book, Interpreting American Jewish History at Museums and Historic Sites, a volume in the AASLH series, Interpreting American History.

Jews have also been active on the national and international levels. In 1790, President Washington visited Newport, RI, where the Hebrew Congregation hailed the new government for “generously affording to all liberty of conscience and immunities of citizenship,” evoking Washington’s famous reply that the United States “gives to bigotry no sanction” and “to persecution no assistance.” In 1859, Jewish lay and clerical leaders organized the Board of Delegates of American Israelites, an organization devoted to the protection of Jewish civil and political rights in the U.S. and abroad. During the Civil War, the Board of Delegates was instrumental in securing the reversal of  an antisemitic order by General Grant expelling Jews from his military district. Shortly after America’s entry into World War I, Orthodox Jews led the way in founding what became the American Jewish Joint Distribution Committee, which today provides world-wide services to victims of war and natural catastrophes. 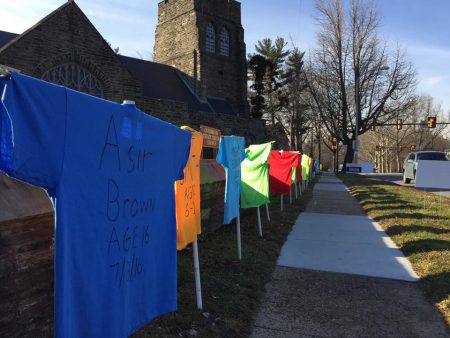 Photo by a member of the congregation. Courtesy of Overbrook Presbyterian Church.

In 2016, as part of a consortium of churches (Heed God’s Call), the Overbrook Presbyterian Church in Philadelphia mounted a memorial display of tee-shirts, emblazoned with the names of recent victims of gun violence.

Historically, social, economic, and political activism is a key feature of many American denominations and congregations. The Black Church has been a mainstay of the Civil Rights Movement for generations. Prior to the Civil War, for example, Mother Bethel African Methodist Episcopal Church—here in Philadelphia—agitated against slavery and functioned as a stop on the Underground Railway.

Like thousands of congregations across America, historic Old St. Joseph’s Roman Catholic Church provides care and support for the poor, the hungry, the sick, and other disadvantaged persons without regard to faith, race, gender, or age. And more than 400 American congregations have declared themselves sanctuaries for refugees and immigrants fearing deportation, among these the Philadelphia-based New Sanctuary Movement, a coalition of 19 churches and synagogues.

In a time when public discourse on a wide range of social, economic, and political issues is vexed and roiled, we as public history professionals have a responsibility to study, document, and present the rich roles of American congregations as incubators of social conscience, communal engagement, and civic activism. By interpreting historical and contemporary activism grounded in faith communities across our country, we can promote a more nuanced understanding of American history. And perhaps equally important, we can underscore the significance of individual agency—the idea that each and every one of us is an actor in history capable of making a difference in our lives and the life of our communities. As practitioners in a humanistic project, we can do no less.