Like a lot of you reading this post, I work for a small historical institution. Also like a lot of you, the “marketing” line item on our $225,000 yearly budget may as well not even be there – most of our money is allocated to educational programming and maintaining this 161-year-old house. You know – the core, mission-driven stuff we’re here to do.

Even though we can’t always allocate funds for marketing, we all know it’s important.

It’s about the Benjamins and the warm-and-fuzzies. I know I’m preaching to the choir when I say that competition for grant money is tight right now, and individuals are watching their pennies more closely due to the economy.  Marketing helps get people in the door, and it’s also your soap box for showing your community just how awesome your institution is. If we can’t show people we’re worthy of their hard-earned money, we can’t generate the revenue we need to keep our doors open. Plain and simple. 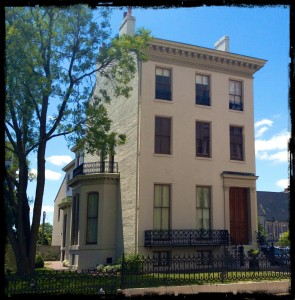 At Campbell House, we turned to — free! — social media to fill the budgetary gap for marketing. A few years ago we started a blog, got a Facebook page and became one of the first museums in St. Louis to have a Twitter account. (Not bad for a little house museum, eh?)

We’re small, and we’re competing for the same interests and pots of money the big boys in town are. But in terms of social media, that’s where size doesn’t matter. I would argue that our smallness has actually helped us. We have a staff of two and a half: the executive director, a part-time weekend manager who runs the place on the weekends, and yours truly. Our board has empowered us to make many decisions that in a larger institution would have to be cleared by twelve bureaucrats and three committees. If I want to do something – however crazy it usually is – I ask my ever-patient director and a nod from him is usually all I need.

Social media was something entirely new to staff and most of the board, so they trusted my judgment and cut me loose. My goal was to create a broad range of content for the blog that would appeal to a broad range of demographics to prove that Campbell House isn’t just a stagnant old house. I’ve used this platform to show that we are a dynamic institution with something to offer darn near anybody. And that’s not slick marketing talk, it’s the truth – and I’m sure if you look at your museum’s day-to-day operations, it’s true at your place, too. Our blog generates about 1500 hits a month, and a few of our more popular posts have been viewed thousands of times. (Really.) It’s nothing special – I’m just recording what we do, what interests us, and believe it or not, people like to see it. (Right now the blog is hosted by WordPress, and for a host of reasons, we would like to migrate that to our own website. That whole discussion warrants its own blog post, but I digress…)

Perhaps our biggest success has been with Twitter. If you’re not familiar with it, Twitter is microblogging. Hop on there and share what you think in 140-character increments. Because you are limited on space, it forces you to be an entertaining and succinct writer. You follow people who interest you, and if you’re interesting, people will follow you, too. Unlike Facebook, Twitter is a conversation. (About 30% of our tweets are “replies” to other people online.) You spend a lot of your time engaging and “talking” with other people on your timeline. We keep a casual tone that’s punctuated with humor and timely references whenever possible, which in many ways is a departure from museums in general. (Again, hooray for being small!) Although it’s free, you will invest a bit of time in this if you want it to be a success. For Campbell House, the time building these online relationships was well-spent. 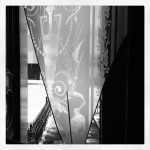 In August of 2011, we had garnered such a following on Twitter that we hosted our first “tweetup” (meetup for Twitter friends and followers), complete with food trucks, booze and tours of the house. We had over 100 people show up that night, and exactly none of them had ever been to our museum. Many of these same folks came to our rescue in the summer of 2012 when our museum was burglarized. Fortunately only about $100 in cash was stolen and the collection was left untouched, BUT the ne’er-do-well broke a 130-year-old piece of etched glass in one of our front doors, causing over $2,000 worth of damage.

After the initial shock of the burglary wore off, we mobilized our online supporters. We started with a single tweet. (Incidentally Schlafly is a local, well-loved brewery just a few blocks away from our house. Because they’re awesome, they offered to donate beer.) 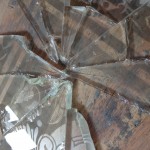 This initial tweet started the proliferation of the burglary news throughout the interwebs. Boss let me call the fundraising effort “Save our [GL]Ass™” (again, yay for being small!), and I did a blog post telling the story with a Paypal donation button. I sent the link to newsy folks and everyone else via Twitter and Facebook. Within just a few days, we had raised over $2,000, enough to pay for new glass and installation. Donations were promptly thanked with letters in the casual social-media-friendly style (think references to superheroes and “saving the day”), and we didn’t just take the money and run. No sir. We published updates on our blog, Facebook and Twitter to let people know how the glass replacement was going. (And it’s still in process, three months later.) And later tweets about “feeling the love”? – totally legit. We were shocked and blown away by the support – as much through the kind words and otherwise – we received from unexpected people.

We were the topic of a blog by one of St.   Louis’ social media marketing gurus: http://www.rizzotees.com/blog/can-a-tweet-in-a-time-of-peril-get-any-better

One of St. Louis’ most-beloved tumblr blogs immortalized us in 4-letter-word glory: http://whathighschoolshouldwecallme.tumblr.com/post/28980390544/to-the-people-who-broke-into-campbell-house-museum

A social Media maven over at award-winning ad firm Atomic Dust published a rant on her personal blog: http://daniellesotherblog.blogspot.com/2012/08/save-campbell-house-museums-glass.html 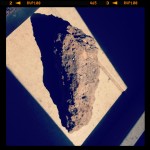 But more than the media attention and money, we had solid proof that social media works for fundraising. About 55 people donated to the Save our [GL]Ass™ fund, and only three of them were already members of the museum. These were new, first-time donors. Social media works for generating not only warm-and-fuzzy feelings about your organization, but it can help for raising a few bucks when you need a hand. But, as you can see, it does take some effort and you have to be genuine. (This my friends, is a whole ‘nother post entirely.)

Social media has been a successful time investment for Campbell House Museum. It has helped us raise a few dollars, but more importantly it has elevated us from just a house museum to THAT house museum in St. Louis. People can see that we have a personality that defies what one normally associates with a small museum. Social media has given us a platform to show the great work we do that would otherwise go unnoticed, and we can share the innovative partnerships, curriculum and technology we try to implement into our museum operations. Through Facebook, blogging and Twitter, we have somewhat leveled the playing field with larger institutions in St. Louis, especially with a younger demographic that can be hard to reach.

This week’s post is written by Shelley Satke Niemeier. As the Assistant Director of the Campbell House Museum in St. Louis, Shelley wears many hats including that of social media manager, lead grant writer,  special event planner and ghostbuster. After earning her Master’s Degree and *almost* her PhD in American Studies from Saint Louis University, it is her esteemed pleasure to tell the world about her favorite house museum in the best city on earth.