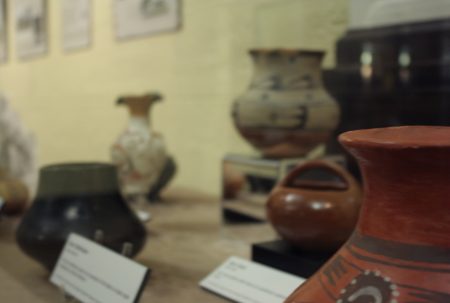 A portion of the Made for the Tourist Trade exhibition at the Greeley History Museum, open from January 18 – December 3, 2017.

By Nicole Famiglietti, Curator of Exhibits, City of Greeley Museums

Although there has been an increase in the size and scope of academic museums, many teaching collections are not displayed to the general public. Museums have an opportunity to grow academic-public engagement in their communities by partnering with colleges and universities. At the Greeley History Museum, we recently embraced these types of beneficial partnerships by teaming up with both the University of Northern Colorado and Aims Community College to display two separate engaging exhibitions. These two projects varied greatly in scope and content, but resulted in meaningful partnerships between our institutions.

The University of Northern Colorado’s Anthropology Department once had a dedicated museum. The collection was varied, but included pottery collected by southwestern archaeologist Edgar Lee Hewett (1865-1946). These artifacts made up a central display in their Anthropology Museum until it unexpectedly and mysteriously closed in 1983, and the collection was dispersed.

In 2015, over 300 artifacts were returned to the university. Our Exhibits Department was contacted for advice on best practices regarding storage and display. In addition to the display at the university library, it was decided that an exhibition at the Greeley History Museum would be appropriate and well-received. Museum staff alongside three Anthropology students created Made for the Tourist Trade, which explores how the expansion of railroads into the American West created tourist demand for Native American art. Over the course of a semester, these dedicated students learned object handling and display guidelines, and conducted extensive research including an exclusive interview with a former university staff member. This oral history was added to the museum’s collection. University professors also utilized the exhibition as a teaching opportunity, sending students to the museum and writing class reports.

This year also marks the 50th anniversary of Aims Community College, the first community college in Northern Colorado. The school created an anniversary exhibit with memorabilia and photographs highlighting the last half-century, and asked us to host a traveling portion. After the exhibit closed at the college, a portion moved to the Greeley History Museum. The museum display also included artifacts from our collection. This exhibit did not involve the intensive original research that was required for Made for the Tourist Trade and interns were not specifically assigned to create this display. However, we had an excellent opportunity to strengthen ties with the community college and highlight their history in our community. Which is, after all, what local history museums should do! 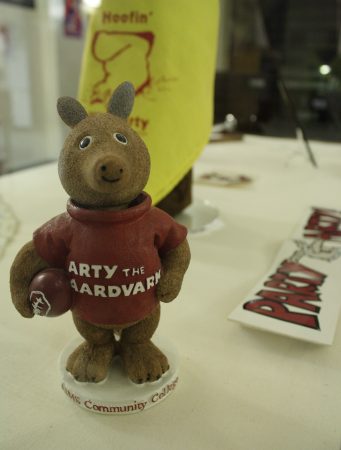 Arty the Aardvark is the mascot of Aims Community College. The exhibit contains fun Arty memorabilia including trading cards and game schedules created during a media campaign for a nonexistent and “undefeated” Howling Aardvarks football team. The exhibit is open at the Greeley History Museum from May 17 – July 23, 2017.

The two different experiences working with local colleges allowed for new opportunities and partnerships for all of us. The Greeley History Museum offered two interesting temporary exhibitions with artifacts rarely seen by the non-collegiate public, and the schools had an opportunity to showcase their collections and provide students in-depth training opportunities. Many museums have local colleges or universities that we hope to maintain good ties with, but that rarely extends past the occasional student internship. Producing collaborative exhibitions or hosting traveling ones are both excellent opportunities to open doors for mutually-rewarding partnerships.