In March I wrote a blog post asking whether lecture series are endangered. I received some great feedback in the comments section, and I took the suggestions to heart.

Here’s what folks had to say: 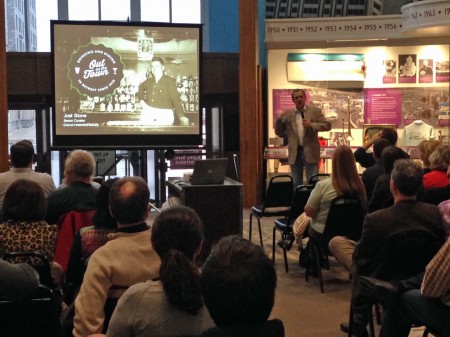 Bob Beatty said: “One success I had with these events was to pair them with an outside group… We also included them as part of evening events, so that folks could enjoy a bit of nosh ahead of time.”

And Chick History wrote, “We say it all the time, but sometimes have a hard time putting it into practice…but the sexy and fun topics are what generates the most interest.”

We incorporated both these concepts into our event, and POW! Success! We had more than 100 people attend last night. So, what did we do?

Second, we just opened a new temporary exhibit called Out on the Town: Drinking and Dining in Detroit Since 1920. In the exhibit, we show the change in Detroit’s bar and restaurant culture from Prohibition era speakeasies to workingman’s neighborhood bars to jazz and night clubs to the “Mad Men” era’s three-martini business lunches. Needless to say, it’s a “sexy” and “fun” topic.

So, we connected with the Detroit Drunken Historical Society and together planned an event here at the museum. Our Senior Curator Joel Stone would provide a lecture on the history of drinking in Detroit. Group members were encouraged to bring their own booze and snacks, and to provide a $5 donation to the museum.

When the event went up on the Drunken Historical Society’s Meetup page, RSVPs reached its capacity of 150 people within 5 hours. They even created a waiting list for another 50 people! And despite a rainy evening, more than 100 showed up with beer and wine, homemade cookies, candy, potato chips, and so on. Joel began his presentation by stating, “I do about 100 of these lectures a year, and I’ve always wanted to do this!” He pulled a bottle of beer out from behind the lectern, popped off the cap and took a swig in front of the group. Laughter, applause and merriment ensued.

After Joel’s talk, the group was invited to see the exhibit and socialize. People had a blast, and finally the event organizer was forced to say, with a snide grin, “Ok folks, you don’t have to go home, but you can’t stay here!”

So, in conclusion, thank you dear blog readers for your great suggestions. I heard more than one person last night say, “When can we do this again?” We are already brainstorming ideas.