Using Jazz Improvisation As A Model For Developing Exhibits

Using Jazz Improvisation As A Model For Developing Exhibits

Jazz improvisation begins with a melodic phrase, then it invites a response and builds on a theme. Sometimes pleasing, sometimes cacophonous, the result is rooted in the magic of call and response. Think of it as history in action.

In 2012, the Museum of International Folk Art, in Santa Fe, New Mexico took a similar approach when we developed exhibits in our newly created Gallery of Conscience. Improvisation is entirely appropriate here, fitting both the mission and the method of the Gallery. We use the words and works of living traditional artists to convey lessons, share stories, generate dialogue, and promote personal action on issues of conscience. We’ve used the Gallery’s design and incorporated participatory processes to attract new audiences, while addressing the changing needs of today’s folk artists.

Visitor responses often help us decide how to change the exhibit space. Throughout the Gallery, there are places for them to explore all aspects of the issue’s history, write down their thoughts, talk with either the artists or each other, and brainstorm different avenues of action.

Like a jazz song, we begin with a single idea, then we use a few artifacts effectively to explore the “melody,” so to speak. Last year, we showed how folk artists use their art to educate, advocate and increase awareness about HIV/AIDS both on a local and on an international scale. On World AIDS Day, over a dozen works of art began the conversation. They included:

Improvisation can bring out many emotions; in this case, it captured and conveyed grief, resilience, activism and hope. People of all ages across the community responded to the call, adding miniature protest signs, memorials to loved ones, radio pieces about their own life stories, and squares later sewn into a community quilt. The exhibit had provided the community with an opportunity to discuss a subject too often hidden by silence, stigma, and misinformation. The result is sometimes beautiful, sometimes challenging, but always rooted in the community; its need to feel becomes a desire to act. 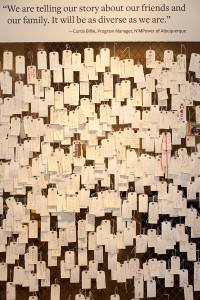 For a project to be successful and embraced, we knew the audience needed to gain a sense of ownership through active involvement, not passive lectures. Everyone has something to offer. If we wanted to tap that collaborative vein, we had to clean our own house by shaking up the traditional museum decision-making structure. This required a flexible and collaborative approach. You know, improvisation, just like a group of jazz musicians. Three staff members, an exhibits development consultant, a community engagement coordinator, and a team manager use input from visitors, artists and the community to begin the process.

The result has been both exhilarating and exasperating. For example, our definitions of “success,” “community involvement,” and “art,” constantly evolve. So do our assumptions about workplace responsibility and lines of authority….and that’s not a bad thing. We’re not just creating polished exhibits, we’re starting conversations. Patrons expect finished products, so we have to explain that our revolutionary approach is a work-in-progress of unprecedented, yet demonstrable, value. While we may not always please old patrons, we are reaching new audiences.

Sure, staff members were initially skeptical of this model, but we’re all beginning to see the potential of this kind of “crowd-sourcing” approach. It not only brings burning world issues to the doorstep of a community, it also acknowledges new ways to learn and effect widespread and meaningful social change.

Responses from everyone reinforce our enthusiasm:

Museums and communities can work together to create an entirely new model for civic engagement, a model that community-based artists and storytellers have known all along. In the words of South African master bead worker, Lulama Sihlabeni, “Folk art must speak to people—that is part of what puts the ‘folk’ in folk arts!”

You can hear more about the Gallery of Conscience’s innovative model for community-based exhibit development on AASLH’s Online Conference, under a session called “Working with Community to Address Things that Matter Locally.” Friday,  September 20th, 2:15-3:30, CDT.

A Senior Lecturer in Anthropology at the University of Texas at Austin, Suzanne Seriff is an award-winning innovator in the public sector art world with over 25 years experience transforming museums and public spaces into platforms for community engagement. She is currently Director of the Gallery of Conscience at Santa Fe’s Museum of International Folk Art.