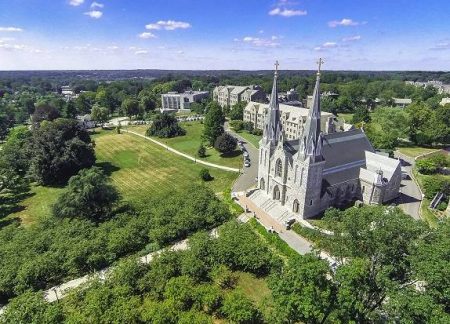 Villanova University has officially opened the Albert Lepage Center for History in the Public Interest, a new center that will bring historical scholarship and perspective to bear on contemporary global affairs and that will serve as a leading voice for greater historical consciousness among citizens, elected officials and industry leaders.

The Center will be a multifaceted resource for students, teachers, industry and elected officials that will draw upon the past to impart lessons for the modern world. The Center is made possible through the generosity of Albert Lepage ’69 CLAS, retired co-chairman of Lepage Bakeries Inc.  A history major at Villanova, Mr. Lepage made a $10 million commitment for support of History to the College of Liberal Arts and Sciences in 2016. It was the largest gift ever made to the College of Liberal Arts and Sciences.

Opened in January, the Center is led by a full-time administrative director and a faculty director, appointed to a three-year term. Noted public historian Jason Steinhauer has been appointed the full-time director. Dr. Paul Steege, Associate Professor, History, Villanova University College of Liberal Arts and Sciences will serve as the inaugural faculty director.

Jason Steinhauer is a recognized leader within the field of public history and history communication. Selected after a national search, Steinhauer has more than 15 years of experience in museums, archives, government and academia at institutions such as the Library of Congress, New-York Historical Society, the Museum of Jewish Heritage and the Rock ‘n’ Roll Hall of Fame. He is also the creator of a new field of study, History Communication, and his writings about history have been published in professional publications and national media outlets. Steinhauer was most recently at The John W. Kluge Center at the Library of Congress, where he managed strategic communications and public programs. Prior to the Kluge Center, he worked at the Library of Congress Veterans History Project, building a nationwide network of volunteers to collect, preserve, and make accessible personal accounts of American war veterans so that future generations may hear directly from veterans and better understand the realities of war.

Dr. Paul Steege joined the Villanova History Department in 2000 and earned his PhD from the University of Chicago. A specialist in twentieth-century German history, he is the author of Black Market, Cold War: Everyday Life in Berlin, 1946-1949 (Cambridge University Press, 2007). Dr. Steege serves on the advisory board of the discussion network H-German, which he edited for seven years, and he regularly comments on modern European History in a variety of media formats. During the spring 2016 semester he was awarded a U.S. Fulbright Association Senior Scholar Research Grant to support research in Berlin on his current book project, Everyday Life, Everyday Violence: Berlin and the Twentieth Century.

Through academic programs, research, publications and events, the Lepage Center will engage the public, policymakers, scholars, teachers and students from history and other fields. Proposed initiatives include summer institutes for teachers, briefings for government officials, events for the public and conferences for scholars. The Center will also seek to utilize digital tools and new media to engage people in history in ways that matter to their lives.

“We are so fortunate in having both Dr. Steege and Jason Steinhauer to lead this much-anticipated new Center of Excellence in our College,” said Adele Lindenmeyr, PhD, Dean, Villanova University College of Liberal Arts and Sciences. “Dr. Steege is a highly-respected historian whose research has earned him well-deserved recognition, while Mr. Steinhauer is an innovative professional and a passionate advocate for history and scholarship with demonstrated success in creatively and engagingly sharing it with the public. With our leaders now in place, the Lepage Center for History in the Public Interest is set to begin making a tangible impact on the way the public engages with history.”