Votes for Women, Y’all: Celebrating the Women’s Suffrage Centennial in Arkansas and Beyond

Votes for Women, Y’all: Celebrating the Women’s Suffrage Centennial in Arkansas and Beyond 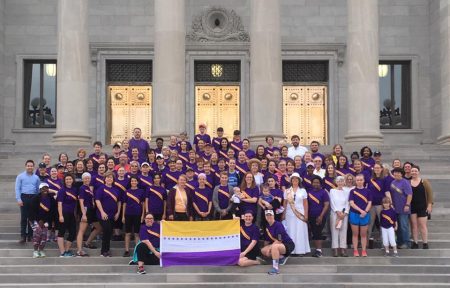 Inaugural Suffrage Sprint & Stroll on the steps of the State Capitol in Little Rock, August 26, 2017.

If you actively support the study of women’s history, you’re more than likely aware of the upcoming centennial of the 19th Amendment on August 26, 2020. You may be, as I am, involved with planning exhibits and events to recognize the work of suffragists in your state and sharing your findings with partner organizations coordinating the national celebration.

In Arkansas, we began planning several years ago to celebrate the unique place our state holds in the history of the women’s suffrage movement. In early 1917, Arkansas became the first non-suffrage state in the union to allow women to vote in primary elections. Arkansas was the 12th state to ratify the 19th Amendment, making it the first Southern state to do so. 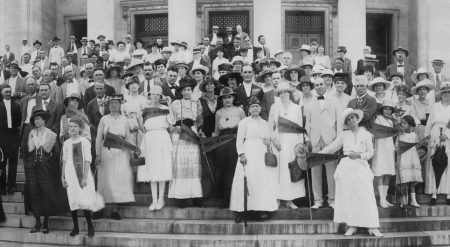 Women’s Suffrage Delegation on the steps of the State Capitol with Governor Charles Brough, 1917. Courtesy of the Arkansas State Archives.

In the fall of 2015, I invited representatives from archives and historic sites to meet to discuss partnering on a project to promote the history of the women’s suffrage movement in Arkansas. After several meetings in early 2016, we partnered with the Arkansas Women’s History Institute (AWHI) to form the Arkansas Women’s Suffrage Centennial Project (AWSCP). I joined the AWHI board in January 2016 and serve as their representative to the AWSCP. We decided to focus our early efforts on the upcoming anniversary of primary suffrage and the creation of a virtual exhibit.

In the spring of 2016, AWHI received a planning grant from the Arkansas Humanities Council to fund research on the women’s suffrage movement in Arkansas. Two public history graduate students conducted research that summer and fall. The decision was made that the UALR Center for Arkansas History and Culture (CAHC), one of the AWSCP partner institutions, would apply for a major grant in September to create a virtual exhibit. As an all-volunteer organizations, AWHI didn’t have the infrastructure to serve as the fiscal agent.

On February 7, 2017, an event was held on the steps of the Arkansas State Capitol to celebrate the centennial anniversary of the state primary suffrage bill. In addition to remarks and a citation from state representatives, Governor Hutchinson declared it “Women’s Primary Suffrage Day.” The on-line exhibit about the women’s suffrage movement in Arkansas launched that day, as well. It features a timeline and biographies of prominent suffragists in Arkansas.

Following the event, I successfully lobbied the Governor’s office to create a Women’s Suffrage Centennial Commemoration Committee. He issued an executive order on August 25, 2017 and allowed me to present it the following day. August 26 is celebrated nationally as Women’s Equality Day because it is the anniversary of the 19th Amendment being added to the U.S. Constitution. AWHI held its inaugural Suffrage Sprint & Stroll, a 1.9 mile fun run and walk, on August 26 this year. 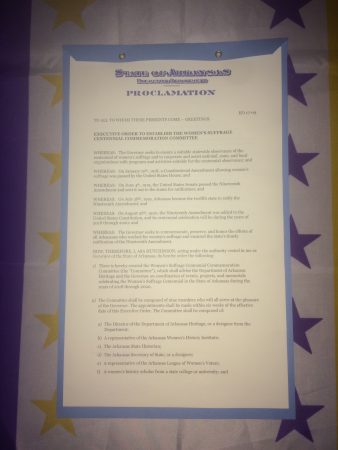 Unlike Arkansas, the majority of Southern states initially rejected the 19th Amendment. Georgia was the first state to do so and didn’t ratify it for more than fifty years. As a native Georgian, I’m embarrassed to admit I didn’t know this until recently. To combat my ignorance, I’ve easily located a number of web-based resources related to the women’s suffrage movement in Georgia. A good overview can be found at the New Georgia Encyclopedia site.

I haven’t, however, been able to identify any archives, museums, colleges/universities, or civic organizations in the South with public plans to celebrate the centennial of women’s suffrage. This isn’t just important to me because of my personal connection to Georgia. As a member of the Women’s Vote Centennial Initiative (WVCI) state outreach committee, I volunteered to recruit state liaisons for Alabama, Georgia, Florida, Louisiana, and Mississippi. I haven’t been successful in finding any one for those states yet, but I’m not done trying. In the words of Susan B. Anthony, “Failure is impossible.”

While it may be more challenging to rally support for these endeavors, it’s important to share the history of the women’s suffrage movement in states that didn’t ratify the 19th Amendment until after it was added to the Constitution in 1920. Women and men fought for women’s voting rights in every state and their work should be remembered. Spearheading a suffrage commemoration campaign at the state level is not as difficult as you might imagine. With creative partnerships and dedicated volunteers, many of our goals in Arkansas were accomplished with little or no outside funding. The Suffrage Sprint & Stroll raised money for AWHI in spite of having no sponsors.

Let this be a rallying cry for my fellow women’s suffrage supporters. There’s still time for your state to be a part of the centennial celebration in 2020. You can find more information at the National Woman’s Party Vote Centennial Initiative site. If you want to know more about what we’ve done in Arkansas, including how to succeed as a first-time race director, I can be reached at [email protected].