We Are All the Spinning Wheel

We Are All the Spinning Wheel 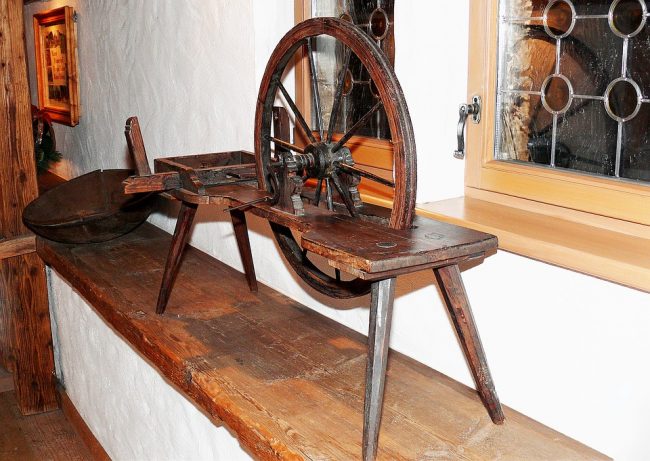 Throughout the course of my visits to museums, historic houses, and historic sites around New England, I found one specific object repeatedly piquing my curiosity more often than any other. Usually maligned and rarely celebrated, it seems that both history and fate have branded this object not only ubiquitous, but also useless and irrelevant; and as such blameworthy for the plight facing the twenty-first-century museum as it strives to keep pace with rapidly changing trends, learning theories, and demographics that characterize our society today. While I wholeheartedly agree that this object may indeed be ubiquitous in museums, and to some degree, useless by today’s standards, it is by no means irrelevant. I’d like to make a case for the defense of what has apparently, through no fault of its own, become one of history’s most disparaged offenders in the world of museology: the spinning wheel.

For most of us, thoughts of the spinning wheel often conjure up visions of a pricked finger in a fairy tale, or a Betsy Ross-type figure spinning wool beside a hearth… and a butter churn… and a bed warmer…  But what many of us may not know is that the spinning wheel has over one thousand years of global history. Its replacement of the drop spindle led to a one-hundred-fold increase in the speed at which fiber could be spun. In Europe, this led to an increased availability of linen rags, which removed the bottleneck caused by the high demand for then-recently introduced paper. This provided Gutenberg with the ability to introduce printing, which led to widespread education, and the rest is, as the saying goes, “history.” 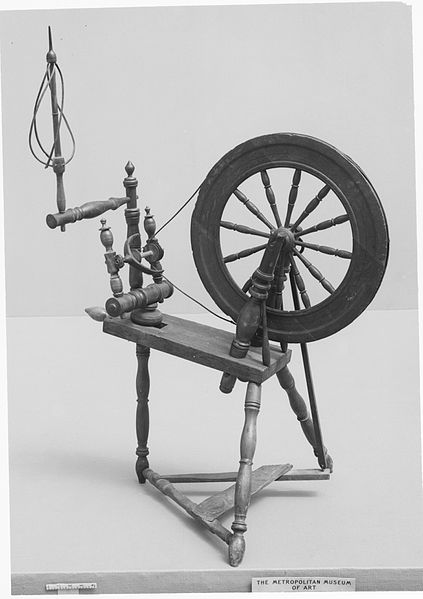 Eventually, the spinning wheel became obsolete with the advent of the mass textile manufacturing ushered in by the Industrial Revolution, which ultimately provided the widespread commercial availability of cloth that we know and enjoy today. One might argue that without the evolution of technology brought about by the spinning wheel, we might all be laboring at a hearth… next to a butter churn… and a bed warmer… making our own clothes on a drop spindle. While considered by many to be dull and prosaic, the ubiquity of the spinning wheel has led to its inclusion in the art, literature, and other expressions of cultures around the world. Thus, it might be theorized that the spinning wheel may actually be heralded as one of the few objects that continue to be collectively and globally relevant to all of us.

Seen in this light, we might view the denigrated spinning wheel as a metaphor for museums in the twenty-first century as agents for building a stronger and more empathetic global community, where mere curiosity is heightened to a yearning for real understanding, and information serves not only to relate facts, but also to foster a sense of relevance and optimism. When we, as museologists, engage one another and the public at large as fellow human beings, we must take the time in our harried worlds to look deeper beneath the surface, reflect, contemplate, question, and perhaps most importantly, feel. Only by doing so will we come to the realization that each and every one of us, like the spinning wheel, has an inherent sense of importance. And be mindful that each of our thoughts, our words, our deeds, our actions, has purpose… and consequences. Each of us has a unique story to tell, and with it, something worthwhile and relevant to offer.

I am confident that museums will continue on their trajectory to becoming more welcoming centers for inquiry, learning, and understanding. But what are museums other than institutions governed, curated, and visited by people? People like me and you, who together can rise above the din of the status quo by refusing to see, accept, and judge things at their face value. So if history teaches us anything, instead of feeling sympathy for the spinning wheel, I say we celebrate it. And by seeing the attributes of the spinning wheel in each and every one of us, spread this celebratory joy as we pursue the endeavors, trials, and tribulations on our individual and collective life journeys.