What I’m Looking For in a Museum Visit…

What I’m Looking For in a Museum Visit…

If I were to ask my nearly four-year-old son what would make for an ideal museum visit, he’d probably say something like “ice cream” or “fireworks” before “age-appropriate interaction with staff”—but I know better! I ask questions very carefully at his age, and I look for cues. While I was certain that visits to museums, zoos, and aquariums had inspired and entertained him, he had never talked about what he remembered learning from other people at these institutions (meaning not mom and dad) until a few weeks ago.

On a recent visit to the Aquarium of the Pacific in Long Beach, CA (we’re members), my son was drawn to a large screen featuring a bunch of wiggly “stuff” moving all around. An educator standing nearby saw him take interest and explained that it was a magnification of a sample of water taken that morning from right outside the Aquarium. He quickly pointed to the largest squiggly blob and asked, “What is that?” She told him it was a sea flea surrounded by a lot of other plankton and pulled out a card that showed us what it looked like. He was pretty excited by this because he has a book about ocean animals and had seen a picture of a sea flea before. He made the connection and verbalized it energetically to all of us. Then he proceeded to dance like the sea flea on the screen and ran off to look at something else (typical!). I thanked the educator. She had done a great job of reading our family. She knew exactly how to talk to my son—not down to him—but to engage him just enough to help him understand what he was seeing and to then give him the freedom to do what he wanted with this information. The interaction was all of two minutes long—but a good three or four days later, he started talking to me about it in the car. “Mama! Remember when we saw the sea flea dancing?” “Yes,” I replied. “Do you remember where he came from?” “The water by the Aquarium,” he said, “it’s full of plankton!” Wow—he remembered! 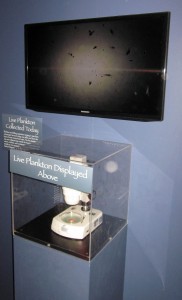 Talk about keeping current! The Aquarium of the Pacific takes samples of water from outside the facility every day to show visitors of all ages what’s out there.

I started thinking about how many times I had heard seasoned museum staffers at more than one institution wonder if the Pre-K audience really “got anything” out of a museum visit. I can remember people questioning the value of creating programs for this audience because the thought was there would be little to no return on investment. When it comes to the Pre-K crowd and their families, my take on it has been that I want them to (1) feel welcome and comfortable, (2) have a good time, (3) enjoy meaningful and age-appropriate interaction with staff and/or exhibits that will enable them to make a connection or learn something new, and (4) see them as a repeat visitor and/or advocate for our organization.

I don’t have a background in early childhood development (which would have come in really handy as a parent!), and neither do a majority of staff at small-to-mid-sized museums. I have struggled to learn how to talk to this audience and to understand how their little minds work. I have learned a lot from volunteers with backgrounds in teaching young children, teachers, and day care providers. These folks are a great resource for institutions of all sizes. Many helpful things can be found online, too. Nicholas Day wrote a fascinating article about new findings on children and memory for Slate last year. He emphasized the importance of conversational style and narrative, and how they reinforce connections. As young children learn how to organize memories in a narrative, they learn the genre of memory, and their memories become more organized. He shared findings from psychologists who argue that more organized memories are better retained over time. One example of early retention he shared came from the Maori in New Zealand. They “…have the earliest average first memory of any culture—2½ years of age—and talk to their children in a highly elaborative way about their shared past. I’d thought of memory as essentially neural. But at a certain point, it may be as much cultural.” 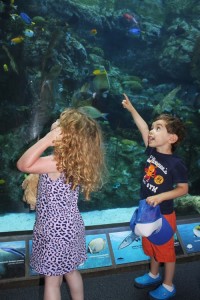 All of this is great food for thought when it comes to thinking about how to work with this often underserved museum audience. Maybe you have some great stories to share about learning how to develop, execute, and evaluate programs for Pre-K children? Please share!

I’ll end by telling you that last weekend we treated one of my son’s best pals to a day at the Aquarium. Guess where he took her first? There was no stationed interpreter this time. My son took care of that.