When Things Aren’t in the Plan

When Things Aren’t in the Plan

Long before I got into museum work, I was a big fan of plans.  Life plans, weekend plans, whatever—I was always the person who got everyone organized and on task.  But when someone asked me recently “Does your museum have a strategic plan?” I said no, without any apologies or guilt.  I still believe in planning, but right now, a strategic plan for my organization doesn’t feel right. 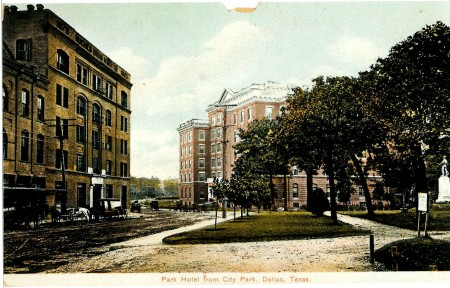 A historic look at two of the buildings adjacent to Dallas Heritage Village. Both have changed hands in the last six months, and plans are underway to restore and redevelop.

In 2008, Dallas Heritage Village completed a strategic plan, designed to take us through the next 5 years, including a major capital expansion.  Then the recession hit and suddenly half of that plan was null and void.  In 2010, we updated that plan, focusing on interpretation updates.  In late 2012, we began working on a leadership transition.  In Fall 2013, I headed off to SHA as Interim Executive Director.  We had just completed a board strategic planning retreat, so the opportunity to spend three weeks thinking about the big picture was perfect timing.

When I returned to DHV, I was ready to tackle some major strategic planning.  After being named Executive Director in March, we hosted another board strategic planning retreat, now focusing on a vision I had largely developed during SHA.  And then, everything around us began to change, faster than I ever imagined possible.

Dallas Heritage Village sits on land that was our very first city park.  A diverse neighborhood, called the Cedars, grew up around City Park.  It always had a mix of upper class homes, working class homes, and industry.  As with many urban neighborhoods in the 1960s, highway construction cut off the neighborhood from the rest of downtown.; the neighborhood was effectively abandoned.  In 1969, we opened to the public; since then, we have largely been an island.  No one accidentally drives by DHV and decides to come in.  About 15 years ago, artists started moving into the neighborhood and began building a community.  Redevelopment began a several blocks away, but there was no easy connector between that redevelopment and DHV.

Last spring, Vogel Alcove, a non-profit that provides childcare for young homeless children, moved in across the street.  We were absolutely thrilled to have just one great neighbor, and today, we’re working together in large and small ways.

This past summer, various redevelopment rumors began about multiple historic properties on Ervay Street, one of our boundaries, and those rumors are turning into reality.  A long-term tenant of ours, Yellow Cab, gave six months notice that they were moving out.  We put the property on the market and found ourselves in a bidding war.

In one year, the market value of that property increased 50%–which gave a welcome boost to our endowment.  The new owner plans to renovate the building and provide small business office space.  A large historic hotel (that hasn’t been a hotel in over 20 years), immediately adjacent to the museum, went under contract.  A local family foundation purchased a historic building two blocks from DHV to create an artists’ incubator, providing work space, entrepreneurial classes, a job bank and more.  A historic factory building was purchased, with plans to turn it into mixed-use residential.  A historic Ford dealership is being purchased by a contemporary art museum and theater that is relocating to the Cedars.  Suddenly, we have multiple neighbors, all of whom want to work together to transform this corner of Dallas.

Three months ago, none of this was on our radar.  We are meeting regularly with these new stakeholders, and I know a plan will emerge.  But right now, our landscape is moving too fast to even attempt a formal plan.  As a smaller organization, I’m grateful that we can be flexible, meet these opportunities as they come, and not have to scrap another strategic plan.  For now, we’re focusing on our vision: “Dallas Heritage Village is a place to make history in the heart of the Cedars neighborhood.”

A plan will come, but not without our new partners and neighbors.  Planning is still very important, but I now believe that a strategic vision is the key to a successful, relevant museum.  We know where we’re going, but the path is still changing.  And it’s very exciting!