Join the Women’s History Affinity Group on Friday, September 16, 2016 from 1:30 to 5:30 PM. as they visit Dr. Bertha Van Hoosen’s House at Rochester Hills Museum and Farm and learn more about her and other trailblazing women. This site visit is a companion to the Affinity Group’s Friday morning roundtable, “More Than Just Friends? The Do’s and Don’ts of Interpreting Female Friendship.” PLEASE NOTE: This tour is ticketed. It costs $45. Tickets can be purchased Wednesday through Friday from the registration counter at the Annual Meeting.

…She was short in stature but carried herself with easy grace and a dignity which made her seem in full possession of the many difficulties that presented themselves. She had the spirited manner that so many times accompanies the bright red hair that had once caused her to be referred to as the “red headed dynamo. This was softened by a great sense of humor and fair play. Looking back, she evaluated herself as a countrybred, ignorant youth but willing. She had freedom to succeed or fail; she had however, learned how to face realities without suffering defeat.”

In April, 2015, the American Medical Women’s Association celebrated their 100 year anniversary and honored their founder, Dr. Bertha Van Hoosen, by beginning their annual conference at the Rochester Hills Museum at Van Hoosen Farm in Rochester Hills, Michigan. Dr. Van Hoosen was born in 1863 on land that was first settled by her great grandparents in 1823 and died at her family home in 1952. 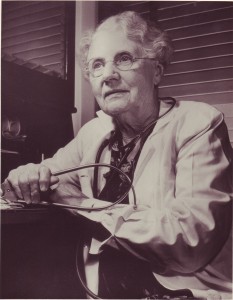 At the time of her death, Van Hoosen was one of the most well known and longest practicing physicians and surgeons in the world – and the inspiration to future generations of surgical daughters.

Born at the height of the Civil War, Van Hoosen recalled her childhood with gratitude saying that her education began in her backyard kindergarten and her hundred acre playground where procreation, birth and death were a natural part of everyday life on the farm. Her formal education started in the Stony Creek rural school where she was “like a lump of unworked clay in the hands of a potter”. In her 1947 autobiography Petticoat Surgeon she wrote, “Twenty years passed before that mass was finally shaped into the form of a woman doctor.” 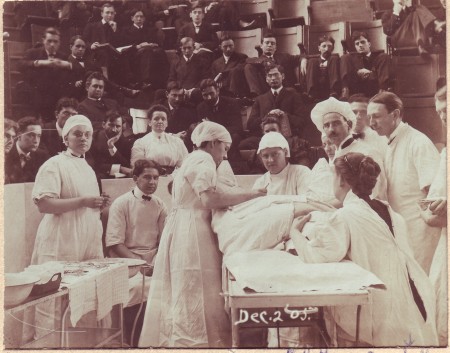 Van Hoosen and her sister, Alice, were among the first generation of young women to attend the University of Michigan. Bertha chose medicine as she wanted to be independent and able to earn her own money, loved the challenge of being a life-long learner, and wanted to be an ”indispensable” citizen in her community. However her parents, although progressive, were not supportive of her plans to become a doctor so Bertha had to work to pay for medical school while facing the challenges of discrimination for being a woman in the field of medicine. She was often called a “hen-medic” and much of Van Hoosen’s curriculum at medical school was self-created due to the restrictions and refusal by male physicians to take on women medical students. Her early professional experiences included time spent at the Women’s Hospital in Detroit, Kalamazoo State Hospital, and New England Hospital for Women and Children in Boston. 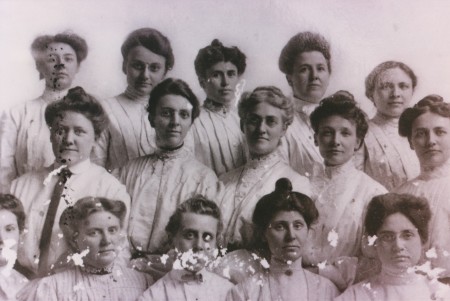 Bertha Van Hoosen with her graduating class from the University of Michigan, 1888.

In 1892, Van Hoosen chose Chicago as the city in which she would establish her practice. Her first position was as an emergency physician at the Columbian Exposition of 1893, where she received press coverage and earned $10.00 per day.

During her eighty nine years, Dr. Bertha Van Hoosen’s professional accomplishments were remarkable. Some highlights of her career include:

• Attending gynecologist at both Chicago’s Provident Hospital and Women’s Hospital
• Professor of Clinical Gynecology at University of Illinois Medical School
• Mayo Clinic – she visited every three months to “learn from the masters”
• 1909 – the first and only woman to read a paper at the XVI International Congress of Medicine in Budapest, Hungary
• 1911 – elected to University of Michigan’s Hall of Fame
• Mary Thompson Hospital – attending physician
• 1913 – First woman doctor appointed under civil service to Cook County Hospital
• Experimented with scopolamine-morphine anesthesia also called “twilight sleep” and published a book on the subject
• Perfected the “buttonhole appendectomy” surgical technique
• 1915 – Founded the American Medical Women’s Association and was also the first president
• 1918 – Loyola University Medical School – first woman to head a medical division at a co-ed university as professor and head of obstetrics
• 1928 – U.S. Department of Labor Women’s Bureau – chosen as a representative of the highest achievement by a woman in her field
• 1930 – Organized a Mother’s Milk Bureau and, for many years, gave lectures on sex education in Chicago schools and institutions
• 1947 – Received national recognition for her autobiography, Petticoat Surgeon.
• 1947 – Honorary Member of the International Association of Medical Women following Madame Marie Curie as the second person to receive this honor

Dr. Bertha Van Hoosen’s legacy continues to inspire today’s “surgical daughters” who are members of the American Medical Women’s Association and who carry out her vision of scholarship and opportunities for women in medicine. Learn more about her life, and those of other female trailblazers at the AASLH Annual Meeting by attending the Women’s History Affinity group panel and site visit on Friday, September 16, 2016, and by visiting the Rochester Hills Museum at Van Hoosen Farm website.

PLEASE NOTE: This tour is ticketed. It costs $45. Tickets can be purchased Wednesday through Friday from the registration counter at the Annual Meeting.