The American Association for State and Local History (AASLH) will present its 2016 annual meeting in Detroit, MI, from September 14-17, in partnership with the Michigan Museums Association. Deadline for submissions is December 7.

AASLH is now accepting proposals for sessions and workshops.

Detroit’s story is one of persistence and evolution. In the 1700s, it was a strategic outpost, bringing 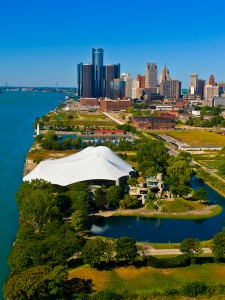 together Native American traders and European explorers. In 1805, its first settlement was destroyed by fire, only to be rebuilt stronger than before—its resurgence celebrated in the contemporary landmark, The Spirit of Detroit. Before the Civil War, Detroit served as a terminus on the Underground Railroad, until the Fugitive Slave Act of 1850 transformed it into an international gateway to freedom. In the twentieth century, hundreds of thousands of Americans flocked to the region as part of the Great Migration, and to participate in its industrial expansion.

Today, Detroit presents a model of post-industrialization in the United States. In the footnotes of its sweeping narrative lie twentieth-century subplots of economic disparity, racial disharmony, and political dysfunction. Overcoming these currents and forging a new course forced its citizens to negotiate the competing interests of the city’s past to reimagine a bold future. In doing so, the region is once again crafting a new identity.

Detroit’s story reflects our own. Collectively and individually, we are constantly evolving, embracing new opportunities, and reacting to forces beyond our control. Navigating these contemporary challenges, while facing an unpredictable future, requires periodically re-thinking our direction. In doing so, we rely on the past for context, examples, and inspiration. The role of a public historian is especially critical during times of transition.

In the spirit of this theme, the Program Committee seeks proposals that:

Deadline for session proposals is December 7.

Learn more on submitting a session and how to submit online.