In the context of a conference on computerization of museum catalog records, more than 20 years ago, I predicted that I wouldn’t live long enough to see documentary photographs routinely incorporated into catalog records. Was I ever wrong! 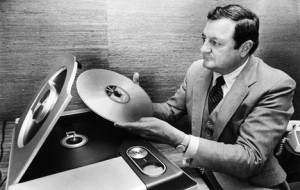 Of course, back then the storage of images ate up large gulps of hard drive “real estate” that was still being measured in tens of megabytes. Videodisc platters (above) could accommodate vast numbers of images, but could neither be edited nor added to once they had been recorded. Moreover, the cost of their production and the hardware to run them limited their use to large institutions that could afford to ride on the “bleeding edge” of technology. “Cloud storage” was still reserved for raindrops and occasional hailstones. I never dreamed that onboard storage capacities of ordinary desktop or even laptop computers would reach gigabyte and terabyte magnitudes while still remaining within the range of affordability for museums of even modest means.

Another prediction that I made at the same time (and which, sadly, may be coming true) was that when and if images could be routinely added to catalog records it would result in a lessening of attention paid to the recording of “old fashioned” alphanumeric descriptive information. I’m afraid that is happening.

It’s only natural, I suppose, if you’re generating a record that includes a photograph of something round and red, and with a scale indicating a 10-inch maximum dimension, to regard these features as so obvious that there’s no need to “waste” time and effort by entering “round” or “red” or “10 inches” via keystrokes. That’s so 20th century, right?

WRONG! It’s important to remember that the words (and numbers) still matter. Until someone develops an algorithm for searching stored images for such characteristics as redness, roundness and/or 10-inchness the search and retrieval of object records from a database will continue to rely upon those “old fashioned” words and numbers. If that alphanumeric descriptive information is not entered, an artifact, document or specimen will remain invisible to a computerized search based upon such parameters – as if it never existed.