A Pivotal Moment in Our History: A Century of Women’s Rights Work and the 2016 Election

A Pivotal Moment in Our History: A Century of Women’s Rights Work and the 2016 Election 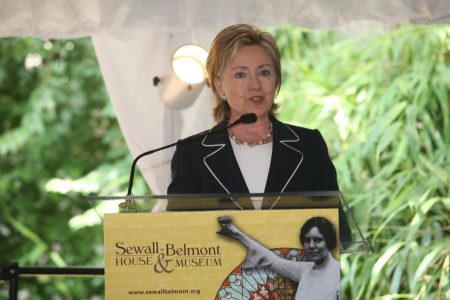 On April 12, 2016, President Obama designated the historic headquarters of the National Woman’s Party (NWP) in Washington, D.C. the Belmont-Paul Women’s Equality National Monument. Named for NWP founder Alice Paul, and the organization’s original benefactor and president from 1920-1933, Alva Belmont, the 200-year old site ensures ongoing and future access to the NWP’s vast collection about the movement to secure women’s suffrage and equal rights in the United States and across the globe.

This year, as we celebrate the centennial of the NWP’s creation, there is the very real possibility that a woman, Hillary Clinton, may finally ascend to the highest elected office in the United States. The convergence of a centennial of women’s rights work and a truly historic election make the site and the NWP’s collection take on greater significance as essential to modern conversations about the history of the women’s rights movement and the ongoing fight for women’s legal, economic, social, and political equality. 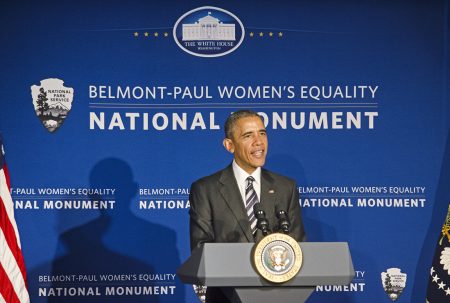 President Obama at the podium at the April 12, 2016 Designation. Photograph by Haley Harrington.

It is important to remember that while the National Woman’s Party’s work for female suffrage brought about a great shift for women in the political realm, change didn’t happen all at once. When the 19th Amendment passed in 1920, Alice Paul knew it would take many more decades before women became completely equal to men under the law. Indeed, some would argue that we’re still not there. Women’s progress in many fields has been slow. The NWP collection demonstrates the years of work to promote issues, including women’s citizenship, participation on juries, property ownership, reforms to marriage, divorce and labor laws, and hundreds of other pieces of legislation influenced by the NWP’s activism. There is a gallery in Belmont-Paul where visitors learn about pioneering political women including Jeanette Rankin, the first woman elected to Congress in 1916; Shirley Chisholm, the first African-American woman elected to Congress in 1968; and Barbara Mikulski, the longest-serving woman in the history of Congress, from 1987 to 2016. 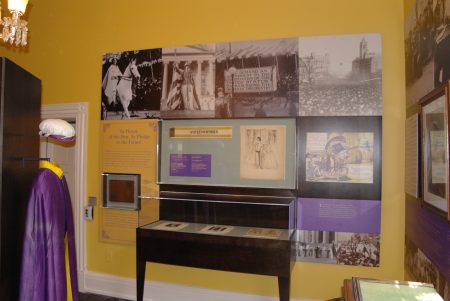 Other exhibits reflect on the NWP’s 1924 and 1926 “Women for Congress” campaigns, when the Party encouraged women to rally behind qualified women candidates, even going so far as to encourage setting aside party affiliations to support candidates “on the strength of their fitness to serve the woman’s cause.” Although these particular campaigns in the 1920s were unsuccessful in electing women to office, their importance to the conversation today cannot be understated–these campaigns and the strategy to elect women who would work for women is often a central part of the dialogue we engage in with visitors. Indeed, many visitors are also surprised to find that some of the goals the NWP worked toward as early as 1923 like equal pay and family leave are much the same as issues in public debate today. 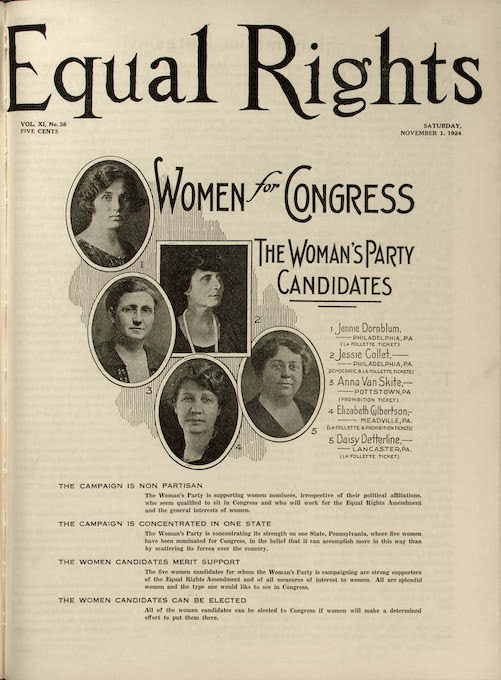 On Tuesday, November 8th, 2016, we face another pivotal moment in our history. As the country approaches the centennial of the 19th Amendment in 2020, millions of women for the first time have the opportunity to vote for a woman for president. Not only could Hillary Clinton become our nation’s first female president, but the banners, images, and ephemera from today’s campaigns may soon reside in our exhibits alongside the banners and tools created by the NWP. In 2009, Clinton received the annual Alice Award from the National Woman’s Party, an honor presented to distinguished women who have made outstanding contributions in breaking barriers and setting new precedents for women. At that luncheon, she discussed the contributions of Alice Paul and the National Woman’s Party, and their resonance today, saying:

“Alice Paul was a visionary and a pioneer. She believed that gender equality was a moral imperative as well as a foundation for progress. And her struggle for women’s rights was built on the premise that no society or nation can reach its full potential if half of the population is left behind . . .. [Paul’s] work continues today not only through this wonderful home that was hers and a headquarters for the National Woman’s Party, but through all of us.”  (Source)

Clinton’s words echo throughout our work as we continue to share the untold and unfinished stories of the women’s rights movement and the individuals who challenged traditional notions of “women’s place” and moved us all forward. As the NWP continues to wrestle with questions about how far women have come and the work that remains, we can agree that Tuesday, November 8th, will be a historic day for the nation, and a day that will be celebrated alongside the decades of effort made by the historic National Woman’s Party. 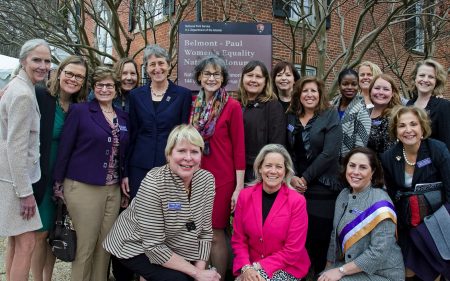 NWP Board of Directors with Secretary of the Interior Sally Jewell at the April 12, 2016 Designation. Photograph by Haley Harrington.