Her Hat Was In The Ring: How Digital Collections Can Transform Our Understanding of the Past

Her Hat Was In The Ring: How Digital Collections Can Transform Our Understanding of the Past 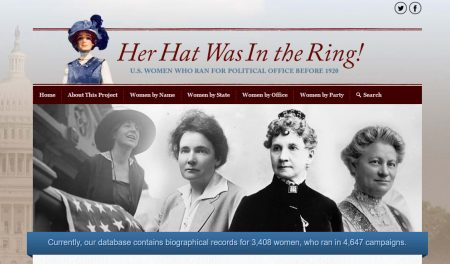 Amid all the discussions about the unprecedented campaign for U.S. president by a woman candidate, it is important to have historical perspective. Until recently, scholarship on U.S. elections virtually ignored women who ran for public office before the ratification of the Nineteenth Amendment in 1920. Hillary Clinton’s candidacy has brought this history to the forefront and provides us the opportunity to reflect on the importance of connecting the present with the past. One resource that strives to do that is Her Hat Was In The Ring, which shares information about the thousands of women who ran for public office in the U.S. before women had universal suffrage.

Two women scholarsDr. Wendy Chmielewski, Curator of the Swarthmore College Peace Collection, and Dr. Jill Norgren, professor emerita of political science at John Jay College, and the Graduate Center, the City University of New York–started eight years ago collecting information about women who ran for public office before the granting of universal women’s suffrage. When they began, they imagined there might be perhaps a few hundred such women. Today, the project has recorded the stories of almost four thousand women and counting. 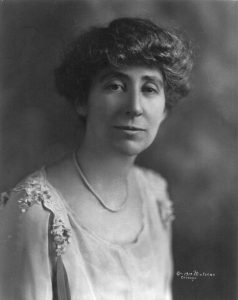 In 1916 Jeannette Rankin became the first woman ever elected to the United States Congress (House of Representatives).

As the data grew, Chmielewski and Norgren realized they needed help organizing, analyzing, and sharing what they had gathered. They reached out to me because of my background as an historian and as the leader of HistoryIT, a digital history company. As a scholar, I immediately recognized the importance of this project and agreed to contribute my time and donate HistoryIT’s resources toward this labor of love. The initial data reshaped the common narrative about the history of women’s political participation, which had primarily focused on the woman’s suffrage movement as the crucial civil rights movement for American women and claimed that women rarely ran for public office. Her Hat Was In The Ring provides evidence–lots of it–that women ran for local and state offices, often successfully, under the auspices of local political parties as early as 1853.

As a digital innovator, I was intrigued by Her Hat in another way. It is the clearest example of the power and potential of digital primary resources that I have seen. Only a minuscule portion of the primary sources in this country have been digitized and made available in an easy way for the public to explore. Researchers for this project compiled information about thousands of women mainly from digital primary sources. Had these sources not been available and discoverable, we would likely never know the stories of these trailblazing women and we certainly would not understand the broader narrative that women were politically active across the country as far back as the mid-19th century that becomes evident when we are able to collect all of their stories in one place. In other words, Her Hat–a compilation of research that transforms our knowledge of the past–is available only because the resources that contained their stories are now available digitally. Her Hat clearly illustrates the incredible value there is in digitizing our historical collections. It also begs to question how many more women ran for political office before 1920 whose historical records have not yet been made digitally accessible and risk forever remaining among the uncounted.