On April 27,  AASLH hosted a luncheon at the American Alliance of Museums annual meeting in Atlanta. Members and friends took time out of their busy conference schedules to enjoy thought-provoking discussion and entertainment.

The lunch hour began with a performance from members of the world-famous Morehouse College Glee Club. Morehouse College, with roots stretching back to 1867 in Atlanta, is a prestigious all-male historically black liberal arts college. Notable alumni include Dr. Martin Luther King, Jr., Spike Lee, former Atlanta mayor Maynard Jackson, former U.S. Surgeon General David Satcher, technologist Paul Q. Judge, and many others. The Glee Club was founded in 1911 and has performed around the world at events including Carter’s presidential inauguration, Dr. King’s funeral, Super Bowl XXVIII, and the 1996 Summer Olympics. 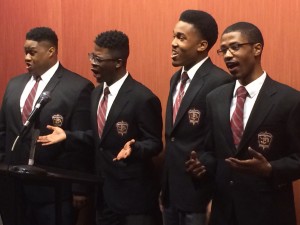 Four members of the Glee Club, directed by Dr. David Morrow, performed a selection of a cappella songs including some historical pieces such as “Would You Rather Be a Colonel with an Eagle on Your Shoulder, or a Private with a Chicken on Your Knee?”  We greatly enjoyed the Morehouse performance, and the singers received a standing ovation from the audience.

Cliff Kuhn, history professor at Georgia State University and executive director of the Oral History Association, gave a talk focusing on the “long Civil Rights Movement” in Atlanta. Cliff is the author of Living Atlanta: An Oral History of the City 1914-1948 and other works focusing on Southern and oral history. 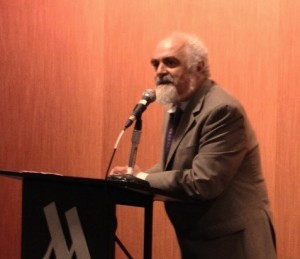 The struggle for civil rights and figures like Dr. King did not emerge from a vacuum, Kuhn stated. Atlanta has a long history of black activism dating back to Reconstruction, which belies the idea that the Civil Rights Movement only gained traction in the postwar period. Aid societies, churches, businesses, and prominent people such as Atlanta Life Insurance Company founder Alonzo Herndon (born a slave, he became the city’s first black millionaire) had been working to gain rights for black citizens since the late 1800s. Cliff’s talk gave us a better understanding of Atlanta’s history and its place as an essential city in a movement that spans more than a century.

The AASLH luncheon at AAM was a great opportunity to catch up with our members and learn more about our host city. We hope you enjoyed the conference as much as we did, and we’ll see you in Washington, D.C. for AAM 2016!