As a student, it isn’t very often that your projects go beyond the classroom and into the community. However, this is one aspect of my Historical Administration M.A. Program at Eastern Illinois University that I have enjoyed deeply. As part of the coursework in two of my classes (Research Methods in American Local History and Introduction to Archival Methods), I had the opportunity to develop a project that allowed me to strengthen my research skills, develop collections management skills, and practice digital methods. You may ask yourself: what project would lend itself to developing these skills?

It all started with the purchase of a few postcards from a local antique store last fall. A colleague of mine at a local museum had never seen these postcards of Lilacia Park in Lombard, Illinois before, so I decided to pick them up.  At the time I was also looking for a project for my methods course. The sources appeared in the form of the postcards, so I considered this as a potential project. 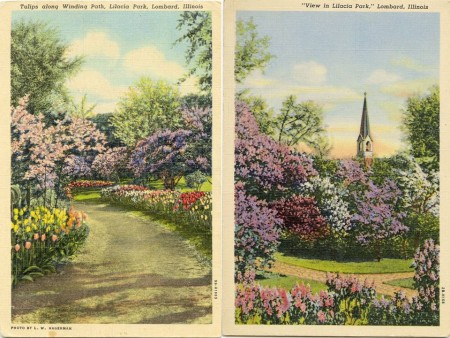 What began as two postcards has turned into a growing personal collection and a partnership with the DuPage County Historical Museum. Postcards like these can show how a place has changed over time and provide numerous views of the same place, much like  photographs. (c. 1951, author’s collection)

In the meantime, we began to read parts of Fay Metcalf and Matthew Downey’s Using Local History in the Classroom. The book, published by AASLH in 1982, analyzes a variety of resources that can be used to write local histories, including family, social, economic, and political history. Metcalf and Downey talk about a variety of sources, but they do not discuss postcards. By utilizing their framework in order to analyze postcards and discuss their importance as a form of historical evidence, I had found my niche and my project. 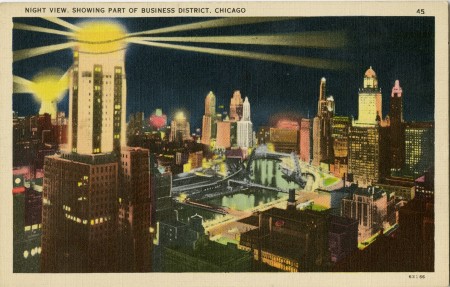 Every postcard tells a story through its image and inscription. The message on the back of this postcard reads: “We had a swell trip to Chicago and no trouble, we’ve been busy ever since I got here going places. We went out to the airport yesterday morn and saw some of the big planes. I’ll write later.” (c. 1939, author’s collection)

Rather than focus simply on postcards from Lombard, I contacted the DuPage County Historical Museum and found that they had a collection of approximately 600 postcards of nearly 24 towns within DuPage County. I set out to analyze these postcards and write a class paper that examined how postcards illustrate the four types of history covered by Metcalf and Downey in the book. 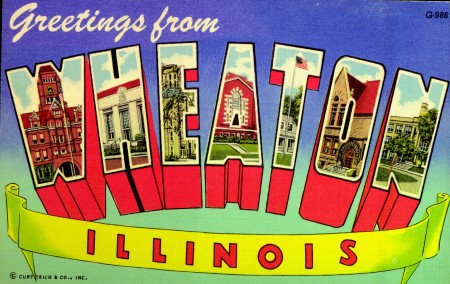 Each postcard conveys a story, and can teach us about our family, our community, and where we come from. (c. 1950, DuPage County Historical Museum, 87.4.3.1)

Over the course of the fall I developed a strong interest in postcards, and even applied for and received a Research/Creative Activity Award from the Graduate College at Eastern Illinois University. This award allowed us to purchase PastPerfect Online to make the catalog of these postcards digitally accessible. Inspired by Metcalf and Downey, I wanted to make these postcards available to the public in a way that they could be used for research and in the classroom.

The museum hopes to have the collection fully accessible to the public by the end of 2015. If you are interested in the research behind this project, check out the online guide “Using Postcards as Historical Evidence.” Feel free to contact me if you have any questions or comments about the project.

Brian Failing is an AASLH student member and Master’s candidate in the Historical Administration Program at Eastern Illinois University. Failing is a museum professional and aspiring public historian. He can be contacted at [email protected].