Alt-rock and Historic Sites in Georgia

Alt-rock and Historic Sites in Georgia

Georgia is home to many interesting things:  Gone with the Wind, the world’s largest peanut statue, a reconstruction of the White House,  and, of course Rock City.  The state is also home to some truly amazing musicians.  James Brown, Little Richard, R.E.M., the B-52’s, the Indigo Girls, and Lady Antebellum just to name a few.  One name that may not ring a bell for everyone yet is Dead Confederate and their lead singer T. Hardy Morris.

Morris is known for his alternative rock and alt-country sound.  But he recently completed a solo project designed to bring public attention to Georgia’s Places in Peril.

Every year, the Georgia Trust for Historic Preservation, like the National Trust, issues a list of historic sites that are in danger from benign neglect or development.  Hardy Morris was raised by parents who are lovers of history and culture, so he has a passion for old places and is a member of the Georgia Trust.

Photographer and filmmaker Jason Thrasher asked Morris if he would do an acoustic video as part of a project Thrasher was putting together with various musicians.  Morris agreed, but wanted to film it at a site from the Places in Peril list — the Rock House in McDuffie County, considered to be the oldest remaining stone house in Georgia.   The project quickly grew into 10 videos which then became the album Audition Tapes, released this year.  The sessions also feature Athens musicians Matt Stoessel and Thayer Sarrano. 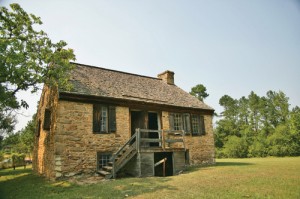 Morris recently explained to a group of high school students learning about historic preservation that he sees the line between art and preservation as being very thin and very fluid, that preservation IS art.  He explains the Audition Tapes project this way:

I’ve always been more interested in the past than the future. I’m fascinated by how people lived, how civilizations have risen & fallen, and especially by the things that have been left behind.  Looking back, we find countless stories of people who had to preserve and survive.

To see the videos and read more about this wonderful project visit: 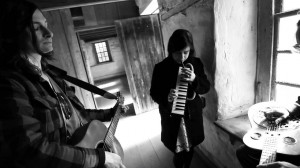 Hardy Morris at the Rock House
photo by Jason Thrasher