Being the Credible Source: What’s in a Citation?

Being the Credible Source: What’s in a Citation?

During the Keynote Address at the AASLH Annual Meeting in Lousiville, Professor Sam Wineburg reminded us of the daunting task faced by teachers everywhere in identifying and using “credible sources” amid the overwhelming amount of information available online today. He used vivid examples of how the most innocent intentions can still result in confusion and, in the most dramatic example, public relations nightmares for local school districts. However, the exciting challenge of his presentation was that we, the historical institutions that safeguard and interpret the primary sources used by teachers, scholars, film-makers, and journalists across the nation, get to be the credible sources that are so needed now. There are any number of ways that we can do this and plenty of them that are specific to our work in education and interpretation.  One simple way is make sure that our materials – whether textual historical content, online exhibit text, or even image captions – contain correct and useful citations.

For example, there is an image that we use to illustrate the founding of the Colony of Georgia that shows industrious workers clearing trees and building the structures associated with the new colony and Georgia’s first city, Savannah. It sometimes appears as a simple illustration to fill a page of text that describes the city and colony’s founding in 1733 and the work of laying out the famous city plan. In a typical school textbook, you would probably brush right past it. 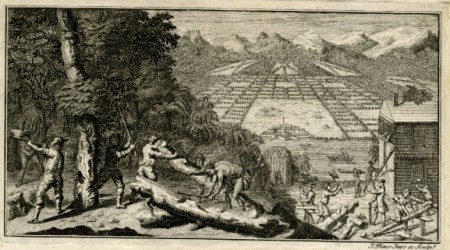 Reasons for Establishing the Colony of Georgia…or selling an ideal?

A closer look at that simple illustration can start a few conversations, however. The first is usually a question about the rugged mountain peaks shown just beyond the outskirts of the city (not something you really see in lowcountry, coastal Georgia). Closer inspection might generate a question or two about the way the city itself is depicted: where are the famous squares? Was there really a wall completely encircling the town? Wait – this was published in 1733 – how could they have built an entire walled city in less than a year? All good questions with answers that become more obvious when you consider the source: a promotional pamphlet entitled, Reasons for Establishing the Colony of Georgia, published in the same year that the first British colonists arrived in what is now Savannah. Its purpose was to promote the colony and encourage financial support for the endeavors begun there. The pamphlet actually has one of those great 18th-century titles that goes on for days and tries to give all the content on the title page: Reasons for establishing the colony of Georgia, with regard to the trade of Great Britain, the increase of our people, and the employment and support it will afford to great numbers of our own poor, as well as foreign persecuted Protestants. With some account of the country, and the design of the trustees.

That title says it all, right? Rather than just a nice way to introduce life and work in the new colony, we are actually seeing a propaganda piece intended to discuss the benefits of this new colony to the British Commonwealth. Therefore the engraving doesn’t actually reflect what anyone would see in Savannah at all. The purpose of the illustration was to sell an ideal.

I think many of us have heard from teachers how difficult it can be to find and identify credible sources for use in their projects and classrooms. We don’t usually have to sell them on the importance of using primary sources with their students. They are happy and willing to do so. At this point, it’s really the ability and tools to navigate the overwhelming barrage of available materials out there that they want. While there are many ways that organizations like ours can lead the charge, one very simple way is always include correct citations in our materials. Not only does it give the user an idea of the source of an object or image, it can give some insight into why it might have been created, how it was used, and how that specific piece fits into a larger context. Knowing that the image of the industrious Georgia colonists was intended to show all of the positive attributes of life in the colony rather than simply showing it as it really looked can help teachers guide their students in understanding the situation in the early days of the colony.

Of course, another consequence of the consistent use of citations is highlighting the importance – the relevance – of the institutions that collect and preserve these materials. As we continue to make the case for history and its relevance in our daily lives, we also have to make the case for the relevance of historical institutions. In a world where everything we need to know and see can be found online, it is still important to know how you can experience the original and know that without those places, we could not experience the digital version as well. Will proper and consistent citations on educational materials solve the problem of confusion over credible sources or even convince the general public (nevermind state and federal legislators) of the importance of professional historical institutions in safeguarding objects and materials of our nation’s past? Who knows? But if even little steps can lead to big changes, this could be one of those steps.