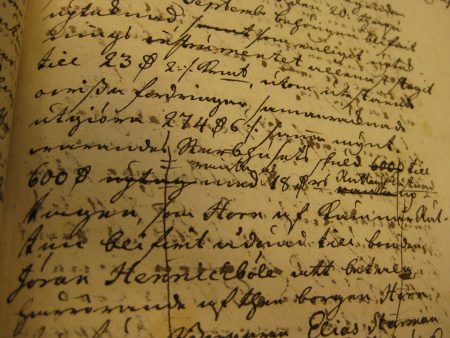 Are you seeking a way to involve community members and schools and, as a bonus, make your document collections easily accessible?

To create such a program, the Historical Society of Cheshire County (HSCC), Keene State College, and Keene High School in New Hampshire teamed up with a grant from the National Historical Publications and Records Commission, a division of the National Archives. Inspired by the crowd-sourced transcription programs of the National Archives and the Smithsonian Institution, we set out to train community members and middle and secondary-school students in transcription of eighteenth and nineteenth-century handwritten documents. Once transcribed, the documents are uploaded to the web, and become publicly accessible.  Our document collections came from the New Hampshire State Archives, New Hampshire State Library, and Historical Society of Cheshire County, New Hampshire. 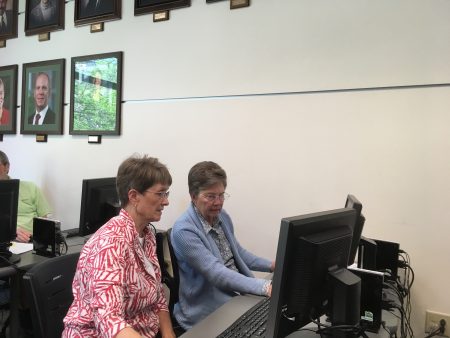 Volunteers working out some difficult script.

We created a community program in two steps. First, we held four one-day workshops for twenty-two participants each.  Advertised through local newspapers and through the newsletters of historical societies and a continuing education program, each workshop met with good enrollment. We scanned roughly thirty documents for each workshop and used Adobe Photoshop and Adobe Acrobat to compile them into PDF files. Absent access to a scanner, photocopies could be used. Each workshop included a biographical presentation on the person who had authored the letters or diaries we were using: a Revolutionary War statesman, an eighteenth-century almanac author, and a Union Army Civil War soldier. Following the biographical presentation, we discussed quirks of older script and common abbreviations volunteers should expect to see in the particular document set. We then spent several hours transcribing in teams of two. Each team had a scanned document uploaded to a computer screen. On a second computer, they typed their transcription.

To ensure all teams followed the same format, we found it important to set clear rules. We followed a “clear text” approach in which “what you see is what you get.” We reproduced in transcription what we saw in the document: for example, the length of each line and the spacing between lines. We did not resolve ambiguities, but noted in brackets uncertainty about a word. Following workshops, we uploaded scanned documents and transcriptions to HSCC’s website and/or to the Keene State Commons which is housed on the website Digital Commons, a platform that includes documents, reference guides, articles and books. The transcriber may also be credited on the webpage. While we were fortunate to have a historian running the workshop, the presence of an expert is not necessary. Anyone wishing to offer a workshop could prepare from websites with tutorials in historical script and transcription formats. Our curriculum and additional resources are listed at the end of this article.

As the second step in developing a community program, the Historical Society of Cheshire County created a Facebook page where volunteers adopt an historic document to transcribe. Each participant receives a welcome packet containing rules for transcription and contextual information.  We publicized the page to the workshop participants who then formed the initial corps of crowd-sourcing volunteers. From this beginning, the group has continued to grow and now includes participants from around the country. 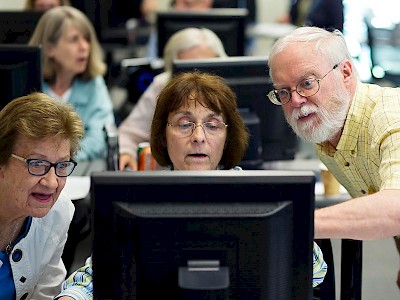 Volunteers ranging in age from middle school students to retirees have enjoyed connecting to the past through transcription. “It’s like solving a puzzle!” was the consensus of students fascinated by transcribing letters of a Civil War soldier. A curriculum developed by Keene High School teachers has been tested in several secondary and middle-school classrooms on topics ranging from entering the workforce as an eighteen-year-old girl in 1850, serving in the Union Army in the Civil War, and the daily life of a thirteen-year old Jewish girl in the 1920s.

As students, singly or in pairs, work slowly through a letter or diary, they develop first a sense of ownership or connection to the author and then an interest in his/her life and times which makes the project useful in Social Studies and English classrooms. Transcription engages students and opens new avenues for discussion. The curriculum includes an introduction to classroom use of documents in older cursive writing, a discussion of common core standards, a list of resources, and five lesson plans:  primary vs. secondary sources, eighteenth and nineteenth-century handwriting, providing historical context, historical transcription, and fact vs. interpretation.

Novice archivists enjoy solving the puzzles of handwriting and phrasing as well as the immediacy of the past conveyed in documents; they enjoy both the craft of transcription and the historical knowledge gained.

Our curriculum, created by the NH Citizen Archivists grant team, is available on the website of the Historical Society of Cheshire County. The National Archives describes “Best Practices for Transcription,” answers questions, and provides examples at http://www.archives.gove/citizen-archivist/transcribe/tips. For documents written before 1700, Scriptorium provides instruction in interpreting handwriting and observing transcription conventions at http://www.english.cam.ac.uk/ceres/ehoc/. The rules followed by Smithsonian transcribers are found at http://transcription.si.edu/insturctions#basic.