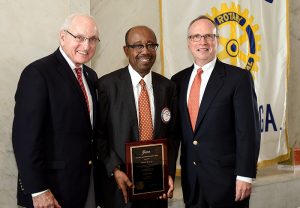 “In grateful recognition of a lifetime of achievement in the field of Georgia history.”

The Georgia Historical Society, AASLH members since 1979, presented Robert L. Brown, Jr. of Decatur with the John Macpherson Berrien Award for a lifetime of achievement in the field of Georgia history and for outstanding service to the Georgia Historical Society (GHS). The award was presented by Vince Dooley, Chairman of the Board of Curators, and Dr. W. Todd Groce, President and CEO of The Society.

“It is a pleasure to present this award to such a deserving individual,” said President Groce. “Because of Robert Brown’s leadership and influence, GHS expanded its mission and programming during his chairmanship. He has been a friend and mentor and I have grown as a leader and a person because of my association with him.”

Robert Brown is president and CEO of R.L. Brown & Associates, one of Georgia’s most highly recognized and respected architectural firms. He is a magna cum laude graduate of Tuskegee University, earning two degrees in architecture. In addition to being a past Chairman of the GHS Board of Curators, he is a member of the Georgia Chamber of Commerce Board of Directors and past Chair of the Metro Atlanta Chamber Board of Directors, and GA DOT State Transportation Board. He is a member of the prestigious College of Fellows of the American Institute of Architects and has been recognized as “Small Business Person of the Year” by the Metro Atlanta Chamber of Commerce; “Entrepreneur of the Year” by the Atlanta Business League; “100 Most Influential Georgians” by Georgia Trend; and received the “Ivan Allen Sr. Award” from the American Institute of Architects.

The John Macpherson Berrien Award is named in memory of the Society’s first president and Attorney General of the United States under President Andrew Jackson. The Berrien award was created to recognize a lifetime of achievement in the field of history and signal contribution toward the Society’s mission to collect, teach and promote research about Georgia and American history. Past recipients include such distinguished Georgians as Malcolm Bell, Jr.; Edward J. Cashin, Augusta; Craig Barrow III, Savannah; John C. Inscoe, Ph.D., Athens; Bill Jones III, Sea Island; and Beverly “Bo” DuBose III, Atlanta.

The award was presented at the September 15 meeting of the Rotary Club of Decatur where Brown is a member and past President.