Several years ago I spent significant time in the Republic of Armenia (2009-2011) studying the language and learning about and from the Armenian people. During my stay I also developed an interest in and respect for Armenia’s Orthodox Christianity: the Armenian Apostolic Church. This interest followed me home, and through my amateur efforts at anthropology I found that Armenian Christianity’s presence in the U.S. has had a decisive role in shaping the Armenian-American diaspora, creating a highly unified religious-ethnic community we all could learn and benefit from. 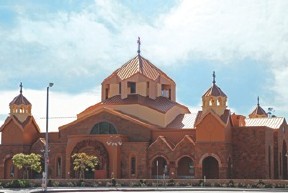 For most Armenians, religion goes bone deep; to be Armenian is to be Christian, and specifically, a member of the Armenian Apostolic Church. In 301 AD, the Armenian Apostolic Church was established and Christianity adopted as the official state religion. But because of its geopolitical location, Armenia became a marginalized power and endured centuries of oppression from neighboring powers. Being subjected to religious genocide at the hands of the Ottoman Empire and seventy years of Soviet imposed atheism, Armenians endured severe persecution and were preserved through their own resiliency and the Armenian Apostolic Church’s archival and faith building efforts. As a result, Armenians are a highly nationalistic people with an inspiring sense of identity and religious communal unity.

While such devotion seems typical of most Orthodox religions, the pervasiveness and longevity of the Armenian identity is truly surprising. In the suburbs of Los Angeles, for example, (or as Armenians liked to call it, “Los Armenios”) a large Armenian community of nearly 54,000 has gathered with some estimates placing the total Armenian population in Southern California at 500,000.[i] I made a trip to the area one summer to examine how the U.S. had changed the inherently nationalistic and religious culture of Armenians as well as to cure my homesickness for the food, language, and culture. What I found was consistent with what I had experienced in Eastern Europe. By in large, Armenian-Americans ate the same foods, said the same proverbs, and associated with the same religion as those in Eastern Europe, my most significant find being that eighty percent of all Armenian-Americans are members of the Apostolic Church.[ii] And while Armenian-Americans have acculturated quickly to political and economic norms, their overall assimilation to U.S. religious culture has been extremely slow. 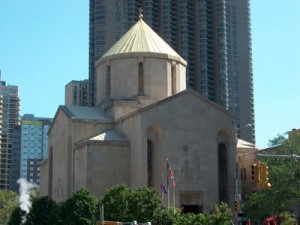 From my observation, Armenian-Americans’ cultural consistency and communal unity can largely be attributed to the Armenian Apostolic Church, and specifically to its architectural and linguistic presence.

Following the distinct architectural style of Armenian Medieval cathedrals, the Armenian churches in the U.S. are hard to miss. Composed almost entirely of stone with ornate patterns and carvings, Armenian churches epitomize craftsmanship and rise up impressively with an obvious vertical emphasis. Crowning each edifice is an iconic pointed dome, usually with one or more smaller domes to offset the larger one. These domes are reminiscent of the volcanic cones of Armenia’s biblical mountain, Mt. Ararat, which dominates the western horizon in southern Armenia.  (See examples: St.Hripsime  (Vagharshapat, Armenia), St. Vartan (Manhattan, NY), and St. Leon (Burbank, CA)). These iconic Armenian structures in local U.S. communities assert a distinct ethnic identity, hailing an ancient style which reflects the native Armenian landscape. These structures ground Armenian-Americans in their heritage and remind them of their native home.

Mt. Ararat in the background with an ancient Armenian church in the foreground

Within these singular buildings the equally unique language of Armenian is read and spoken. Unlike most alphabets, Armenia’s 39 distinct characters are inherently symbolic of its religion. They were created by an early Armenian Christian (Mesrop Mashtots) around 405 AD for the express purpose of translating the Bible. As the Armenian language had no standardized written form up until Mashtots alphabet, he effectively preserved the rich language and became one of Armenia’s most beloved saints.  Armenian is still used in many of their church services and community activities today, making Armenian-Americans one of the least assimilated groups in the U.S. with more than half of them maintaining their ancestral language.[iii] By using Armenian the Apostolic Church communicates an ethnically unifying message amongst those who speak it and perpetuates their proud heritage.

Where Armenians are present, the Armenian Apostolic Church has an influence. And while Armenians are a small minority in U.S. communities, the cultural and communal unity they attain with the help of their Orthodox religion is remarkable. As we attend to more prominent religious histories it is important to remember these marginalized ones and learn from them as we continue to build our institutions.

Ross Garner holds a BA in American Studies from Brigham Young University with a minor in Political Science and an emphasis in Armenian Linguistic and Historical Studies. He looks forward to graduate work in cultural and political studies, examining the spacial stories of minority and religious groups.