Strawbery Banke Museum, a 10-acre outdoor history museum in Portsmouth, NH, has long used archaeological data to aid in the interpretation of our houses. Since the 1960s, archaeologists have discovered information on domestic life, maritime activity and other industries, and have used this information to help reconstruct houses, gardens, roads, and wharves.  Our Conant House is currently being rehabilitated by Bedard Preservation and Restoration.  They have rebuilt a scullery, which was an 18th century addition.  Before construction, the Archaeology Department excavated to determine the original depth of the foundation.

The history of the house is incomplete, but we know that the land was bought in 1697 by Captain John Hill.  The present house was likely built around 1750, and later sold to George Ham in 1791, who we think raised the house foundation and added the scullery.  The house is now named for Aaron Conant, who owned the house from 1834-1856.

We found that the 18th century builders had built a shallow foundation, with only one layer of stones below ground.  Surrounding the existing stones there was a layer of fill dating to when the foundation was built.  This fill included many large chunks of plaster, probably related to Ham’s renovations.  We recovered a few sherds of pearlware from 1800-1830, and a fragment of mochaware, from the 1790s-1890s.  The presence of these particular ceramics in this fill helps confirm that renovations were made after 1790. 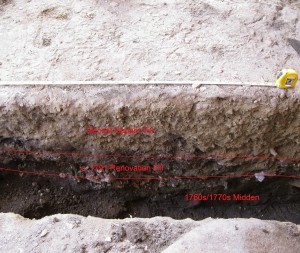 Below the renovation fill, we reached an earlier trash pit.  The artifacts from this layer are exciting as they expand our knowledge of how the lot was used before Ham’s renovations.  We recovered pipe stems from the mid-18th century, and personal artifacts, including a bone comb and button, and a metal button from 1760-1785.  We recovered many creamware sherds from 1762-1780.  The high concentration of creamware in this layer confirms that this area of the lot was in use as a trash pit after 1762.

Now that the scullery has been rebuilt, it is gratifying to know that its location and its history can be confirmed by our archaeological data.