Handling the Holidays – How Does Your Institution Do It?

Handling the Holidays – How Does Your Institution Do It? 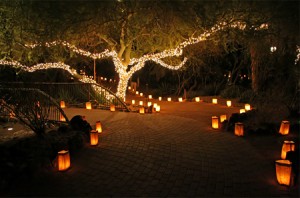 Ok, so it’s not the Chandler Museum, but this photo of the luminarias at the Desert Botanical Garden in neighboring Phoenix is beautiful! Photo credit to the John Wise blog

We are smack dab in the middle of holiday season.  No matter your faith or beliefs, this is the time of year for family, friends, and (maybe) some relaxation.

Small museums sometimes get stuck in between two competing forces this time of year – on the one hand this is often the time of year for celebration, decoration, festivities, and the like; and on the other hand is the force of political correctness and efforts to not offend anyone.  It’s a tightrope trick to balance the two.  Some institutions wade into the holiday celebration whole hog.  Some institutions take a more hands off approach.  And some try to straddle the line.  There’s not really a right or wrong answer to this dilemma.  I would imagine a lot of it has to do with the community in which the museum is located and, let’s face it, who pays the bills (i.e. non-profit or government operation).

My own institution has done a little bit of both over the years.  There was the failed effort at “Cookies and Photos With Santa,” which really just devolved into people trying to avoid the crowds across the street at the mall and getting cheap photos of their kids with the big fella.  It didn’t do anything to increase the Museum’s standing or visibility in the community – most people didn’t know the Museum existed before coming, and probably didn’t give us much thought afterward.  We’ve also had years where we don’t do anything different this time of year  – no special events, no decorations.  But are visitors expecting something more than that when they come in?  Clearly we don’t have the answers.

And how ever you do (or don’t) celebrate at this time of year, here’s wishing you and yours a fantastic new year ahead!