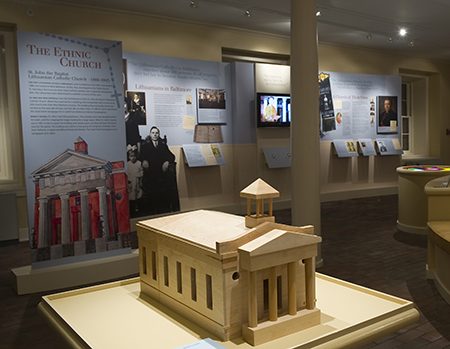 A model of the Lloyd Street Synagogue during its occupancy by St. John the Baptist Roman Catholic Church (1889-1905). Note the addition of a small bell tower at the peak of the roof. Photo courtesy of the Jewish Museum of Maryland.

In the 1980s, when I worked at the Winterthur Museum, the great collection of American decorative arts, I was fascinated most by furniture that was “married” or “improved.”  These were pieces that had been constructed from two earlier pieces, once separate, or that were “modernized” by the addition of fashionable new details. These unusual survivors were quite unlike the pure styles for which Winterthur is noted, but had the advantage that they embodied within themselves the idea of “change over time.”

Many years later, I became the director of the Jewish Museum of Maryland in Baltimore. This museum has the distinction of owning two historic synagogues, one of which, the Lloyd Street Synagogue (1845), is now the third-oldest standing synagogue building in the continental U.S. For me, much of the building’s interest lay in its having been the home of three successive immigrant congregations. 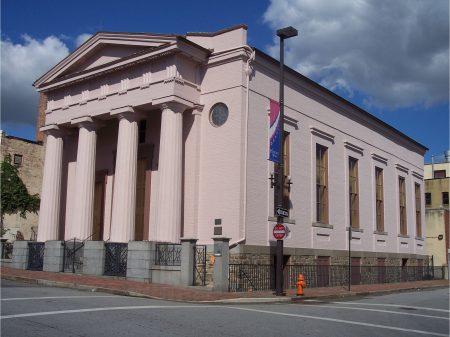 The first, Baltimore Hebrew Congregation, was founded by German-speaking Jews, mostly from central Europe. When this congregation vacated the building in 1889, it was succeeded by St. John the Baptist, a Roman Catholic congregation composed of recent immigrants from Lithuania–one of the early ethnic parishes in Baltimore. In 1905, St. John the Baptist moved out and a congregation of immigrant Jews from eastern Europe moved in. Each of the three groups altered and adapted the building to suit its distinctive traditions and needs.

Lloyd Street Synagogue, in effect, encapsulated nearly a century of European immigration to America. It also represented a distinctly American theme–the tendency of Christian and Jewish congregations to adopt each other’s buildings, a practice virtually unknown in Europe, but a commonplace here in America. The adaptive re-use of religious structures by successive congregations can tell stories of immigration, pluralism, mobility, and ethnic succession. Urban Black churches, for  example, occupied many houses of worship abandoned by white congregations fleeing from neighborhoods in transition.

The story of adaptive re-use is even broader. Many former churches and synagogues have been re-purposed for other uses. In Columbia, SC, for example, the House of Peace Synagogue (1915) became a popular African American nightclub in the 1930s, the place where the Big Apple dance originated. And in many communities across the country, congregations occupy and worship in former stores, schools, and a variety of other building types.

For us as history professionals, these sites of adaptive re-use offer exceptional opportunities for engaging interpretation of social as well as spiritual change. Their complex and hybrid character, can make the stories of these congregational homes every bit as compelling as those of Spanish missions or New England meetinghouses, cathedrals or Shaker villages. After all, religious sites are a sub-category of identity museums–and, given the instability of religious identity in contemporary America–due to intermarriage, conversion, and spiritual search–stories of flux and fluidity can have a special relevance and resonance for our constantly changing audiences.

Avi Decter is the author of the recent AASLH publication Interpreting American Jewish History at Museums and Historic Sites.