This article was originally published in the Summer 2016 issue of History News magazine, the official publication of AASLH. You can read the full article in PDF format here. You can read recent History News articles by becoming a member or find issues older than three years on JSTOR. 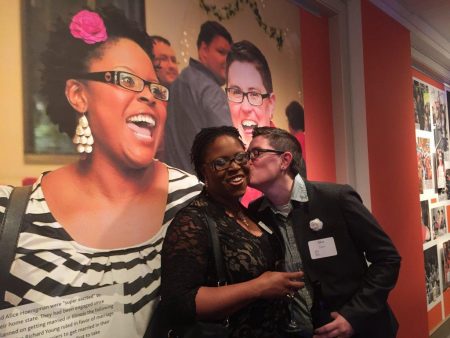 Brittany Jones and Alice Hoenigman in front of their prominent place in the A Visual Journey: From AIDS to Marriage Equality  exhibition  celebrating LGBT history in Indiana

*Police violence against African-Americans in cities including Ferguson, Baltimore, Cleveland, and Chicago sparks protests in the streets and ultimately contributes to the creation of a public #blacklivesmatter movement.

*A Kentucky county clerk refuses to issue marriage licenses in the wake of a Supreme Court ruling, citing religious freedom. The governor of Indiana signs into law the Religious Freedom Restoration Act, then rescinds his signature in the wake of boycotts and massive, nationwide protests and debate over religious freedom and gay rights.

*Congregants in a historic Charleston, South Carolina, black church are shot and killed by a white supremacist terrorist, leading to—among other things—a debate over, and public removal of, the Confederate flag on the statehouse grounds.

*A massive, coordinated attack in Paris leads to worldwide debates over refugees, followed by a majority of governors in the United States publically opposing the resettlement of Syrian refugees in their states.

These are just some of the major cultural issues that communities near and far have grappled with in the twelve months preceding the writing of this article. Who knows how many more will have become part of the public consciousness and discussion by the time you are reading it in the pages of History News. Cultural heritage institutions of all sizes, in major cities and in small towns, staffed by full-time paid professionals or by an army of part-time unpaid volunteers, all face the possibility that an issue like any one of these may drop on their doorstep or affect their community at any time. In fact, at least one of the issues above probably already has. 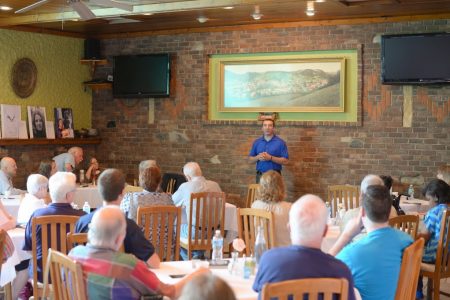 So what can our institutions do about this? What should institutions be doing to prepare for the unexpected? And at an even more basic level, what is any particular institution’s responsibility to its community when one of these situations occurs?

These were all questions posed during a roundtable discussion at the 2015 AASLH Annual Meeting, in a session titled, “Pop Up: Unfolding Events.” The conversations were wide-ranging, engaging, insightful, and at times provocative. More questions were raised than were answered, and ultimately the discussion landed on the idea that, while there is no perfect solution for handling situations like these when they appear, we can all do more to be better prepared to respond when they do. And while each organization faces its own unique set of variables—and there are no one-size-fits all answers to any of these questions—there are some basic, scalable ideas that all institutions can consider and apply to their own unique situation. Here are some steps to consider:

As famous baseball player and philosopher Yogi Berra is credited as saying, “If you don’t know where you are going, you’ll end up someplace else.” This is especially true when planning for the unexpected. Just as a good disaster plan is built on the solid ground work of developing contingencies and relationships that can spring into action when disaster strikes, so too can proactive, strategic thinking help an organization prepare for the “un-preparable.” 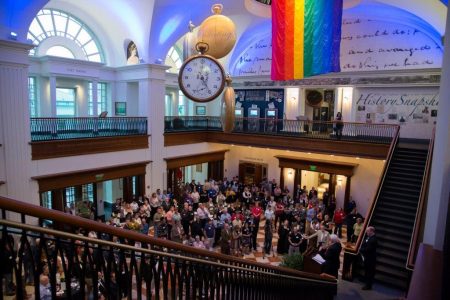 A Visual Journey: From AIDS to Marriage Equality exhibit opening event at the Eugene and Marilyn Glick Indiana History Center.

One of the hallmarks of creating a response to unplanned for events is that they often go hand-in-hand with strong emotions like fear, anger, mistrust, confusion, or defiance. In order for an organization to respond to these events most effectively—whether as an active collector of history as it is happening, a safe space for the community to hold difficult conversations, or a vocal advocate for a position in a particular debate—the organization as a whole needs to be on the same page. From the leadership on one end to the frontline staff on the other, everyone needs to understand, and be willing to stand behind, the role they have defined for the institution. Which brings us to our next point.

What events are we going to respond to? To what extent are we going to respond? These are some of the most basic and important questions any organization must face when determining how to approach building a thoughtful and effective set of responses. Every good set of mission, vision, and values statements helps an institution define its inherent strengths, its realized or aspirational niche, and its perceived value to the community, as well as aids in setting a limited range of responsibilities and expectations in the face of unlimited possibilities. The same holds true for any organization trying to be proactive in its community. Determining in broad strokes what sorts of situations should warrant small-, medium-, or large-scale responses is the first step in defining the organization’s scope of response. The second step is to determine what the available tools should be for each of those levels of response. When is a public statement of principle or an editorial in the local paper called for? When should the response be a set of public programs that help put the events of the day in historical context? And what events should warrant a large-scale, game-changing response the likes of which are usually only reserved for the most dramatic of events? 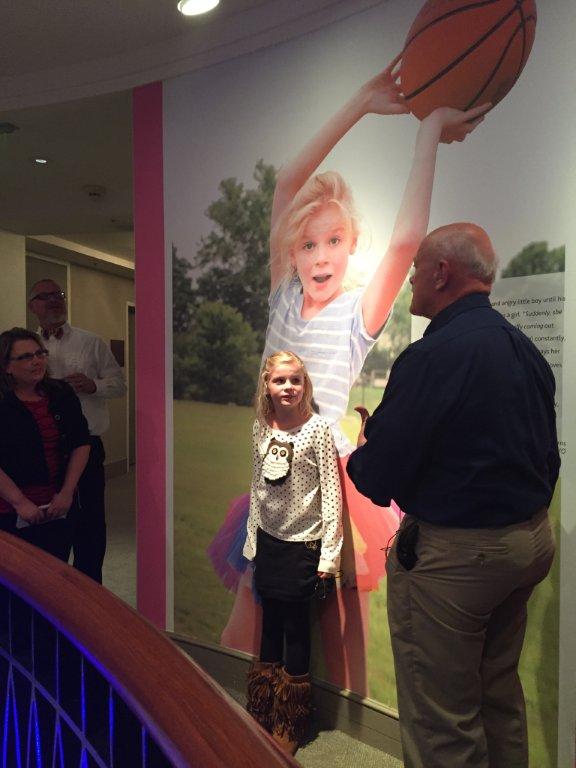 Nine-year-old Dominice Denny shares her story as part of the transgender community in the exhibit A Visual Journey: From AIDS to Marriage Equality

All cultural heritage institutions are engaged in their communities to one extent or another. It’s why we exist in the first place. That said, some of the toughest challenges facing us today revolve around the very concept of community engagement and relevance. Who is your audience? Who is your community? Has your organization been able to adapt to the changing demographics of the community it was designed to serve? Does your mission allow for that? Answering these questions will not only help you deal with questions of relevance and community value but doing so will also position your organization to better handle the sorts of unexpected events or issues that it may face now or in the future.

There is probably no need to reinvent the wheel. Much of our everyday work is already about connecting people to the history that surrounds them and seeking to find relevance in that. In some cases it may not be that different from where you’ll end up if you try to incorporate preparing for unexpected events into the DNA of your organization. Are there things you are doing now that already prepare you for the unexpected—or would with some minor tweaking? Leverage and build off of those activities. Once you build relationships, maintain them. Look for ways to extend what you do outside of your own space. Make sure the community has a voice in the work that you do. The truth is that if you address the other steps suggested above, the accumulated effect should be represented in how you do this work. And that can have a big effect on whether you are ready when it is time to jump.

[To read the rest of this article, download the PDF or use the PDF reader below.]