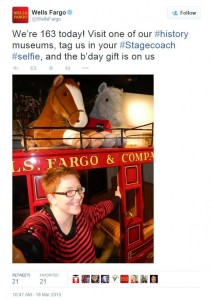 With many museum visitors now carrying smart devices everywhere they go, a museum visit now typically includes on-the-spot social media activity. Earlier this year, a number of museums (sometimes begrudgingly) embraced this trend by celebrating Museum Selfie Day. On January 21st, Wells Fargo History Museums across the United States were among the multitude of museums that participated in this event.

Visitors were encouraged to use the hashtags #museumselfie and #wfmuseum with photos they took during their museum visit that day. Instagram, Twitter, and Facebook were flooded with smiling faces heralding a fun museum experience. Throughout the day, we tracked our social media activity using a hashtag aggregator called Hashtagr and watched as awareness of our little museum rapidly expanded. The experience was so positive for all eleven of our museums that my fellow managers readily agreed to give the hashtag idea another run.

As the anniversary of Wells Fargo’s founding drew near, I suggested that we put a company twist on Museum Selfie Day, and celebrate our 163rd birthday with Stagecoach Selfie Day. Visitors were promised a free gift after they posted their selfie, and we sweetened the pot with some celebratory snacks at each location. Again, we used Hashtagr to track incoming selfies and marveled as guests crowded around the aggregator screen to see their photo pop up alongside photos from all over the country. The excitement of the visitors and their eagerness to participate brought a new energy into the museum, an energy we plan to maintain with interactive programs and more social media fun!

Many museums have found innovative ways to use social media as a free marketing tool, and the use of hashtags has become a large part of that. While social media marketing still has its detractors, one can’t argue with the numbers. Our event, held between noon and 2pm on Wednesday, March 18th, outperformed the previous two days’ visitor numbers in those hours by over 250%! Have you had similar positive experiences using social media? In what innovative ways does your company merge its history and its future to reach new eyes?

Patrick Wittwer is the Museum Manager at the Wells Fargo History Museum in Philadelphia.