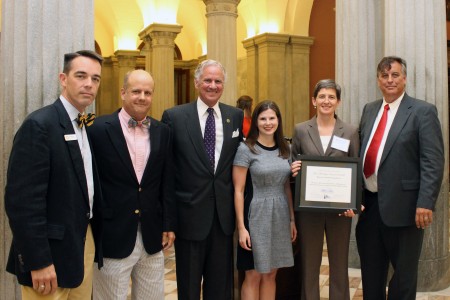 The S.C. Historic Preservation Heritage Tourism Award recognizes those who best use South Carolina’s cultural and historic resources in the promotion and development of tourism or use tourism to directly benefit the preservation of the state’s heritage. The awards are sponsored by the Palmetto Trust for Historic Preservation, the S.C. Department of Archives & History and the Office of the Governor.

“We are proud to have developed exhibits and tours at the Woodrow Wilson Family Home that resonate with so many visitors from South Carolina and far beyond,” said Historic Columbia Executive Director Robin Waites. “The story of the Reconstruction Era needs to be told, and it is clear from our numbers that it is one people across the country are eager to understand.”

Historic Columbia received the Heritage Tourism Award for the reinterpretation of the Woodrow Wilson Family Home: A Museum of Reconstruction in Columbia & Richland County, South Carolina’s only presidential site and the only museum in the United States to focus solely on the Reconstruction era. Closed for nearly nine years, the Wilson home reopened on February 15, 2014 after an unprecedented comprehensive physical rehabilitation and reinterpretation of the content presented in the museum. This project also received an AASLH Leadership in History award this year.

During the restoration, Historic Columbia assembled a team of distinguished scholars from the University of South Carolina to create a new interpretive scheme to would showcase the Wilson family in the context of the Reconstruction era, the transformative years when they called Columbia home. The property not only tells the story of the young future president’s life in Columbia; it uses the Wilson family as a springboard to the larger of story of what was happening in South Carolina in the years following the Civil War.

Central to that story is the experience of African Americans, considered citizens for the first time in southern history. Visitors to the Woodrow Wilson Family Home are immersed in the context of Columbia in the 1870s as they explore how Columbia’s 9,297 residents, both black and white, navigated the profound political, social and economic changes of Reconstruction. Through panel exhibits, interactive technologies and guided tours, visitors learn that this was a time when African Americans participated in government, founded churches, claimed access to education and negotiated new terms of labor.

“The sensitive rehabilitation of the Woodrow Wilson Family Home has reaffirmed the site’s position as a vibrant cultural attraction in the capital city and resulted in more successful stewardship of one of South Carolina’s most important properties associated with Reconstruction.,” said John Sherrer, Historic Columbia’s director of cultural resources. “At the Wilson home, Historic Columbia is able share with visitors Columbia’s 19th-century history and deconstruct the history of Reconstruction so prevalent in society today.”

The Woodrow Wilson Family Home: A Museum of Reconstruction in Columbia & Richland County is open for tours Tuesday – Saturday at 11 a.m., 1 p.m. and 3 p.m., and Sunday at 2 p.m. and 4 p.m. Tour admission can be purchased at the Gift Shop at Robert Mills, 1616 Blanding Street. Tours are $8 for adults, $5 for youth and free for Historic Columbia members. For more information, visit historiccolumbia.org.

In November 1961, a small group of individuals intent on saving the Ainsley Hall House from demolition officially incorporated as the Historic Columbia Foundation. Over the next five decades the organization, which was founded on the premise of preservation and education, would take on the stewardship of seven historic properties in Richland County. Today, the organization serves as a model for local preservation efforts and interpretation of local history. Visit historiccolumbia.org or find us on Twitter, Facebook, Instagram or YouTube for more details.