Historical Markers as an Arts Project?

Historical Markers as an Arts Project?

When I took a call from Dr. Holly Goldstein, a local art history professor at the Savannah College of Art and Design (SCAD) in the fall of 2013, I was skeptical of her proposal.  She said she’d noticed our mobile app for Georgia historical markers and wondered if there was any way her students could contribute content to the app’s database.  While I wasn’t sold entirely on the idea of art students contributing content to a project on historical markers, it did open a door of opportunity on a problem we had been trying to solve internally for some time.  We had wanted to find a way to add additional online content to existing entries on historical markers across the state and we wanted to tie the markers more directly to materials in our collection related to the marker topics. Of course, we faced the perennial problem of history organizations everywhere: a significant lack of time and resources. 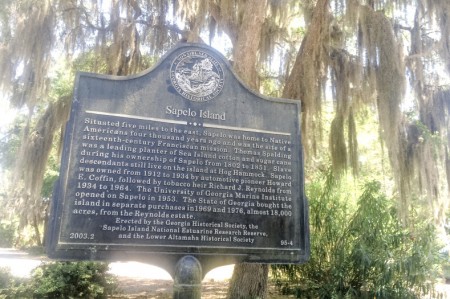 As we talked on, the possibilities of creating a very interesting project began to develop.  She wanted to develop a course that would help her students learn more about the community.  Because many (if not most) of her students were at least from out of town if not from out of state, most had little background knowledge of the community in which they now lived. Dr. Goldstein wanted to use the opportunity of introducing the students to local history as a way of also introducing larger ideas of community identity and the importance of place in developing culture.  Since these were themes that the Georgia Historical Society had explored in various public and educator training programs over the past decade, this seemed like a great opportunity for collaboration and mutual benefit.

Savannah, Georgia is an interesting place.  It has a billion dollar tourist industry and a picture-perfect image of graceful hospitality.  Like most places, however, it also has a complicated history.  The larger point of the class that Dr. Goldstein developed was to encourage her students to look beyond the ways that this city (and, by extension, any place) presents itself to the public and find the “hidden” stories – the people or events that may have been overlooked or underrepresented.  She felt, and we agreed, that historical markers would be a great way to focus some of this inquiry.

The Georgia Historical Society (GHS) has administered the Georgia Historical Marker Program since 1998.  Since that time we have erected nearly 250 historical markers across the state.  These newer markers add to over 2,000 existing historical markers in Georgia erected in the fifty years prior to GHS taking over responsibility for the program.  While it has been a tenet of the GHS program over the past seventeen years to tell the stories previously overlooked by historical marker projects, there has always been a need to go deeper and wider than a 130-word marker text can go.

And that is where this project presented so many great possibilities.  Dr. Goldstein’s students would each identify one local historical marker, conduct research in the GHS library as well as other local archives and sources, and submit new content that could be housed on the GHS website.  Specifically, they would submit new written content focusing on a tangential element of the existing text – maybe highlighting a particular individual mentioned (or not mentioned) in the text, or delving deeper into a related aspect of the marker’s story.  Then they would identify and submit relevant historical images or other archival materials to help illustrate and tell their story more fully.  Finally, they would submit their own original works to round out the content.  Remembering that these were art students gives the idea of how interesting and unique this final element could be.  A new, original depiction by illustration major Charlie Swerdlow showing his interpretation of the original Yamacraw Creek settlement that would have been experienced by Georgia’s fist British colonists helps fill out the existing marker text discussing Jonathan Bryan, one of those colonists.  Dylan Wilson’s 2014 project based on historical marker for Sapelo Island actually led to his recent thesis exhibition, “Missing Voices: Field Notes and Photographs from Sapelo Island.” 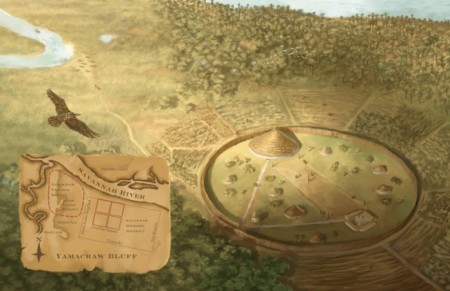 Reconstruction of the Yamacraw’s Village. Courtesy of Charlie Swerdlow.

Now in its third year, this “Hidden Histories” project has already contributed significant ancillary content to the marker database available on our website.  Further, the project has enhanced student understanding of their community and stories that we tell (and omit) in developing our identity.  We look forward to continuing this project and seeing how many new stories can emerge from these existing resources.  It turns out that while historical markers are among the most traditional of historical resources, the potential they hold for exploring new ideas is as great as the imagination of a university art student!