Historical Societies and the March of Time

Historical Societies and the March of Time

By studying demographics, we can see that life for historical societies is about to change. But will it change on our terms, or not? If we act appropriately, we can rescue local identity.

In the early 1900s, this group controlled the local politics in a small Massachusetts town, all the way down to appointments for sealers of weights and measures. But we know that inclusion is the key to the success of any organization, especially historical societies, in the early 2000s. Photo courtesy of Hull Historical Society.

When we look at the chart of U.S. live births from 1905 forward, we see definite 20-year patterns–the G.I. Generation, the Silent Generation, the Baby Boomers, Generation X–and what looks like a 25-year grouping of Generation Y births, the Millennials. The main story we are faced with now is that the Boomers are retiring and Generation X is taking charge of the country’s infrastructure, but there are 11% fewer of them (or, “us,” I should say) than there were of the Boomers. Generation X won’t be able to fill the shoes of the Boomers, not because of quality issues like work ethic, but because there were just way too many shoes in comparison. For every ten Boomer retirees, nine Gen X’ers stand ready to take their places.

So what does this mean for the country? If it’s a service the Boomers want or need as retirees, expect a fifteen-or-so-year run, but then be faced with the fact that the population of retirees falls off the cliff when Generation X starts to hit 65. Businesses providing those services will need to consider consolidation, mergers or getting out of the business and moving into services that Generation Y can use, because that’s where the greatest portion of the population will be.

Let me give you an example that I have been thinking about. For many years I have worked with local historical societies. They have had a strong run since the beginning of the twentieth century, but have always found it hard to do two things: find new board members and attract young families. The running joke is that local societies have always been run by “little old ladies in white tennis shoes.”

And they’ve done a good job, but can they, as a force, sustain the pattern?

Consider what I stated above. Once Generation X hits 65, there will quickly become a dearth of retirees in comparison to the previous generation. That’s strike one. There will simply be fewer people around who typically fit the description of local historical society leaders. Sadly, this also takes away a large portion of the membership that attends lectures, nostalgic programs and more. Fewer people will be available to run historical societies, and fewer will be interested in what they have to offer.

But there are more factors involved. The typical local historical society board member has strong ties to his or her community. He can say, “I was born on Main Street, right between the Smith house and the Washington house. My dad ran the local gas station, right over there, and my mom taught at the elementary school for 36 years.” How many of us can say that anymore? We have become transient as a society and no longer can claim that the old adage “you marry someone born within 25 miles of where you were born” is absolutely true. We’re not local in nature anymore. There will be fewer and fewer people with long, deep knowledge of local landscapes, people who are really dedicated to the preservation of their hometown history. That’s strike two. 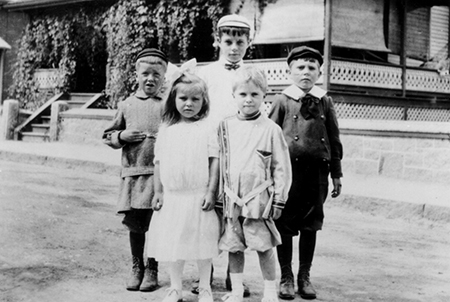 Time marches forward, unrelentingly, and, as such, kids are always the key to our future – and that includes historical societies. If we engage them when they’re young, there’a a better chance we can hand the keys to our beloved institutions off to them. Generation Y represents the opportunity for the biggest hand-off ever in American history. Photo courtesy of Hull Historical Society.

Can you see a pattern? Now, consider this final pitch. Local historical societies are just that – local. I had the pleasure of working with a friend who was as fiercely dedicated to his hometown as anybody I have ever met. He had this beat-up old pickup truck that he bumped all over town, and we used to joke that it had never seen the neighboring towns. Wouldn’t you know it, one day he was driving it to the next town over, and it died on the town border. Local historical societies as they currently operate can be just that myopic; they can’t see beyond the borders of their towns.

In coming years, with the factors above brewing, the first best course of action for historical societies will be consolidation of governance into regional boards of directors covering several local towns. But Springfield wants nothing to do with Shelbyville, and Shelbyville definitely wants nothing to do with North Haverbrook. The only saving grace here is that the generation that will be in charge, Generation X, will not have the fierce local fidelity of the Boomers, and might actually consider consolidation. But what happens if local towns can’t work and play well together? A lot of padlocked buildings, the redistribution of artifacts to regional, state and national level institutions (there will still be costs like insurance that will have to be met, without revenue coming in from membership) and a loss of local identity.

So, what’s the answer, to avoid the strikeout? Engage Generation Y. Exhibits will have to become less static, more digital. Programs will have to become kid-friendly, catering to young families. Membership packages must have perks the whole family can enjoy. Societies will have to teach history through fun at an early age, as kids no longer get it in school. Elementary schools now teach to standardized math and English tests and have made science and history sidelights of the school year. The STEM (Science, Technology, Engineering and Math) movement has arisen as a counterculture for the science side, and science museums and nature centers have become integral partners in science education; history has no such counterpart movement.

And–most importantly–understand that American history is not as white as our traditional interpretations suggest. Societies will have to embrace all of the cultures that make–and have made–their communities great, so that they might become a part of the future of the local history world. We are growing more diverse as a country, not less, and that must be reflected in our local historical societies. Then, with families engaged, and a broader spectrum of cultures involved, Generation Y may provide the leadership needed. If it benefits their kids, they will be willing to support it.

Once we understand the march of the generations through time, we can see how things have to change.