Sharing Nashville’s Civil Rights Past with the Police

Sharing Nashville’s Civil Rights Past with the Police 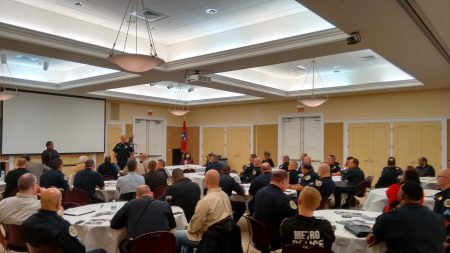 Supervisors to first-responders attend training offered by staff of the Civil Rights Room of the Nashville Public Library.

This article was originally published in the Summer 2016 issue of History News magazine, the official publication of AASLH. You can read the full article in PDF format here. You can read recent History News articles by becoming a member or find issues older than three years on JSTOR.

In October 2015, the Nashville Public Library hosted Metro Nashville Police Department (MNPD) recruits, active officers, and their supervi­sors to the library’s award-winning Civil Rights Room for a history lesson. The purpose of the program was to provide law enforcement officers with infor­mation about local events of the Civil Rights Movement. At the same time, the program aimed to guide officers and trainees in consideration of contempo­rary social justice issues related to law enforcement and the public, particularly for communities of color. Because Civil Rights and a Civil Society represents not only good practice, but, in the words of one reviewer, “Possibly live-saving work in training law enforcement officers.” [1] The program earned the library one of three 2016 HIP (History in Progress) Awards from AASLH.

More Than a Tour

According to Andrea Blackman, who heads the Special Collections Division and its Civil Rights Room at the library, the Civil Rights and a Civil Society program is an extension of tours of its Civil Rights Room. Yet the law enforcement training program goes well beyond a normal tour. It puts Civil Rights Room resources— including photographs, oral history interviews, and ephemera collected during demonstrations and sit-ins—into participants’ hands. Staff follows this with a facilitated discussion. “By bringing his­tory into diversity training, we are able to discuss complex community dynamics in a way that encourages open discussion and greater understanding through a his­torical framework,” explains Blackman. “Our goal is to educate [law enforcement professionals] about the past to inform their present and future interactions with civilians in our community.”[2]

Participants in Civil Rights and a Civil Society start their program with a visit to the Civil Rights Room, where they gather around a mock lunch counter surrounded by photographs from the Nashville Movement. A staff member welcomes participants and gives them a brief overview of the Nashville Sit-Ins of 1960. Participants then move into a classroom-style space in which they view together a documentary about school desegregation in Nashville. During the second half of the program, law enforcement officers and trainees analyze photographs of events in the Nashville Movement. Working in groups, they locate the stories depicted in the pho­tographs. In this atmosphere, and with encouragement from library staff, dia­logue takes place. Topics discussed in small groups include the role of media in movements for social change, the role of law enforcement in such movements, and, sometimes, participants’ personal experiences. In a town that is rapidly diversifying and with a police force that is predominately white, these are import­ant conversations to have. The program opens a dialogue among the participants that continues throughout their training and, hopefully, their careers. 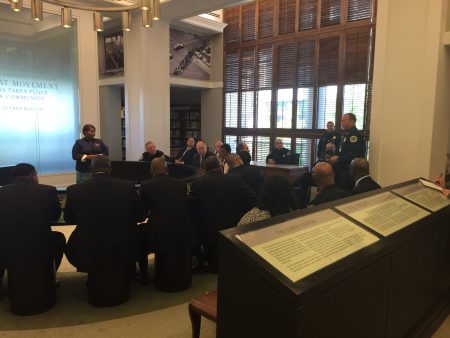 In a May 2016 speech delivered in Birmingham’s Sixteenth Street Baptist Church, FBI Director James Comey said to officials from every level of law enforcement that local, state, and federal officers, “All need to understand and stare at…hard truths.” Explaining why he, like his predecessor Louis Freeh, has analysts and agents-in-training study in a course dedicated to the FBI’s interactions with Dr. Martin Luther King Jr., Comey said that he and others in law enforcement at every level, “have to see ourselves clearly. We need to understand our history, much of which is not pretty. The truth is that the history of law enforcement in the United States was that we were often the enforcers of the status quo, which was mighty rough on a whole lot of folks especially minority communities, immi­grant communities, communities without power. We have to remember that history because the people we serve and protect cannot forget it.”[2]

Civil Rights and a Civil Society program participant and MNPD police officer trainee Nakia Reid told a local news sta­tion that she decided to become a police officer after she recognized police officers helping others. Still, she said that the history-based training at the library was unexpected and that it sparked conversa­tion among trainees even after they left the library. “Once we left [the training], I came out more knowledgeable of how the Civil Rights Movement of the 1950s and ’60s affected Nashville, how the community handled it. We were all on the bus together and kept talking about it.” Media coverage of the program is also part of what makes it a model for other history museums and institutions. MNPD volunteer chaplain Michael Joyner observed that participation in the program would not only benefit the offi­cers, but would also “give the community more confidence in knowing that our police department has gotten aggressive enough” to engage in diversity training based on an understanding of history.[3]

Citing the Nashville Public Library program’s importance in the midst of a wave of police killings, U.S. News and World Report ran an article focused on the role educator and peace activist Bernard Lafayette played in the program. A vet­eran of the Nashville Movement of the early 1960s, Lafayette speaks internation­ally about his own training in nonviolent direct action protest, which happened when he was a student in Nashville. Following that experience, Lafayette went on to leadership positions in both the Student Nonviolent Coordinating Committee and the Southern Christian Leadership Conference, among others. His involvement in the Civil Rights and a Civil Society program, then, adds to its credibility. Lafayette expressed his hopes that programs like the one at the library will help new recruits better understand their role as protectors. He later noted, “There is no separation between police and community.” The veteran activist is glad to be associated with training that encourages law enforcement officers to do more than simply stop shootings, but to create a sense of community in the car­rying out of their work.[4] 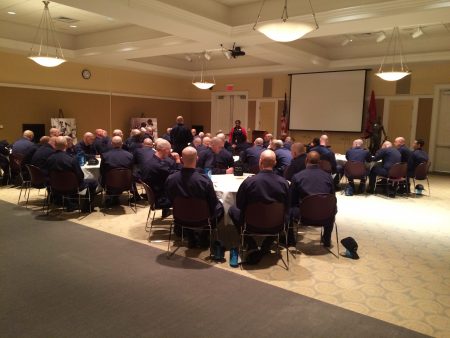 Iconic photographs from the Civil Rights Movement serve as backdrop to training provided to MNPD officers by staff of the Nashville Public Library’s Civil Rights Room.

Nashville Public Library’s Special Collections Division intends its Civil Rights Room to be a safe space for difficult conversations about race and injustice, particularly for officials charged with the safety and welfare of the public. Participants in the Civil Rights and a Civil Society program overwhelmingly agreed the program was pertinent to their jobs and would help them build relationships with the community. In fulfilling their aim to offer space and programs to the general public or special groups, however, the program does more than educate. Civil Rights and a Civil Society also sup­ports the “telling and appreciation of… stories of marginalized people whose experiences challenge the racial privilege of the majority and strengthen the power of minority communities.”5

In so doing, the program makes a novel contribution to the history field and serves as a model. Its creation and success results not from the space in which the training happens, but from the power of stories brought forward for mutual con­sideration by the participants.

About the AASLH Leadership in History Awards

AASLH bestows Leadership in History Awards to establish and encourage standards of excellence in the collection, preservation, and interpretation of state and local history in order to make the past more meaningful to all Americans. By publicly recognizing superior and innovative achievements, the Leadership in History Awards serve as an inspiration to others in the field. Learn more, browse past winners, and submit a nomination here.

[5] Jennifer B. Kahn to AASLH Leadership