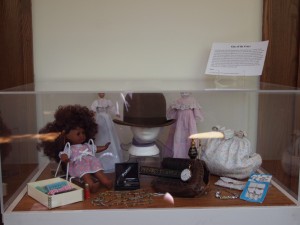 What started as a blog post here on SMOC has taken on a greater life outside of SMOC. After writing “Fighting Homophobia in Stealth Mode” in June 2012, I republished the article in the Morrison County Historical Society’s newsletter under the title “Tackling Big Issues in Small Museums.” This article was then picked up and published by the Morrison County Record, our local newspaper. The story continues with this article, which I wrote for the last issue of the Morrison County Historical Society newsletter. It is reprinted here for the consideration of SMOC members because its origins are here. For more of my reflections, read the third post in this series. – Mary Warner

Since the publication of the last MCHS newsletter, the Morrison County Record reprinted its front page article, “Tackling Big Ideas at Small Museums,” regarding the transgender essay and exhibit we have on display as part of our “What’s It Like  […] in Morrison County?” essay project. After the article appeared in the Record, we received the following anonymous letter:

I was indeed surprised and saddened to read your recent article in the Record — for many reasons. 1) I am a Christian who believes in a God who doesn’t make mistakes. I am offended by reading such articles that insinuate such. A confused identity on the part of the individual doesn’t make for a mistake in the creation. I fear the future where I might encounter a “historical” essay by some person who finds himself (herself) attracted to the body and personality of a child — another confused identify, [sic] although admittedly leaves a victim, but still a deviation. 2) This essay is totally devoid of history. By any stretch of the definition of history, I am surprised and disappointed that you would use the well-established platform of history to further such an agenda. Where is the historical value? 3) I feel this is a poorly disguised attempt to indoctrinate the public to aberrant sexual orientation. I personally know of two counseling agencies, locally and nationwide, who successfully guide such individuals to a healthy, clear understanding of themselves.

The weak attempt to suggest a return to a “light” or “neutral” subject such as putting up pickles is really bad journalism, an intended patting of the wound. Leave the polarizing of moral issues to the political arena, please. They do a very good job of it and you are no match. I’ll be watching for display of solid educational historic enlightenment in the future.

Unfortunately, you just lost my financial support. I will share this article with other like minded people who hopefully will remove theirs also.

In light of this letter, I think it important that we discuss exactly what history is and what it’s supposed to do. Let’s start with the mission of the Morrison County Historical Society, which is similar to most of the missions of history organizations around the state. MCHS is a nonprofit organization devoted to the preservation and sharing of Morrison County’s history.

Nowhere in that mission does MCHS indicate it shall preserve only history which meets the moral standards of a selected group or individual. Indeed, to be true to history, which is a record of human activity, we must collect representative samples of all history, including the parts that make us uncomfortable.

Can you imagine a world in which we erase the history, our collective memories, of events related to every conflict, every war?  Wherein women fought and died for the right to vote, but we have no documentation of it? Wherein 38 Dakota were hanged in 1862 as part of the U.S.-Dakota War, but the stories of the tragedy were not saved? Wherein the atomic bomb was dropped on Hiroshima but we have no photos of it? Wherein grandchildren are denied answers to the secret of family murder because the newspaper didn’t cover the crime?

If history organizations were tasked with collecting only pleasant stories of the past, we’d have pretty slim pickings in our archives. Every newspaper would have to be gone through and articles dealing with anything anyone considered distasteful excised. This is the history of George Orwell’s “1984,” rewritten on the whims of everyone. Not only would it be inaccurate; it would be boring, like floating on a dreamy cloud in a static blue sky forever.

Given that we have been tasked with preserving as much of Morrison County’s history as we can and there are gay, lesbian, bi-sexual and transgender people living in our county, it would be irresponsible of us to ignore the experiences of an entire population. So, too, are we open to collecting history on those who believe people who are lesbian, gay, bi-sexual or transgender have “confused” identities. This anonymous letter will be added to our files, joining the transgender essay and the article that inspired it.

Morrison County’s history would not be complete if we concentrated only on the “big” stories, the births, deaths, and weddings, the conflicts, the politics, the confrontations, which brings me back to those pickles. A large part of our history is the mundane activity we engage in between the dramatic events of our lives. Many of us are putting up pickles in the fall, shoveling snow in the winter, planting gardens in the spring, and mowing lawn in the summer. These everyday stories are just as important to us as the experiences of minority groups in our county. Both are elevated to the same level of importance precisely because we do not have enough representations of them in our collections. We need these stories and we’re not being flip or “patting a wound” in juxtaposing the two.

Our goal in preserving and sharing Morrison County’s history is to allow all Morrison County residents to see themselves in our collections, to feel that they are  represented in the community’s collective memory. However, we do not and cannot promise to make everyone comfortable with that memory.