A treasured artifact from the Union Pacific Historical Collection has recently come to light after being in the Washington D.C. office for more than a decade without any real attention to its unique provenance and history. This small gold ring was given to Theodore Judah on his 29th birthday. It was created from a gold nugget found during construction of the Sacramento Valley Railroad. The ring bears a very faint inscription: “Sacramento Valley Railroad, March 4, 1855. First gold ever taken from earth in making railroad bank” along with his initial “J” on the face of the ring. While this ring is simple in style and design, Theodore Judah was not a simple man. 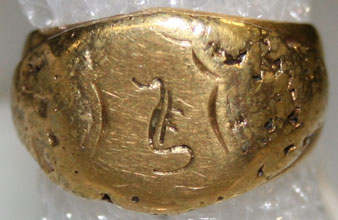 Theodore Dehone Judah was born in Connecticut but moved to New York as a child and there attended what would become the Rensselaer Polytechnic Institute. Even though he had to leave his formal schooling behind at the age of 13, he had developed a passion for engineering and railroads. By the age of 20, he had distinguished himself on several challenging projects throughout the Northeast including the Niagara River Gorge Railroad. It was this record that brought him to the attention of Charles Lincoln Wilson who was seeking financial backing and an engineer for the new Sacramento Valley Railroad. Judah and his wife made the arduous journey to San Francisco in 1854 and he began work immediately laying out the new line. The Sacramento Valley Railroad, the first commercial railroad west of the Mississippi River, was only 22 miles long and predominately carried the Pony Express mail from Sacramento to Folsom, CA

After 1855, Judah’s passion for a true transcontinental railroad was rekindled and he traveled to Washington D.C. to promote his cause. After carefully observing Congress over several months, he published, in January of 1857, his proposal for the endeavor entitled “A Practical Plan for Building the Pacific Railroad.” Judah was opposed to any legislation being involved in the project as he was certain, after watching Congress in action, that any such involvement would be, “the signal of defeat [for the project].” Rather, his vision stipulated, “…a great simultaneous effort be made throughout the entire country….that it is a people’s railroad.”

Theodore Judah’s vision of a people’s railroad received less scorn than his prediction of trains speeding across the country in excess of 100mph, pulled by enormous locomotives. This vision, coupled with his eager willingness to talk to anyone about the venture, earned him the moniker, “Crazy Judah.”

But it was Judah’s vision that came to pass, as huge steamers raced across the country in excess of 120 mph a mere 70 years later. While Theodore Judah did become the Chief Engineer for the Central Pacific Railroad, building the western end of the nation’s first transcontinental railroad, he did not live to see his dream become a reality. He died on November 5, 1863 in New York City of yellow fever, just a few months into the greatest engineering feat of the 19th Century and six years before his dream of a transcontinental railroad became a reality.