The New-York Historical Society’s “Talk to Us” Phone Booth

The New-York Historical Society’s “Talk to Us” Phone Booth

In the fall of 2005, the New-York Historical Society opened the exhibition Slavery in New York. The exhibition was extremely popular, partly because many visitors were fascinated and shocked by a dark side of a familiar story that they had never learned about in school.

But part of the reason for the show’s success was that visitors had very intense personal reactions to the content and the New-York Historical Society wanted to capture those reactions.

A video response booth was placed at the end of the exhibition where visitors left many invaluable comments and stories some of which were edited into a highlight reel that was integrated into the exhibition. 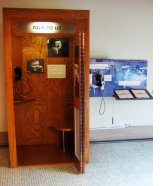 In the following years, we used the video response booth in several other exhibitions, but none generated the same volume or quality of responses that it did in the Slavery show.

We came to realize that the success of the response booth was tied not only to its ease of use and placement in the space, but more so to the types of reactions visitors have in an exhibition. The more personal the themes of an exhibition—themes that visitors can relate to from their own lives—the more likely they are to want to share their reactions and stories.

For our current exhibition, WWII & NYC, we installed an audio recording element in hopes of capturing visitor feedback and especially stories from visitors who lived through the war. We constructed a small phone booth with a sign that reads “Talk to Us.”

Visitors enter the booth and follow very simple printed instructions which are basically, “Pick up the phone, leave your message and then hang up.” The 1940s-era handsets give the booth an authentic feel. For visitors with mobility issues, we have an additional phone set up just outside the booth at a lower height.

Our AV specialist wrote software that runs on a Mac Mini to capture the incoming audio from the handset. The system places the recorded WAV files into a folder on the server where they are listened to, sorted into categories (praise, gripes, comments, stories) and then finally transcribed and entered onto a spreadsheet shared with various staff members including the show’s curator.

The response has been phenomenal!

Thus far we have captured nearly 400 recordings with wonderful feedback about the exhibition and amazing stories from those who lived through and fought in the war.

In addition to selecting an exhibition that is conducive to eliciting personal stories, what has made the system so successful is the simplicity of the feedback mechanism, its strategic placement at the end of the exhibition and designing it in such a way that it feels like the visitors are a part of the exhibition.

Older visitors enjoy the nostalgia of walking into a phone booth and sliding the door closed behind them.

Younger visitors are intrigued by its novelty.

And all visitors are excited to so easily leave their feedback and become a part of the exhibition.

Chris Catanese is director of museum administration for the New-York Historical Society Museum & Library, in New York, NY. You can reach him at [email protected].