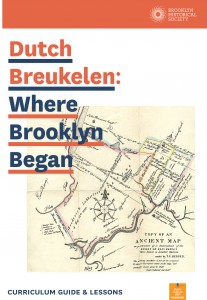 “Dutch Breukelen complements and enhances a growing body of curricula about colonial-era New York City — much of which focuses on the growth of New Amsterdam on the southern tip of Manhattan,” said Emily Potter-Ndiaye, Director of Education for BHS. “But Brooklyn’s story is unique, and has regional, national, and even international repercussions.”

The dynamic curriculum enables learners to investigate case studies of Brooklyn’s five original Dutch towns: Breukelen (Brooklyn), Boswijck (Bushwick), Nieuw Amersfoort (Flatlands), Midwout (Flatbush), and New Utrecht (Nieuw Utrecht). Along the way, they will meet a range of colonial-era residents, for example Francisco de Neger, who began his life in the New World enslaved by the Dutch West India company, but successfully petitioned for his freedom and became a founder of the town of Boswijck (today’s Bushwick). These investigations have broad resonance about power-laden interactions in the communities of the New World. The topics included will address formative questions, including:

“We are thrilled to support Brooklyn Historical Society in its development of this ground breaking curriculum,” said Rob de Vos, Consul General of the Netherlands in New York. “Using the innovative materials made available on-line, students will be able to explore the many ways in which Dutch culture shaped the city we know today.”

Dutch Breukelen: Where Brooklyn Began is made possible through the generous support of the Dutch Culture USA program by the Consulate General of the Netherlands in New York. It was produced by the Education Department at Brooklyn Historical Society under the project management of Manager of Teaching and Learning Shirley Brown Alleyne in collaboration with curriculum writer Claudia Ocello, archaeologist Alyssa Loorya, graphic designer Carl Petrosyan, and BHS’s Library and Archives and Public History Departments.

Dutch Breukelen: Where Brooklyn Began is available on brooklynhistory.org  free of cost.

Founded in 1863, Brooklyn Historical Society is a nationally recognized urban history center dedicated to preserving and encouraging the study of Brooklyn’s extraordinary 400-year history. Located in Brooklyn Heights and housed in a magnificent landmark building designed by George Post and opened in 1881, today’s BHS is a cultural hub for civic dialogue, thoughtful engagement and community outreach.