I was recently thrown for a loop when a member of my team suggested that I present at an upcoming conference with the theme “When History Doesn’t Matter.” When making the suggestion they said something to effect of “Because that’s your thing!”

Wait… what? I know I’ve only been with the Ohio History Connection for two years, and I know before this I was working at a Natural History Museum…which is a bit different. But really? Do they think that I think that history doesn’t matter?

Then I thought about it. And they were right. Let me explain… 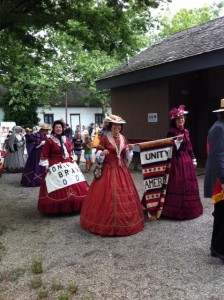 Ohio Village is a replicated town originally constructed in the bicentennial boom that gave us so many living history sites. At first the site interpreted daily life in the 1840s. After closing for several years, the site reopened in 2012 with a focus on the 1860s. Interpretation moved through the Civil War, year by year until the 150th anniversary in 2015.

With this end in sight, in 2014 we took a step back and asked “what’s next?” Do we stop in 1865 and just go into a loop? Do we start the Civil War all over again? Where in time are we going? We didn’t have the confines of a “real” site with provenance to guide us. The freedom felt a bit like standing on the edge of a cliff.

In my role as Site Director for Ohio Village, one of the first projects I undertook with my fantastic team was a SWAT analysis exploring the experience that we craft for the public. I wanted us to figure out what our game was first. Then we’d rewrite the rules. Over the course of several department meetings, and a few workshop-style lunches, we hashed out the framework. We looked at our organizational mission. We asked ourselves if that was the goal, then how did our work make it happen?

This led to articulating a philosophy about our work. At the core of this philosophy were shared tenets of dynamism, dialog, connection, questioning, play, and the keystone of relevancy. We are embracing our talent as storytellers to start a relationship.

History provides us with the foundation for those stories, but we realized that our work had nothing to do with learning a specific history. It wasn’t about the Civil War, or even the 1840s. It was about how history works, and how stories work. That’s our game. That’s the magic. 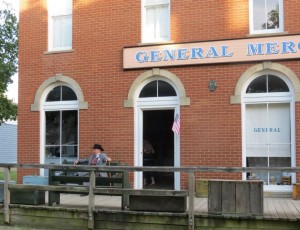 The passion that these conversations unlocked among our team was palpable. The energy is pushing us forward as we prepare to travel in time. A trip that will cost a lot of money, take a lot of work, and needs to be complete in a few short months.

Are we worried, sure, maybe about finding enough functioning cook stoves of the right vintage. But not about the story.  Why should we worry? History doesn’t matter.  After all, it’s not just “The History” that matters, it’s what we do with it, and how we engage our audiences with it.