The George C. Marshall Foundation, Lexington, Virginia, member of AASLH since 2008, announces the release of volume seven of The Papers of George Catlett Marshall. Publication of volume seven concludes the multi-year, multi-award-winning documentary editing project that details the official written record of one of the most influential Americans of all time.

“Even today George Marshall’s portrait graces many walls in Washington, serving as an inspiration for leaders from administration to administration. The publication of this volume, and indeed of the entire seven volumes, reminds us again of why he was so important to our country and world order then and now,” said Dr. Rob Havers, president of the Marshall Foundation. 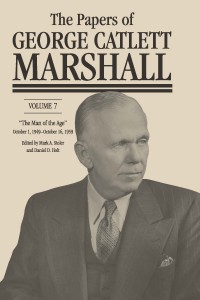 “Marshall is a key figure during many of the world events of the first half of the 20th century.  These Papers, now concluded, and the recently begun Marshall Legacy Series that complements the Papers project present Marshall’s greatness for all to understand and appreciate,” he added.

The seventh volume, “The Man of the Age,” dated Oct. 1, 1949 to Marshall’s death on Oct. 16, 1959, covers the final years of Marshall’s life when he served as secretary of defense from September 1950 to September 1951 following a year as American Red Cross president and other periods when the so-called retired Marshall was still very active publicly.

Dramatic swings in fortune for US and UN forces in Korea consumed him as defense secretary, yet Europe remained Marshall’s strategic focus and with it the establishment of a NATO military command, efforts to convince the French to accept German rearmament, congressional approval for a major US military buildup, and a Mutual Security Program for America’s allies. Marshall also participated in the decision to relieve General Douglas MacArthur in Korea, an action that sparked public uproar and a Senate investigation.

In 1953 he led the US delegation to the coronation of Queen Elizabeth II and then became the first professional soldier to win the Nobel Peace Prize, which is a tribute to the Marshall Plan. Through it all, he maintained an extensive correspondence with national and international leaders. When he died on October 16, 1959, George Catlett Marshall was hailed by many as the nation’s greatest soldier-statesman since George Washington.

U.S. secretaries of defense and other high ranking civilian and military leaders who followed remain respectful of the Marshall legacy and all that he accomplished.

“But, more often than not, on the big things–those that really mattered–Marshall’s strategic vision yielded profound wisdom: about his country, about the world, about the nature of man,” said Secretary of Defense Robert Gates in 2009 when receiving the Marshall Foundation Award in Washington.

“In the immediate aftermath of World War I, he knew already that the 11th hour of the 11th day of the 11th month signified only an interlude between great and furious storms. So he started writing down the names of all competent officers he had met in his various posts. Years later, those officers would lead the American Army in World War II.

“His foresight was, I believe, rooted in his acceptance of man as a flawed creature, and an international landscape that reflected that stark and unfortunate reality–truths we can still absorb today….In his willingness to serve America and the world throughout the great travails of the 20th century, George Marshall more than affirmed the purposes to which he devoted himself. And in persisting in this affirmation for all his living days, he made of himself an ideal that we should all aspire to emulate,” he added.

Publication of The Papers of George Catlett Marshall has been supported by grants from National Endowment for the Humanities (NEH) and National Historic Publications and Records Commission (NHPRC) among many generous donors to the project including the Carnegie Corporation of New York, the Andrew Mellon Foundation, the Miller Family Fund, FedEx Corporation, Dr. Scholl Foundation, Furthermore Grants and the J.M. Kaplan Fund, the Ambrose Monell Foundation, BAE Systems, Mark Baruch and the Baruch Family Foundation, Susan and Jack Rudin, May and Samuel Rudin Family Foundation and L.F. “Gerry” and Marguerite Lenfest and the Lenfest Foundation since it was started in the late 1970s.

As with the first six volumes, the current volume was published by Johns Hopkins University Press, Baltimore and London.  Volume 7 and the other volumes can be purchased in the Marshall Museum Shop or online at www.marshallfoundation.org.

June 22nd, 2018
Speak Up for the NEH + More Ways to Advocate for History and Museums (Weekly Dispatch)