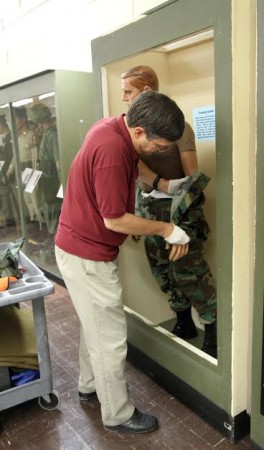 FORT SAM HOUSTON, Texas – Renovations and construction continue in the east wing of the historic Quadrangle in preparation for the relocation of the Fort Sam Houston Museum to its new home, co-located with the headquarters for U.S. Army North (Fifth Army). The museum closed its doors to the public so the staff could conduct inventory and prepare for the move. The last tour at the old location took place Oct. 24. The museum is scheduled to re-open in April.

“(The old museum) was originally built as a mess hall in 1905,” said Jacqueline Davis, director of the Fort Sam Houston Museum. “We moved here in 1976 and outgrew this space years ago, but we had nowhere to move to until Army North invited us (into) the Quad.”

“We are happy that we can offer the museum a home in the Quadrangle,” said Lt. Gen. Perry Wiggins, commanding general, U.S. Army North, and senior commander Fort Sam Houston and Camp Bullis. “The Quad is the most historic place on Fort Sam Houston, so it is fitting that the museum moves here.” 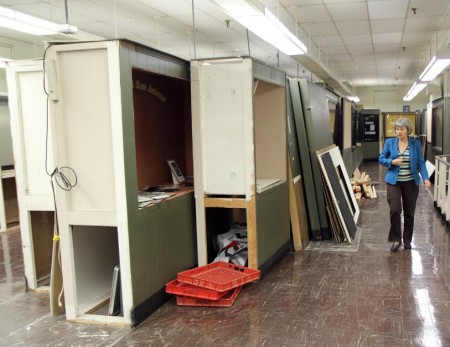 The new museum will have more than three times as much space as it previously did, taking up most of the east wing of the Quad. “This museum is an evolution that started in 1976 in this building,” said Davis, speaking about the old location. “It evolved over the years with changes in technology, changes in history, and changes in methods of doing things, so it was kind of disjointed because of that.”

However, the museum staff has decided to give it a newer look and organization to go with the new location to take advantage of more modern methods of museum design and presentation. “The new museum will be set up in more of the minimalist look that you find in art museums,” said Davis. “I want visitors to be literally surrounded by history,” she said. With this idea in mind Davis is working with Suzanne McGarraugh, an exhibit design specialist who has designed museums all over the world, on setting up the exhibits here.

“Museums used to look like a store front,” said Davis. “You had a case with all the artifacts and information in it to draw people’s attention.” Davis said her vision for the new museum is to keep as much clutter out of the display cases as possible, and to mount the artifacts so people can walk around and look at the exhibits from all sides and angles. “I hate it when I can’t see the backs of things,” she said. She said that being able to see exhibits from all angles will allow visitors to see things they might not see if viewed only from the front. While the new museum will minimize the amount of text in and around the displays, there will be some verbiage explaining what the artifacts are, as well as display panels providing information about the story line; it is a history museum after all.

“It’s a better way to tell the story of a place,” said McGarraugh of the minimalist look. “This way people don’t get bogged down by little-bitty things.  They can get into the details if they want to, and they will find something new every time they visit.” Davis said her desire to reduce the amount of clutter in the cases will make viewing the artifacts more enjoyable. “Most people, I expect, don’t like to read a bunch of things in museums,” she said. “When most people first come in, they will just look at the artifacts, which will be in chronological order,” said Davis. “However, they may think, why is that there? Or what is that thing? Or why does a museum about the history of the Army in Texas have displays about France and Spain? Then they can read about it if they want to. It’s the item that catches our interest, not the words.”

Since the new museum will have more space, it will allow the staff to take its guests on a grander tour of San Antonio’s military history then the  previous museum could. While the old museum took visitors through the history of the Army in San Antonio – from the establishment of the Post at San Antonio in 1845 to the present day Fort Sam Houston, the new museum will take visitors through the history of the military in San Antonio from its earliest days supplying the Spanish Army as it defended the border between New Spain and French Louisiana. That is now the border between Texas and Louisiana.

“The … concept that there is a border that we have to watch is something that has been going on in this city since the day it was founded,” said Davis. The new museum will trace the evolution of this continuous mission as borders and countries changed. Other exhibits will include: the evolution of the installation from an outpost, to an Army community within San Antonio and finally to the Joint Base San Antonio era; the relationship between San Antonio and the Army; and the growth of the family support system within the Army.