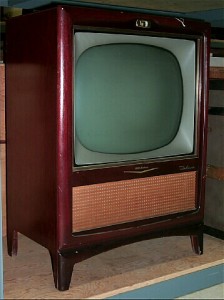 Television:  A device that converts incoming television signals into the original images and their associated sounds. (Definition from the AAT.)

My cable company recently made the big conversion from standard television transmission to HDTV, so now we’re living in a world of high definition. Nomenclature, on the other hand, isn’t even low definition, it’s no definition!

Three reasons exist for this state of affairs. The first is that Nomenclature’s content depends on a group of dedicated volunteers whose time is limited. Although the Nomenclature Task Force enjoys its work in its own geeky way, imagine the effort it would take to write and compile definitions for nearly 14,000 object terms! This much free labor isn’t an option here.

The second reason has to do with what Nomenclature users are willing to pay. The Nomenclature 3.0 book is about 750 pages long as it is; some of our colleagues in Canada refer to it as “the big green monster!” If we were to add definitions, we’d have to produce a multi-volume set, and I don’t imagine many institutions would care to pay the hefty price that would command. Plus, I’m sure many would agree that having one book is more convenient than schlepping multiple books around as you catalog.

The third reason is that numerous dictionaries and other reference sources exist in print and online that shed light on the meanings of terms featured in Nomenclature. I’m sure many catalogers have their preferred go-to source materials for finding definitions. There are a couple of online authorities I recommend.

The Art and Architecture Thesaurus (AAT) from the Getty Research Institute is my first stop. The AAT is a hierarchically organized controlled vocabulary that, despite its name, includes terminology for a wide variety of objects.  Although the AAT doesn’t include every term in Nomenclature 3.0, the AAT did serve (and continues to serve) as an important reference source for the Nomenclature Task Force, and quite a number of new terms in Nomenclature 3.0 were inspired by the AAT.

It’s easy to look up the definitions of terms in AAT, which does a good job in distinguishing the differences between similar or related items. As an example, take “couch” and “sofa,” two terms we often conflate. The AAT’s definition of couches reads: “Long seating forms with a back support and one end; primarily used for reclining rather than sitting. Distinct from ‘sofas’ which have a back and two ends and are primarily used for sitting rather than reclining.”

Getting back to our Canadian colleagues, another online resource worth investigating is the Parks Canada Descriptive and Visual Dictionary of Objects. This dictionary is a vocabulary standard used throughout the Great White North and it is based on Revised Nomenclature. The folks at Parks Canada took that version of Chenhall’s standard a couple of steps further. Not only does it include terms in French as well as English, it also provides physical and functional definitions and illustrations for a great number of terms.  This project is a work in progress.

In case you’re wondering, Parks Canada would like to update the Descriptive and Visual Dictionary sometime in the future to be more compatible with Nomenclature 3.0, or whatever version of Nomenclature is most current at that time, resources permitting.  Parks Canada’s dictionary is hosted online by the Canadian Heritage Information Network (CHIN), and I’m proud to say that we have not one, but three Canadians on the Nomenclature Task Force – one from CHIN and two with Parks Canada vocabulary experience.

These are but two examples of sources for definitions. If you find other resources handy for defining broad historical collections, let the Nomenclature Task Force know; we might just post a list on this community site.