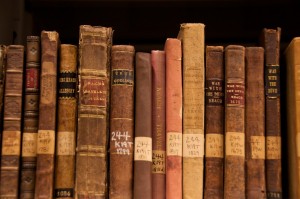 The American Baptist Historical Society (ABHS), established in 1853, is the oldest Baptist historical society in the United States and holds the largest and most diverse collection of Baptist materials in the world. ABHS holdings of special interest to those researching Baptist history at the local and state levels include original church records, published church histories, and records of the American Baptist Home Mission Society. However, as any frustrated genealogist will attest, researching Baptist records can be challenging. Birth records were never kept because Baptists practice believer’s baptism by immersion rather than infant baptism; marriage records are rare because marriage is not considered a sacrament.   And because Baptists have no ecclesiastical hierarchy to set administrative (or any other) policy for the denomination, each Baptist congregation decides for itself what sort of records it will keep; how they will be kept; and where or if they will be archived. Given their historically fierce insistence on the complete autonomy of the local congregation, one wonders how Baptists ever managed to organize into any sort of denomination at all! But they did, and one of the best records of how they did it is found in a remarkable set of grass-roots annual publications known as church association minutes.

Baptist associations formed around the voluntary membership of churches in a particular geographic region for the purposes of mutual support and encouragement, as well as to combine resources for common goals.  Historically, Baptists associations in the United States were an extension of the annual meetings held by Pennsylvanians beginning in the late 1600s for worship, fellowship, and doctrinal debate. The first formal Baptist association was organized in 1707, when five Philadelphia-area churches in Pennsylvania, Delaware, and New Jersey founded the Philadelphia Baptist Association.  Soon churches as far south as Charleston and north to Maine were part of this first association. By 1780, thirteen associations had been established in the Colonies through which Baptists maintained connections that facilitated the establishment of new churches, education and ordination of new ministers, and discussion of all facets of Baptist belief and practice. Thus, these associations constituted the earliest form of Baptist denominationalism in the United States.  Baptist churches became increasingly numerous and organized in the 1800s after the bold Baptist missionary venture of Ann and Adoniram Judson to Burma in 1812 inspired a vision of how associated churches could combine resources for the support of foreign and home missions without sacrificing the autonomy of the local congregation.  This impulse for missions, both at home and abroad, united Baptists and forged the character of the denomination at the national level.

From their beginnings in 1707, Baptist associations have met annually and published the resulting proceedings in their minutes.  Researchers interested in tracing the history of the growth, development, or demise of their local Baptist congregations will find a wealth of information in these brief (usually 8 to 30 pages) annual reports, the format of which had become fairly standardized by the 1830s.  Each member congregation in an association reported statistics on church membership and property; Sunday school attendance; and funds contributed for missions, benevolence, and special projects. Committee reports, church histories, and brief state-of-the-congregation reports (often called the “digest of letters”) put narrative meat on the bones of these statistical figures. For example, in the Minutes of the Sixteenth Anniversary of the Middle Georgia Baptist Association (Augusta, GA, September 1881), the education committee made the following recommendation regarding the education of women:

“We have noticed the progress of education for the last 12 or 13 years and we see the good it has done for our people. We furthermore see the great need of having more of it still. Therefore we recommend to the Association to use every exertion that lies within its power to educate her ministers, teachers, sons and daughters; especially the lovely daughters of this Association, for we believe we can do a great good by educating our daughters.”

In support of the committee’s concern, the Middle Georgia Association minutes included an open letter from Frank Quarles, President of the Missionary Baptist Convention of Georgia, to the Baptists of Georgia and the public at large regarding an opportunity to open a women’s school:

“…. Oh, will you hear? Will you heed? Will you act? The colored Baptists of Georgia need a building at the Atlanta Baptist Seminary for the accommodation of female students. At present females cannot be taken into the school, though we have many that are anxious to join. A school for females has been opened in the basement of Friendship Baptist Church Atlanta Ga. And though none under 15 years were admitted the enrollment soon reached 80 scholars. This school, under the name of the Atlanta Baptist Female Seminary, is already exerting a large influence in strengthening our denomination work. The basement in which it now meets is unfit for a permanent school-room. The health of our daughters is of more value than a few paltry dollars. To you we appeal for help. Will you give it, or will you make some frivolous excuse and keep your money in your pockets? We ask you in God’s name to open your hearts, open your pocket-books, open your treasuries and give the money to erect a building for our girls …. You have appointed us to attend to this work, and you must remember that we can do nothing only as you furnish the means. As you love your Saviour, as you love His cause, as you love your fellow men, as you desire the smiles of God and the approval of your own conscience, help us and help us now.”

Recognizing the great historical significance of Baptist associations, the American Baptist Historical Society has made a concerted effort to collect association minutes from all the various Baptist denominations (American Baptists, Southern Baptists, Free Will Baptists, etc.).  Currently ABHS holds approximately 1,700 linear feet of association minutes from all 50 states and Puerto Rico, as well as from countries where American Baptists have maintained missions or relationships, e.g., Mexico, New Zealand, Nicaragua, Nigeria, Burma (Myanmar), El Salvador, Norway, Wales, and others. These holdings date from 1707, through the heyday of associations from 1820 through the mid-20th century, and up to the present. Researchers interested in using ABHS association minutes or other parts of our Baptist manuscript and archival collections are invited to learn more by visiting our website at www.abhsarchives.org.