Water Has a Memory: The Impact of Sea Level Rise on the Historical Resources of Strawbery Banke Museum

Water Has a Memory: The Impact of Sea Level Rise on the Historical Resources of Strawbery Banke Museum

Strawbery Banke Museum, located four hundred feet from the banks of the Piscataqua River in downtown Portsmouth, New Hampshire, is a nine-acre living history museum that maintains thirty-seven historic houses, most on their original foundations.  One house, the Shapley Drisco House, was built in 1795 along what was a tidal inlet called Puddle Dock. 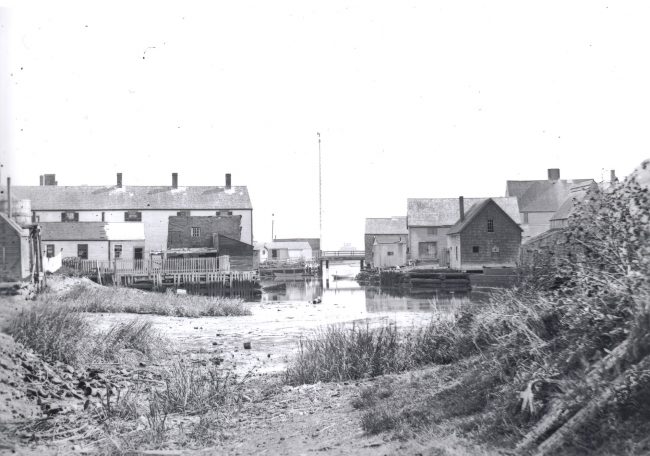 The tidal “Puddle Dock” inlet in 1900, where Strawbery Banke Museum now stands, before it was filled in.

The inlet was filled in in circa 1905. This two story structure, built in a typical colonial architectural style, serves as an important interpretive “change over time” example for the museum, with its first floor interpretation showing two time periods in furnished spaces: 1795 and 1955. 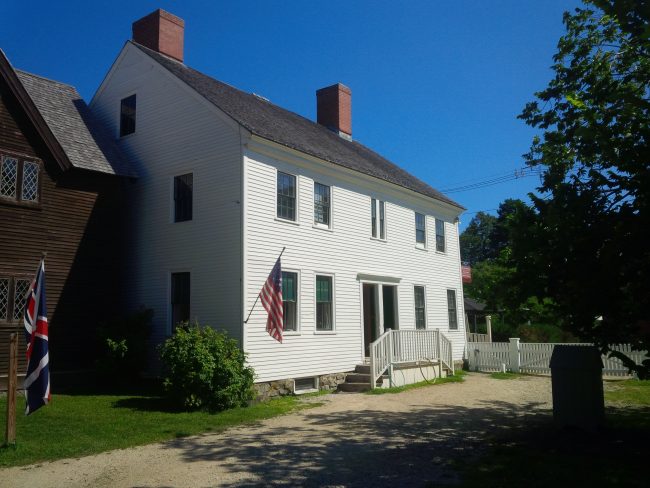 The building also serves an important income-producing purpose for the museum by supporting rented commercial space on the second floor.

In 2011 the museum was chosen to be a test site for a University of New Hampshire study to assess sea-level rise vulnerability of coastal resources. The Shapley Drisco was chosen due to the evidence of rapid deterioration in both the structure and the house contents. Data we collected shows extremely high levels of relative humidity in the basement of the house. 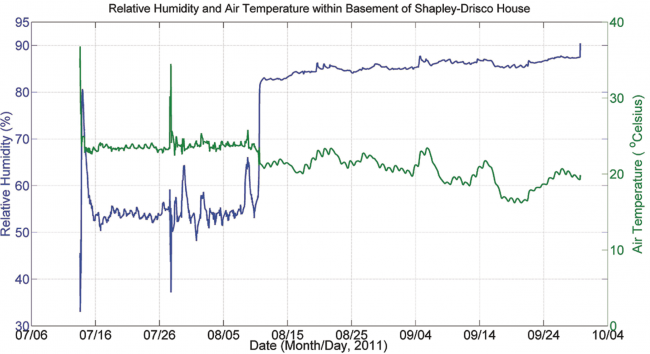 Graph of relative humidity measured in the basement of Shapley Drisco House.

These values support the visual evidence of rapid decay to the structural  timbers and brick elements of the house. 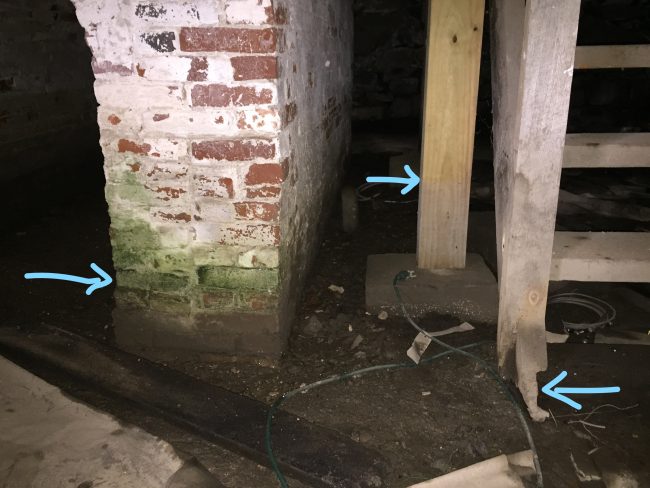 Salt water encroachment evident in the brick and timber elements in the Shapley Drisco House basement.

The high RH, however, cannot be explained as due only to typical environmental conditions.  Further investigation indicated that the basement experienced standing water with some unknown frequency. In 2017, the museum took time-lapse photos of the basement during a King Tide (astronomically high tide) event and created this video of what occurred. It is clear that, for over a decade, this house has been impacted by sea water during times of storm surge and now, due to sea-level rise, at times of astronomically high tide cycles. During these tide cycles and historic winter storms (such as the ones that hit the region from November 2017 to March 2018), we know the basement filled with salt water to levels ranging from sixteen inches to twenty-seven inches.

The museum, in partnership with the City of Portsmouth’s Climate Change Vulnerability Assessment Project, will look at ways to mitigate this impact. The preservation of this house and its important mission depend on it. The debate going forward will be to define what historic fabric will be lost in this mitigation process. Typical preservation standards and practices will not be able to overcome this new threat. The museum has already lost important historic fabric in the Peter Lowd House, which experienced the same impact up to two years ago. The “Summer Kitchen” (basement fireplace hearth) was lost due to salt water deterioration of the brick. Granite was used in its place to prevent future wicking of the salt water. 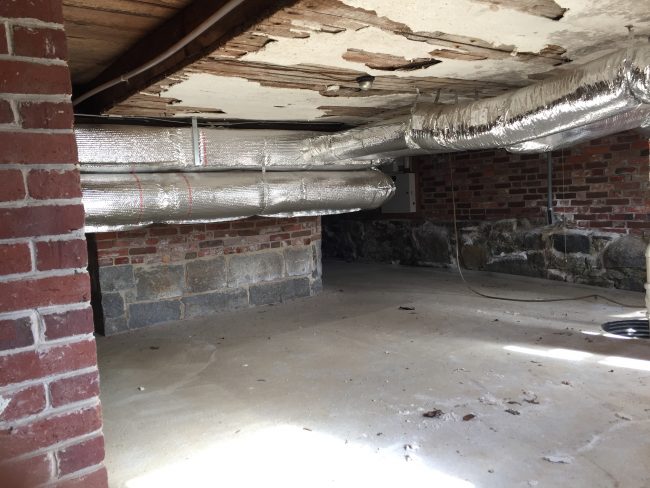 Strawbery Banke Museum is using this experience to engage the greater community. Its partnership with the City of Portsmouth is a vital one that helps us understand the greater threat and be present as solutions are discussed.  The solution to this new and significant threat will come from community cooperation and conversation.  We must work together.